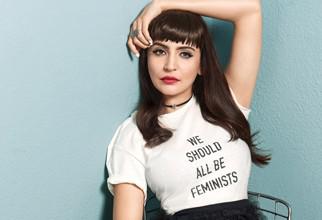 Celebrities entering into legal mess with the BMC officials is not a new thing now. After Kapil Sharma and Arjun Kapoor were accused of illegal construction in their respective apartments, it is now Anushka Sharma who has landed into such trouble. BMC has issued a legal notice to the actress for installing a electric junction box on her floor which is illegal. A neighbour filed a complaint against her after which the notice was issued. The neighbour also mentioned that the actress has forbidden several other laws the society.After an inspection by the BMC officials, the actress has been asked to remove the installed junction box. However the official statement from Anushka's office reads, "Anushka's family had taken all requisite permissions in 2013 itself before installing this junction box so they have not defaulted on any account. BMC has just responded to a complaint the ex secretary has put out there is no offence that has been committed."While the actress has denied all such things, further more details regarding the issue are awaited.FRIDAYMOVIEZ.COM is a chic movie portal bringing you the best of Bollywood and Hollywood in terms of the up-to-the-minute news, movie reviews and trailers, celebrity images, videos and profiles, exclusive inside information comprising original features, live event coverage, red carpet events, comprehensive archives and more.#G-1, New Udyog Mandir 2 Moghul Lane, Mahim (W) Mumbai 400016 India

04-18-2017 | Leisure, Entertainment, Miscel …
FridayMoviez
Magical trailer of Sushant Singh Rajput and Kriti Sanon's 'Raabta'
A much has been talked about Sushant Singh Rajput and Kriti Sanon's chemistry which heated up while shooting for their upcoming film 'Raabta.' The trailer for the much awaited film is finally out and is looking every bit promising. Kriti shared the trailer on her Twitter handle by tweeting, "A film thats too close to my heart..thrilled to share with you all..❤️❤️ Here's the trailer: http://bit.ly/Raabta Hope u guys
04-12-2017 | Leisure, Entertainment, Miscel …
FridayMoviez
Here is the monsoon song 'Baarish' from 'Half Girlfriend'
Rains have always played a significant role in Bollywood movies. Include one romantic rain song and your film is hit. While we already have some of the most romantic rain numbers, the newest addition to it is the 'Baarish' song from 'Half Girlfriend.' The first song is finally out and Shraddha Kapoor shared it on her Twitter handle. She tweeted, "Some songs make you fall in love 😍Here it is
04-07-2017 | Leisure, Entertainment, Miscel …
FridayMoviez
Check out Noor's emotional side in 'Hai Zaroori' track
Sonakshi Sinha as 'Noor' gave a sneak peek into her messy life while juggling between office and her home in the trailer and the songs which are released so far. Now another song is released from the film titled as 'Hai Zaroori.' Sonakshi shared the song on her Twitter handle and captioned it as, "Heres the soulful #HaiZaroori by @AmaalMallik sung beautifully by @PrakritiKakar and written by @manojmuntashir." The song shows
04-07-2017 | Leisure, Entertainment, Miscel …
FridayMoviez
Chapter 4 of 'Meri Pyaari Bindu'
While the first three chapters of Ayushmann Khurrana and Parineeti Chopra starrer 'Meri Pyari Bindu' tickled our funny bones, the fourth chapter has already made its way. Parineeti shared it on her Twitter handle by tweeting, "So easy to scandalise Abhi's MOM!!! Hahhahahaha here is Chapter 4 :) Bindu v/s Ma 😎😎😎 #MeriPyaariBindu." The chapter 4 shows Tom and Jerry equation between Bindu and Abhimanyu's mom. Bindu, who is Abhi's neighbour

12-03-2020 | Advertising, Media Consulting, …
HTF Market Intelligence Consulting Pvt. Ltd.
The Continuing Growth Story of Professional Salon Care Market
Global Professional Salon Care Market Report 2019 is latest research study released by HTF MI evaluating the market, highlighting opportunities, risk side analysis, and leveraged with strategic and tactical decision-making support. The study provides information on market trends and development, drivers, capacities, technologies, and on the changing investment structure of the Global Professional Salon Care Market. Some of the key players profiled in the study are CavinKare Group, Jawed Habib,
06-27-2019 | Fashion, Lifestyle, Trends
Scroll Mantra Private Limited
Have a strappy, lacey summer with PARFAIT’s End of Season Sale
Calling out to all the shopaholics: it’s time to give your wardrobe a much-needed makeover Just when you thought summer couldn’t get any better, PARFAIT announces their 50-days end of season sale. Get ready to stock your drawers with the latest lingerie collection by PARFAIT, as they debut their End-of-season-sale in India, beginning from 10th June – 31st July. Score cool deals and awesome discounts when you shop at shop-in-shops and multi-brand
03-30-2017 | Leisure, Entertainment, Miscel …
FridayMoviez
Regal Cinema to tribute Raj Kapoor before its final shut-down
Situated in the heart of the capital, Delhi's Regal cinema is all set to shut down and will be renovated into a multiplex. Regal, a single screen theatre of almost 8 decades standing tall in Connaught Place will also pay a tribute to the late superstar Raj Kapoor by showcasing his two movies 'Mera Naam Joker' and 'Sangam' before it's final shut-down. One of the owners of the cinema hall were
03-06-2017 | Leisure, Entertainment, Miscel …
FridayMoviez
Watch Anushka Sharma's Rap in the Song 'Naughty Billo'
Anushka Sharma has tickled our ribs with the funniest trailer of her film 'Phillauri' which sees her in a friendly ghost avatar. So far the makers were appreciated for the songs released till date and with Diljit on board, the audience was waiting to hear his voice in a song. The wait is finally over and the party anthem 'Naughty Billo' in Diljit's voice is released. Bonus to it is
02-23-2017 | Leisure, Entertainment, Miscel …
FridayMoviez
First Wedding Song of the Year From 'Phillauri' Is Out
Anushka Sharma portrayed a friendly spirit Shashi in the official trailer of 'Phillauri' which released a few days back. While the trailer showed Shashi as ghost bride, it is not possible that the film will not feature a wedding song. Finally the wedding song of the season is out and Anushka shared it on her Twitter handle by tweeting, "Hey WhatsUp? Here's the bride with the 1st wedding song this
01-12-2017 | Leisure, Entertainment, Miscel …
FridayMoviez
Teaser Of Dabbo Ratnani's Calendar 2017
Like every year ace photographer Dabboo Ratnani is back with his calendar. A calendar which is hot, sexy and glamorous at the same time with top celebs from the industry posing on it. This is the 18th year of the photographer and the calendar. This time Dabboo's calendar will feature 24 celebrities including Amitabh Bachchan, Shah Rukh Khan, Hrithik Roshan, Abhishek Bachchan, Aishwarya Rai Bachchan, Ranveer Singh, Akshay Kumar, Priyanka
Comments about openPR
Your portal is fast, simple, and easy to use. Others may have more functions but they also demand more editing time, you have to preformat the text in order to achieve a good result etc. I think openPR is really fantastic!
Andreas Knepper, wallmedien AG