Honeytrap. An all female group exhibition at Strychnin Gallery 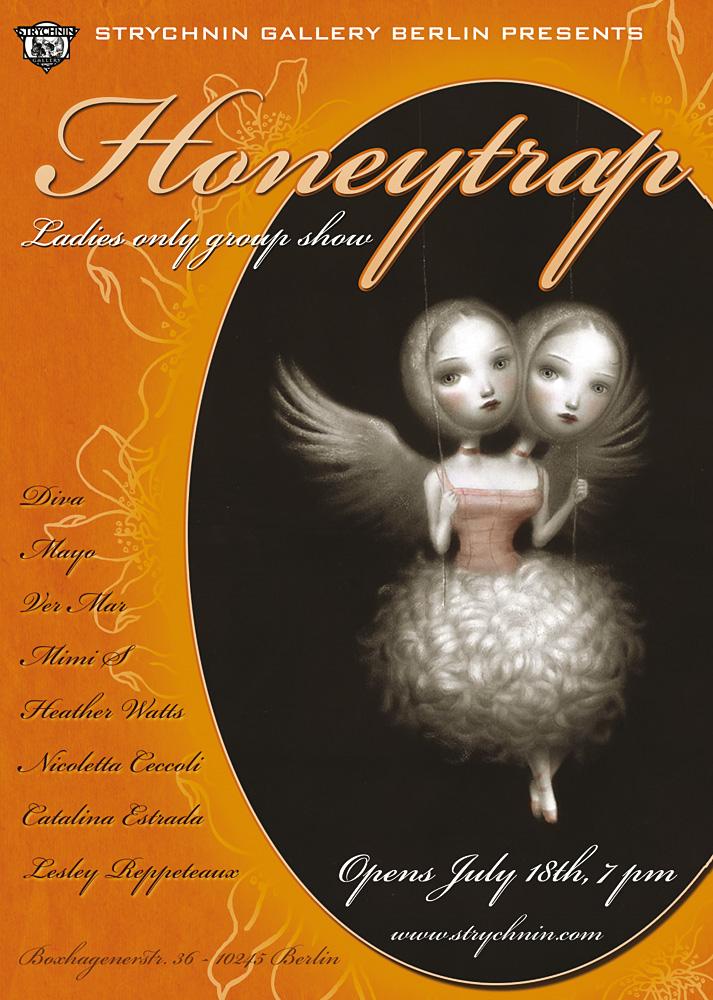 Starring women artists from over seven different countries. Opening reception at Strychnin Gallery Berlin on July 18th at 7 p.m. A coy, superior female agent seduces a male enemy and obtains his secrets. Cunningly employed charms enchant an unsuspecting victim – “honeytrap” is a term used to describe the process of seduction in order to compromise, obtain secrets, prove someone’s infidelity, or otherwise put someone in an exploitable position. Our idea of honeytraps is not only shaped by countless historical examples but also by popular culture such as movies, comics or espionage fiction: Honeytraps are an extremely popular plot device in all of these that mostly feature female agents trapping a male – just think James Bond and the countless times he had to fend off beautiful enemy spies, often the secret stars of the films. However, honeytraps have entered public consciousness long before then. For one thing, they also appear in the Bible: Judith gained access to the enemies’ camp through her beauty and innocent manner, and she managed to enchant Holofernes and to gain his trust without giving in to his advances, only to behead him in his sleep when he lowered his guard. This scene became a classic in the arts and has among others been depicted by Botticelli, Lucas Cranach, Peter Paul Rubens and Gustav Klimt. What Strychnin Gallery presents this July is a seductive international group show featuring all female artists from all over the world – art with a sweet dark twist.Opening night: July 18th, 7 pm Duration: July18th – August 10th 2008Strychnin Gallery Boxhagener Straße 36 10245 Berlin Opening times: Thursday -Sunday 1–6 pm, Saturday until 7 p.m. and by appointment PR Contact: Iris Bitter Phone: +49 30 9700 2035 production@strychnin.com www.strychnin.comWith galleries in three bustling hotspots – New York City, Berlin, and London – Strychnin Gallery is a playground for artists from all around the globe. It is a place where collaboration is encouraged, new projects are constantly developed and creativity is the one and only thing that truly counts. Owned by charismatic curator Yasha Young, Strychnin is dedicated to presenting emerging American artists to the European art world and vice versa. It features a variety of artists with particular individual styles rather than artists belonging to a collective “hip” movement. If you insist on putting a label on them, try lowbrow turned highbrow, pop surrealism or fantastic realism among others. Founded in Brooklyn in 1998, the gallery opened a European showroom in Berlin in 2002. The US gallery has since moved to a location in Manhattan’s Chelsea district, opening with a group show featuring over 70 artists in October of 2006. Strychnin Gallery opened a third location in East London’s vibrant art scene right off of Brick Lane in October 2007. The gallery participates in major international art fairs on a regular basis, including Bridge Art Fair, Liste, or Art21 in Cologne, which appointed gallery owner Yasha Young to its selection committee in 2008.

You can edit or delete your press release Honeytrap. An all female group exhibition at Strychnin Gallery here