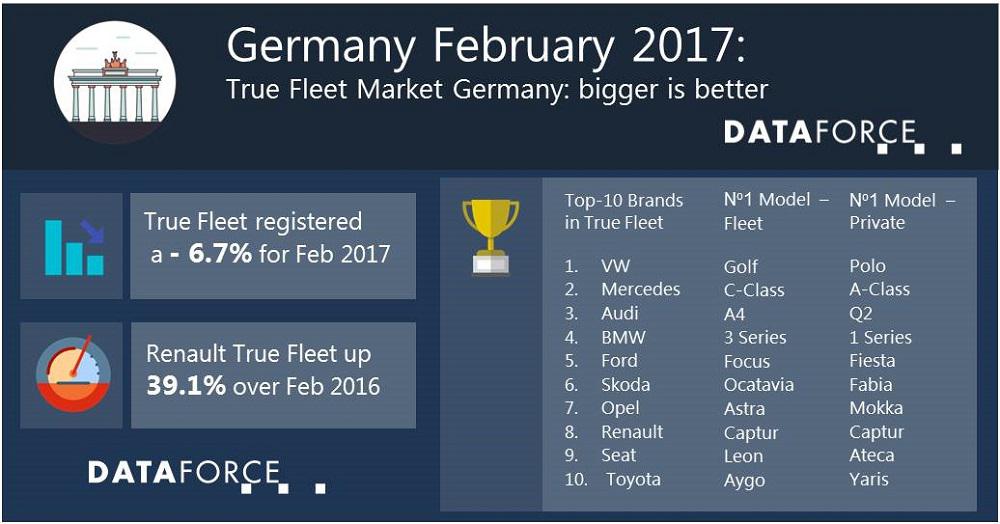 With a drop of - 6.7 per cent compared to February 2016 the True Fleet Market in Germany had a difficult second month of the year. Even if you take into account that February 2017 had one working day less than last year the result was still negative. The Total Market was also slightly negative down to a little over 243,000 registrations generating a -2.6% over its comparable figures for February 2016Market leader Volkswagen lost almost two percent of its market share. Nevertheless some of their models performed very well. Especially the new Tiguan produced a growth of + 30.6% and its highest amount of fleet registrations in a February ever. Volkswagen’s Compact SUV is clearly leading its segment with a share of 12.4% (year-to-date February) followed by Audi Q5 (7.6%) and Mercedes GLC (6.4%). And there is even more to come with the stretched, optional seven-seater Tiguan Allspace which debuted a few days ago at Geneva Motorshow and will enter the markets in the second half of 2017.Mercedes jumped from rank number four overall into second position but the lead over Audi was really small with no more than 18 registrations separating the two. Behind BMW, Ford, Skoda and Opel the Top-10 were completed by three brands with very positive results for February: Renault (+39.1%), Seat (+22.5%) and Toyota (+23.3%). With 2.3% the Japanese brand scored its highest market share since September 2009. Especially the all new C-HR was pushing Toyota’s fleet volume. At SEAT the situation is similar with the new SUV Ateca already ranking second in the Spanish manufacturer’s True Fleet line-up.In general it’s really interesting to have a closer look at the most preferred models both for Private and for Fleet customers. It proves true again that most company car drivers prefer a higher vehicle segment as you can see at VW (Golf instead of Polo), Mercedes (C-Class/A-Class) or BMW (3 Series/1 Series). Within the model range of Audi and Seat most Private customers opt for an SUV (Q2, Ateca) instead of a more traditional Compact or Middle Class Car. At Renault obviously both customer groups agree on their personal number one (Captur).DATAFORCE – Focus on FleetsDataforce is the lading provider of fleet market data and automotive intelligence solutions in Europe. In addition, the company also provides detailed information on sales opportunities for the automotive industry, together with a wide portfolio of information based on primary market research and consulting services. The company is based in Frankfurt, Germany.Contact: Michael GergenDataforce Verlagsgesellschaft für Business Informationen mbH Hamburger Allee 14 60486 Frankfurt am MainPhone: +49 69 95930-231 Fax: +49 69 95930-333 Email: michael.gergen@dataforce.de www.dataforce.de

You can edit or delete your press release True Fleet Market Germany: bigger is better here

02-06-2018 | Leisure, Entertainment, Miscel …
Vandal's Landscaping
Vandal’s Landscaping Announces Their February Freeze
Often people that live in Winnipeg equate January as the coldest month of the year. With an average daily temperature of -16 degrees Celsius, it is. However, February has an average daily temperature of -14 degrees Celsius. The coldest of these days typically happen either just before or during the annual Festival Du Voyageur around Valentine's day. After already experiencing a bitterly cold January in 2018 and an extreme cold warning
09-15-2017 | Leisure, Entertainment, Miscel …
LINKIN Reps Pvt Ltd
The Residence Bintan opens February 2018
September, 2018: Having established hugely successful properties in the Indian Ocean and North Africa, 2018, will see the Cenizaro group make their first foray into Indonesia with an exciting new opening in Bintan. Located on the east coast of Bintan Island, a short boat-ride from Singapore, The Residence Bintan will open in Winter 2018 amongst lush tropical greenery and breath-taking views of the South China Sea. The hotel will be
01-27-2011 | Arts & Culture
Liberty States Fiction Writers
Liberty States Fiction Writers February Blog Tour
Liberty States Fiction Writers is pleased to announce their February Blog Tour: Meet the Authors in conjunction with the 2nd Annual Create Something Magical Conference. Starting February 1st, Liberty States Fiction Writers will introduce the authors signing at the writer’s conference Book Fair (March 19th, 2011) on their blog: http://www.libertystatesfictionwriters.com/blog-read-around-the-world/ . Post comments for your favorite author, connect with other readers and writers! First week’s guest authors include: February 1st - Undead
02-25-2009 | Business, Economy, Finances, B …
BBB of Eastern North Carolina
BBB Consumer Alerts for February 2009
BBB Warns of Garner-based Web Retailer Online Weight-Loss Company Highlighted in February Consumer Alerts RALEIGH, N.C. (February 19, 2009) - The Better Business Bureau (BBB) of Eastern North Carolina (www.bbb.org) warns consumers to be cautious when dealing with companies offering free trials, especially when a credit or debit card is used to cover shipping and handling costs. Complaints are being filed regarding the deceptive practices of an online company with a post
02-06-2008 | Arts & Culture
Kaululehua Hawaiian Cultural Center
Kaululehua Hawaiian Cultural Center: February 2008 Classes
The Kaululehua Hawaiian Cultural Center in South San Francisco is pleased to announce a new weekly class: HULA FOR NEW MOMS AND MOMS-TO-BE every Friday at 9:00am. Our first class will begin on Friday, February 8, 2008 and will include basic hula movements, Hawaiian poetry and history. This is a great opportunity for moms and our “newest hula dancers” to get active in a fun and nurturing family
02-04-2008 | IT, New Media & Software
Secura GmbH
Landrush of asia-domains begins February 20
The Sunrise Period of asia-domains has closed at 2008 January 31. Individual companies and the general public will soon be eligible to register for available asia-domains when the Landrush phase kicks off on February 20, 2008. Landrush concludes on March 12, with Go Live scheduled for March 26, 2008. During the Landrush phase anyone around the world can apply for any available asia-domains, representing a golden opportunity for individuals looking to
Comments about openPR
Your portal is fast, simple, and easy to use. Others may have more functions but they also demand more editing time, you have to preformat the text in order to achieve a good result etc. I think openPR is really fantastic!
Andreas Knepper, wallmedien AG