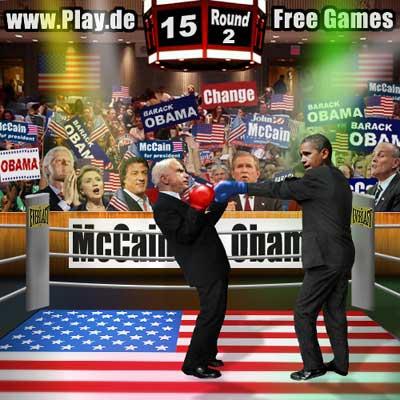 The 2008 US-elections brought up one of the greatest battles for the White House. The democrates bringing up the charismatic senator Barack Obama from Illinois, the republicans their spearhead senator John McCain from Arizona. The difference between these two men could not be bigger. In the red corner we have the young 46 year young harvard-graduate fighting to end the war in Irak and in the blue corner the purple hearted 71 years old vietnam veteran. Who will win the fight? Who will be the next president of the USA? Now you have the chance to find out yourself. Get in the ring and help either Barack Obama or John McCain to win the fight. PLAY.de brings the fight onto your PC. In this brand-new online-game the players select their candidate - Barack Obama or John McCain - to fight against the other. The opponent could be either a friend or the pc. In this game both sides have the same chance to win the fight. Only the players skills make the difference for their candidate. Even if Barack Obama is younger and has an advantage of being taller, you should not rule out the tough John McCain with his experience as a former boxer and vietnam veteran. You can play the game on http://www.play.de, one of the leading free-games-sites in Europe. For international players - especially americans - a localized english version is offered. Find the US-version of the game here: http://obama.play.de/us Game Group GmbH Kaiser-Friedrich-Ring 11 40545 Düsseldorf Presscontact: Stephan Widera Tel. 49 211-61019649 http://obama.play.de/us http://www.play.de/ The game was developed by Gamegroup. Gamegroup develops casual games and advertising games for top-tear companies like t-online, vodafone, volkswagen and more and offers own platforms like play.de, gamers-paradise.com, games6.de as well as mobile portals. Webmasters who need online games for their portals can use Gamegroups special webmaster-service, to get free games-content, on www.games-arcade.de.

09-18-2008 | Politics, Law & Society
Game Group
Obama vs. McCain - the ring-fight
Play.de presents the presidential boxing-game. According to polls the presidential race between Barack Obama and John McCain is nearly even. Who will win the fight and be the next president of the USA? In a free online-game at Play.de users have the chance to find out themselves. They can hop into the ring, choose their side and knock the opponent out. The decision of the race for the White House is

02-24-2017 | Arts & Culture
IMAGE UNLIMITED COMMUNICATIONS
The Legacy of Barack Obama
No matter the political party, Barack Obama’s two-term presidency is one made up of milestone accomplishments and controversies. On Wednesday, March 8th 2017 from 6:00PM – 8:00PM Boston Center for Adult Education (BCAE), Boston’s award-winning adult education center, is dedicating an entire evening to the 44th President with Barack Obama’s Legacy: A Public Conversation. Massachusetts State Senator, Sonia Chang-Diaz, Civil Rights Commissioner, Charlotte Golar Richie, and Lawyer, Architect, and Social
03-16-2011 | Politics, Law & Society
SGS Consumer Testing Services
Obama Signs Healthy Hunger-Free Kids Act
The Healthy Hunger-Free Kids Act was signed into law in the United States by President Obama in December 2010. Designed to improve nutrition in school and reduce rates of childhood obesity, the law increases access to food for the children of low income families in a country where 30 million children receive food through the school lunch program, 17 million children live in food insecure households and one in three
12-15-2010 | Politics, Law & Society
Meet Gay Professionals.com
Obama Ignores Gays and Lesbians In Tax Debate
On average, gays and lesbians earn more than the majority of Americans. They enjoy more disposable income as a result of higher wages and fewer expenses. However, gay and lesbian professionals suffer from discriminatory tax policies that have been in place for decades, and during the current tax debate these issues have once again been ignored. President Obama and Senate Republicans have reached a deal on the extension of tax breaks
02-01-2010 | Business, Economy, Finances, B …
Investment24
Obama and Loan Defaults: the Tremor of Banks
Investment24 Research predicts a difficult year for bank stocks Baech (Switzerland) January 29, 2010 – The recent tumble on the stock markets showed arrestingly that the rally of the last months has stopped for now. In fact, positive news as the increased global outlook of the International Monetary Fund (IMF) stabilized quotes at the beginning of this trading week. However, the charts of the stock indices continue to show weakness. Detached from general
10-16-2008 | Politics, Law & Society
cmp corporate media publishing
Cologne resident sings for Obama
The Cologne singer Carpe’s devotion to the American presidential candidate Barack Obama is most probably unique. Excited by the African-American, Democratic campaigner’s charisma and plans for reform, Carpe went into a studio and created his own hymn to the contender: “Long Live Obama!“ The song is dedicated to Barack Obama’s achievements thus far, that he may win the election on November 4 and fulfill his plans for positive change. Not
09-18-2008 | Politics, Law & Society
Game Group
Obama vs. McCain - the ring-fight
Play.de presents the presidential boxing-game. According to polls the presidential race between Barack Obama and John McCain is nearly even. Who will win the fight and be the next president of the USA? In a free online-game at Play.de users have the chance to find out themselves. They can hop into the ring, choose their side and knock the opponent out. The decision of the race for the White House is
Comments about openPR
9 o'clock: discuss press release with client, 10 o'clock: submit release to openPR, within the briefest possible time release is published and displayed in a prominent place on openPR.de. I am thrilled!
Zehra Spindler, Calypso Now! - Communication Agency