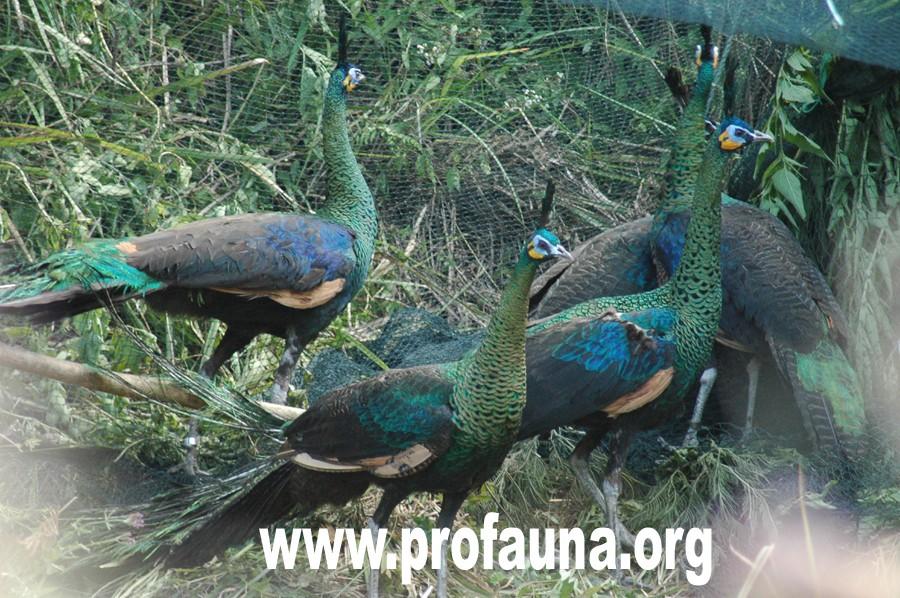 ProFauna Indonesia and the International Fund for Animal Welfare (IFAW) are working to release 17 confiscated green peafowls (Pavo muticus muticus) to the Bromo Tengger Semeru National Park in East Java, on the 4th of June 2008. The release is supported by the Natural Resources Conservation Unit (BKSDA) of the East Java Forestry Department, the authority in charge of the wildlife, and the National Park. Green peafowls have beautiful plumage and are much sought after by traders and collectors. The confiscated green peafowls have been looked after at ProFauna’s wildlife rescue center for four months. Previously the birds were under the custody of a wildlife rescue centre in Yogyakarta, Central Java. They were sent to ProFauna’s wildlife rescue center in order to be released into the wild.The magnificent birds were seized from some animal markets and residences in Java by the forestry authorities. Peafowl are protected birds and often illegally sold for IDR 200,000 or about US$ 22 in the animal markets in Ngawi, East Java, Pramuka market in Jakarta.ProFauna Indonesia’s chairman, Rosek Nursahid said, “The best home for wildlife is in the wild. Giving wildlife, including the peafowls, their freedom back is ProFauna’s first priority”.The green peafowls are to be released in Bromo Tengger Semeru National Park because it used to be the natural habitat of the green peafowls’ in the 1970’s and the species are now facing local extinction in the area. It is hoped that the green peafowls reintroduction would enrich biodiversity in the national park.Editor’s notes: • For further information, please contact Butet A. Sitohang, International Communication Officer, mobile: +6281333899741 or email: international@profauna.orgProFauna Indonesia Jl. Raya Candi II/ 179 Malang 65146 East Java - Indonesia phone: +6281333899741 fax: +62341569506ProFauna Indonesia ( www.profauna.org ) is a wildlife protection organization in Indonesia, established in 1994. ProFauna becomes the largest wildlife protection organization in Indonesia with 500,000 members and supporters.

10-29-2018 | Fashion, Lifestyle, Trends
The Tech Reps
National Smart Home Day
National Smart Home Day Event Press Release National Smart Home Info@NationalSmartHome.org For Immediate Release: National Smart Home Plans National Smart Home Day to help educate and bring awareness to homeowners for smart home living National Smart Home will hold National Smart Home Day on Saturday November 3rd for manufacturers suppliers, dealers and homeowners. The event, which will be held at Rayva Home theaters showroom in Valhalla NY and streamed live across the
09-09-2016 | Leisure, Entertainment, Miscel …
Phatmagic
NATIONAL AWARD
From Abracadabra to alakazam magician inline for National award Midlands, Sept. 7. 2016 - A MAGICIAN who has fought back from depression could be in line to win a national award. Eddie Young, who runs PhatMagic, has been nominated for a Kallikids award The 42-year-old, from Branston, set up Phat Magic more than four years ago after his wife, Debbie, bought him a magic set to 'give him something to do' while
10-17-2014 | Health & Medicine
Relaxa UK
National Stress Awareness Day
National Stress Awareness Day is on Wednesday 5th November 2014. Relaxa is offering employee stress & wellbeing health promotion packages starting at £255 on or around this date - incorporating a range of stress & wellbeing activities for your staff. There are 9 cost-effective stress and wellbeing promotion packages available below: 1) Stress Health Promotion Package 1 - £255.00+vat 2) Stress Health Promotion Package 2 - £399.00+vat 3) Stress Health Promotion Package 3
04-16-2012 | Business, Economy, Finances, B …
The AGRICOM Project
AGRICOM National Workshops Started
Partners from the European AGRICOM project have carried out national workshops in Germany and Greece on February 14th and 15th 2012, respectively. These national workshops, along with the upcoming national workshop in Italy and the Netherlands, support one of the key initial steps of the AGRICOM project, namely the execution of a detailed needs analysis in the agricultural sectors of the partner countries regarding vocational educational training (VET) and competence
02-02-2012 | Business, Economy, Finances, B …
The National Trust bucks economic trends to have bumper December
The National Trust
The National Trust has reported a substantial increase in its visitor numbers, and retail and catering sales in December 2011 compared to the previous December, despite a backdrop of challenging economic times and lack of consumer confidence. There were more than half-a-million (521,000) visitors to Trust properties in December 2011, an increase of 74 per cent on the previous year*. Factors affecting the large jump in visitor numbers include the mild
03-23-2011 | Associations & Organizations
AllAboutCareer
National Employability Campaign Begins
Graduates are increasingly unlikely to find themselves with a place on a graduate scheme as the number of student graduating vastly outstrips the number of places available. Despite an expected increase in the number of graduate vacancies in 2011 by 3.8% the number of vacancies offered according to the Association of Graduate Recruiters will still be less than 21,000. The AllAboutCareers.com National Employability Campaign, which is aimed at all undergraduates, hopes
Comments about openPR
9 o'clock: discuss press release with client, 10 o'clock: submit release to openPR, within the briefest possible time release is published and displayed in a prominent place on openPR.de. I am thrilled!
Zehra Spindler, Calypso Now! - Communication Agency