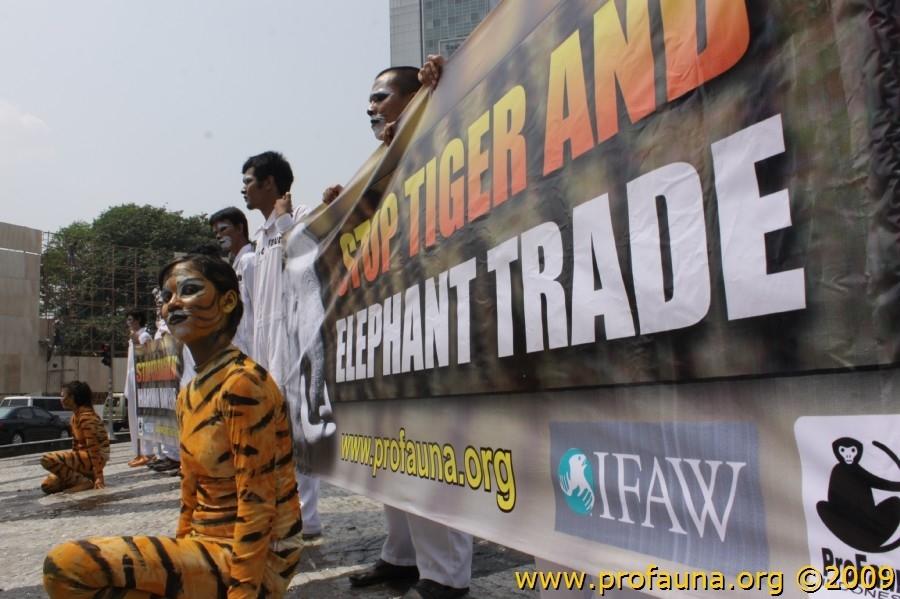 The illegal trade of tiger and elephant parts is still flourishing. The rampant trade is revealed in an investigation report launched by ProFauna Indonesia which is supported by the International Fund for Animal Welfare (IFAW). The four month investigation, carried out from July to October 2008, ProFauna visited 21 regions in Sumatera and Jakarta and investigated into the trade.Elephants and tigers face extinction due to poaching to meet the growing demand for wildlife. The investigation confirms that this region is a hotspot for illegal wildlife trade with almost 100 per cent of traded animals being caught from the wild,” IFAW Asia Pacific Wildlife Trade Campaigner, Jorge Basave, said.The findings showed that among the 21 regions, the locations which sold either tiger or elephant parts were found in ten regions (48%). The locations for tiger trade only were found in six regions (28%) and the locations for elephant parts only were found in five regions (24%). The report also shows that the lucrative parts of elephant are a whole ivory tusk or cigarette pipe made from it. While the tiger parts which are most sought after are skin, whisker, claw, fang, and a whole stuffed tiger. Most of these endangered animal parts are sold in art shops, gemstone and traditional medicine vendors. The highest level of tiger parts trade was in Lampung province, Sumatera, while elephant parts are sold the most in Western Sumatera.The prices of these illegal parts are varied from hundred thousand to half a billion Indonesian Rupiah or from dozens to 50 thousand USD. For examples, a cigarette pipe made from ivory tusk costs from 15 to 250 USD, while 40 kg whole ivory tusk cost 50,000 USD. A tiger fang costs 40 to 110 USD. Tiger skin could fetch to 1,000 USD a piece. We can imagine the price of a whole stuffed tiger. ProFauna has reported the investigation findings to the Forestry Department in April 2009 while encouraging the government to take more action to strictly curb the illegal trade of the endangered species. ProFauna applauds government enforcement in Jakarta to tackle the trade of tiger parts in Jakarta. On 7 August 2009, the Forestry Department Rangers and the Jakarta Police Department raided a tiger skin syndicate in Jakarta. The team has successfully confiscated two whole tiger skins, six stuffed birds of paradise, two whole leopard cat skins, 12 stuffed deer heads, a surili, five deer skulls, a bear head, and a deer skin. This syndicate is alleged to involve the officials of the zoos in Java and Sumatera.The raid in Jakarta has proven that ProFauna’s report revealing the illegal trade of tiger and elephant parts are factual and must be taken seriously. This is only the tip of the iceberg, there are more endangered animals killed out there to supply the black market.According to the 1990 Wildlife Act concerning the Conservation of the Natural Resources and Ecosystem, “Every one is prohibited to trade, keep, own, export (inside and outside Indonesia) the skin, body or other parts, by-products of a protected animals.” Offenders are liable to a maximum five year prison term and 100 millions IDR (10,000 USD).ProFauna Campaign Officer, Radius Nursidi stated, “ProFauna appreciates the raid by the Police. But seizures such as that in Jakarta should be conducted in Sumatera as the hub of the illegal wildlife crime. The law must be enforced and this should not go unpunished". ProFauna records show that the illegal trade of tiger and elephant parts still happens in the cities of Sumatera, like Palembang, Lampung, Jambi, and Bengkulu. The government must curb this; otherwise the endangered species will be extinct in the wild.ProFauna Indonesia (www.profauna.org) is a wildlife protection organization in Indonesia established since 1994. With the help of it volunteers all over Indonesia, ProFauna works through campaigns, education, trade survey, and wildlife rescue.ProFauna Indonesia Jl. Raya Candi II/ 179 Malang 65146 Jawa Timur - Indonesia Contact Person: Butet A. Sitohang International Communication Officer email: international@profauna.org mobile: +6281333899741

10-22-2009 | Energy & Environment
ProFauna Indonesia
WIldlife Trade in Java is Still High
WILDLIFE TRADE IN BIRD MARKETS IN JAVA IS STILL HIGH The illegal wildlife trade in bird markets in Java Island, Indonesia, is still high. From the latest survey conducted by ProFauna Indonesia with support by the World Animal Net (WAN) in 70 bird markets in the most developed and dense island in the country from May to July 2009. ProFauna recorded that there were 183 animals of 25 species traded openly
09-19-2009 | Energy & Environment
ProFauna Indonesia
International Concern over Alleged Illegal Zoo Trade in Indonesia
International wildlife charity the Born Free Foundation has joined ProFauna Indonesia in calling for a full investigation into allegations of illegal trading of wildlife products by several prominent zoos in the country. The case of the confiscation operation on the protected animal parts in Jagakarsa, Jakarta (7 August 2009) has been developed by the authorities. The Forestry Department held the second case presentation on 10 September 2009. The government agency strongly
09-04-2009 | Energy & Environment
ProFauna Indonesia
ProFauna Calls for Indonesian Government Action to Fully Enforce the Wildlife La …
The illegal trade of wildlife parts is more rampant. ProFauna Indonesia, a wildlife protection organization, records that there have been three tigers killed in zoos in Indonesia for the past four months. It seems that there is no more ‘safe place’ for the endangered Sumateran tigers. In the wild, tigers are still being hunted for trade while in zoos; tigers are still threatened as well by the illegal wildlife syndicates. The
04-27-2009 | Energy & Environment
ProFauna Indonesia
ProFauna Calls for Indonesian Government’s Action to Stop Elephant and Tiger P …
Elephant and Tiger poaching in Sumatera get more rampant. ProFauna Indonesia, a wildlife protection organization in Indonesia, records the recent deaths of two female elephants named Gia and Paula in the Center of Elephant Conservation (PKG) in Seblat, Bengkulu, and Sumatera on 23rd March 2009. The two mammals died after being shot in their heads. Ironically, in Gia’s head was found a bullet which damaged her brain and caused