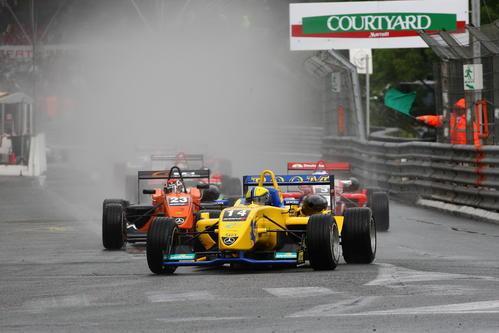 Place: Pau (France) Dates: 30th May - 1st June 2008 Track length: 2.76km Results: 7th in the first race, 9th in the secondWhat a chase through the narrow streets of Pau! Starting from 27th on the grid, Michael Klein battled his way up to seventh place in the first of the weekend's two races. The F3 classic in Pau is just like its big brother in Monaco in many respects: you have to drive a faultless race through the forest of crash barriers, keep your concentration throughout and not allow yourself to be lured into errors - Michael did precisely that and garnered his first Euro Series points.Michael Klein talking about...... Pau: "Right from the first free practice, the car felt great and it was tremendously enjoyable driving round the circuit. It's unlike anything I've ever known before - up to now I've had no experience of racing through such narrow built-up streets."... the first race: "From 27th up to seventh: I hadn't expected that before the start. I went into the race thinking: "Let's wait and see what happens." Because I knew there would be plenty of people dropping out. My main priority was to ensure that I got the car safely over the finishing line. So I followed a policy of 'Safety First', avoided making any errors and worked my way up to seventh. It was a fun race and we also showed off our speed."... the second race: "I don't think I've ever had such a good night's sleep as I did before the second race. Starting from the front row is quite an achievement in itself. Once again, our speed was good and I felt OK with the car. I knew from the off that, if it stayed dry, I would be one of the fastest. Unfortunately, I had a bit of bad luck plus I made a minor error. That was a pity, but overall we need to focus on the fact that this was another solid performance."... the lessons learned from the weekend: I notched up my first points in the F3 Euro Series and showed that I could compete with the front-runners, which is a very positive basis on which to build for the next street circuit in Nuremberg. That's another track I haven't driven on yet, but I have to say that the street circuit in Pau suited me fine. I'm hoping that will be true of the next one on the calendar. In any case, I'm feeling very optimistic about our chances at the Norisring."Press Contact: Stephan Heublein Tel: +49 (0)89 500 948 84 Email: redaktion@adrivo.com adrivo Sportpresse GmbH Liebenauer Hauptstrasse 106/6 A-8041 Graz Tel: +43 (0)316 915 252 Fax: +43 (0)316 915 253 Email: info@adrivo.com www.adrivosportpresse.comAbout adrivo Sportpresse GmbH: adrivo Sportpresse GmbH publishes at www.adrivo.com one of the most popular motorsports online magazines. The website reaches a core fan base in Germany, Austria and Switzerland. It captures all the magic and glamour of motor racing, bringing its visitors compelling reports from all the different championships. The company also runs the official websites of Michael Schumacher and Formula One star Nick Heidfeld as well as working in close cooperation with some of the major figures in international motor racing. Furthermore, adrivo Sportpresse GmbH provides and distributes high quality editorial motorsport content. The flexible and customizable content portfolio is available in up to 10 languages. The clients include relevant on- and offline media like Spiegel, AutoBild, T-Online, Lycos, etc. as well as companies that sponsor motorsports like DHL, Bridgestone, Dunlop, Aral and many more. Through adrivo.com and our client’s adrivo media network we reach around 4,5 million motor racing fans each month. Our content has become very influential and an opinion maker in Germany, Austria and Switzerland!

You can edit or delete your press release Michael Klein: Notching up the first points here