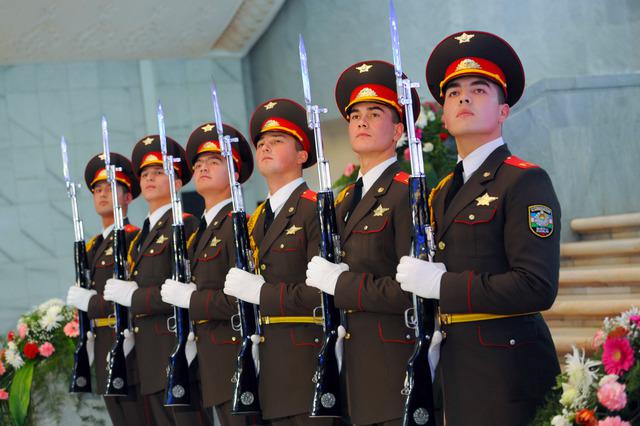 02-22-2017 | Politics, Law & Society
The Embassy of the Republic of Uzbekistan in Germany
Uzbek judiciary to undergo improvement
President Shavkat Mirziyoyev signed on February 21 the Decree ‘On Measures for Fundamental Structure Development and Efficiency Increase of the Judicial System of the Republic of Uzbekistan.’ Upholding judicial democratisation and independence in securing human rights and interests, the Action Strategy 2017-2021 identifies access to justice, judicial efficiency and higher standards for justice hopefuls as the kernel of judicial reforms. The Decree, which is an important step for state policy in this
02-22-2017 | Business, Economy, Finances, B …
The Embassy of the Republic of Uzbekistan in Germany
Uzbekistan Railways carries 68 million tons of cargo in 2016
The National press center of Uzbekistan held a press-conference devoted to the results of social-economic activity of JSC Uzbekiston Temir Yullari in 2016 and the development plans for 2017. The event brought together the representatives of governing joint-stock companies, organizations and enterprises of the industry, heads of relevant departments and media representatives. In the reporting period, Uzbekiston Temir Yullari has fulfilled all its main tasks in the railway sector. In particular,
01-19-2017 | Business, Economy, Finances, B …
The Embassy of the Republic of Uzbekistan in Germany
Uzagroexport Company has scheduled exporting more than 1.27 million tons of frui …
This year, Uzbekistan will continue scaling up exports of fresh and processed fruit and vegetable products. According to experts, the implementation of specific measures and programs on expansion of fruit and vegetable production, as adopted late last year, will ensure the further growth of deliveries to neighboring countries, the CIS, Europe and Asia, and provide access to new markets. In 2016, Uzbekistan adopted more than a dozen legal acts to increase
01-19-2017 | Politics, Law & Society
The Embassy of the Republic of Uzbekistan in Germany
The Government of Uzbekistan sums up results for 2016 and determines yearly prio …
On 14 January an extended session of the Cabinet of Ministers, dedicated to comprehensive analysis of the results of social-economic development of the country in 2016 and determining the most important directions and priorities of economic and social program of the government in 2017 was held in Tashkent. The chairmen of the Legislative Chamber and the Senate of the Oliy Majlis, state advisors of the President of the Republic of

05-17-2021 | Energy & Environment
Williston Force Portable AC
Williston Force Portable AC Review
This is a Williston Force Portable AC Reviews. Ah, the joys of summer, long afternoons laying out at the beach, sunset barbeques and of course, baseball. But many of us can stand the heat for only so long. Working, exercising and even sleeping in these hot regions would be extremely uncomfortable and downright dangerous for some people without air conditioning. Air conditioning has changed the way we live and work. It has
04-18-2019 | Industry, Real Estate & Constr …
Market Density
Global Force Sensors Market Research Report
This report studies the global Force Sensors market status and forecast, categorizes the global Force Sensors market size (value & volume) by manufacturers, type, application, and region. This report focuses on the top manufacturers in United States, Europe, China, Japan, South Korea and Taiwan and other regions. Get sample copy of the report: https://www.marketdensity.com/contact?ref=Sample&reportid=68785 Table of Contents: Table of Contents Global Force Sensors Market Research Report 2018 1 Force Sensors Market Overview 1.1
02-08-2019 | Industry, Real Estate & Constr …
Elesa UK
Heavy Duty clamping – effective force from Elesa
The Elesa range of heavy duty manual latch and toggle clamps in the MTP and MPB series are supplemented with their PPC pneumatic drive units for push-button or automated operation. A particular feature of Elesa heavy duty clamps is their in-built adaptability to suit work-holding, jig closure etc. by virtue of their adjustment and/or weldability for integration into workstation equipment. An aspect greatly facilitated by their ease of disassembly/rebuild which
07-10-2017 | Media & Telecommunications
Global Market Insights Inc.
Force Sensors Market - Global Forecast to 2024
Force Sensors Market size shall witness a healthy growth in forecast period with application in aerospace, defence, printing, packaging, robotics and automotive industry. Its usage has increased for advanced electronic control systems as the product improve response time and efficiency of machines. Additionally, this has ultra-thin construction (thickness less than 0.5mm) that provides flexibility and minimizes interference and disturbance to normal action. These factors are expected to propel force sensors
01-28-2012 | Associations & Organizations
Polycoat Products
POLYCOAT EXPANDS ITS SALES FORCE
Welcomes Adriaan van der Capellen and Steven McGrane Plus Eighteen Independent, North American Sales Reps Santa Fe Springs, CA – January 24, 2012 - American Polymers Corporation (dba Polycoat Products), a leading manufacturer and custom formulator of high performance protective polyurethanes, polyurea, and polyaspartic coatings and linings welcomes two new important additions to its California sales staff plus eighteen independent, North American sales reps tasked with expanding sales throughout the
10-26-2011 | IT, New Media & Software
Prime Force Group
Prime Force Denmark commences operations
On October 10, 2011 Prime Force Denmark was founded. With this, Prime Force expands for the first time beyond German-speaking countries. The new office was set up in Copenhagen – Scandinavia’s second largest city is at the same time the heart of Denmark’s economy. The Danish speed and straightforwardness regarding the company foundation pleasantly surprised Christian Gröger, the Swiss CEO of Prime Force. He had come from Zurich to support the
Comments about openPR
Your portal is fast, simple, and easy to use. Others may have more functions but they also demand more editing time, you have to preformat the text in order to achieve a good result etc. I think openPR is really fantastic!
Andreas Knepper, wallmedien AG