Aamir Khan Issues A Statement In Favour Of Zaira Wasim 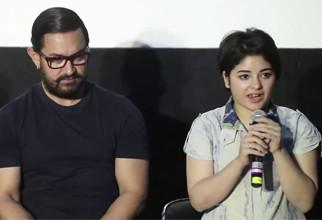 Her precocious acting set upon a benchmark to all the youths as she confidently portrayed the role of young Geeta Phogat in the much applauded Aamir Khan's 'Dangal.' Zaira Wasim needs no more introduction as she had already proved her potential as an actor. The girl recently met Mehbooba Mufti, the Chief Minister of Jammu & Kashmir and was trolled for the same when she posted a photo of hers with the minister.Supporters of Zaira both from the film industry and outside it are coming in support of the actress. Her on-screen father Aamir khan issued a statement regarding the issue. His statement reads-"understand and imagine what lead her to make the statement. Zaira, I want you to know that we are all with you. The beauty is that bright, young, talented hardworking, respectful, caring and courageous kids like you are a role model for kids not only in India, but across the world. You certainly are a role model for me! May god bless you. Love. Aamir. P.S.: I appeal to everyone to now leave her alone and respect the fact that she is just a 16 yr old girl trying her best to deal with life."Meanwhile Zaira's apology letter on her Facebook wall reads, "This is an open confession/apology. I know that many people have been offended and displeased by my recent actions or by the people I have recently met. I want to apologise to all those people who I've unintentionally hurt and want them to know that I understand their sentiments, especially considering what has happened (in Kashmir) over the past six months. I hope people can also understand there are certain circumstances that emerge which one cannot control. I hope people still remember that I'm a just a 16-year-old girl and treat me accordingly. I'm sorry for what I did, but it was not a deliberate decision and I really hope people can forgive me. I am being projected as a role model for Kashmiri youth. I want to make it very clear that I do not want anyone to follow in my foot steps or even consider me a role model. I'm not proud of what I'm doing and I want everyone, especially the youth to know that there are real role models out there whether they be in this time or in our history. To even consider me as a role model would be disgracing them and their disgrace would be OUR DISGRACE! I do not wish to start an argument here, this was a just a mere confession from my end which I really wanted people to know. May Allah bless us and guide us."A leading daily quoted Zaira's second post after she deleted the apology note. The second post reads, "Regarding my last post, I have no idea why this has become such a big issue. I just wanted to make sure that I did not hurt anyone's feelings and all of a sudden it has turned into national news. Again and again, I am telling people that I have not been forced into anything by anyone. This was post was not meant against anyone, just wanted to make sure that people were not hurt by what I was doing. From media to everyone else, please don't blow this out of proportion. Neither was I forced (to apologise) nor am I against anyone. Hopefully this post just stops this once and for all."#G-1, New Udyog Mandir 2 Moghul Lane, Mahim (W) Mumbai 400016 India#G-1, New Udyog Mandir 2 Moghul Lane, Mahim (W)

03-23-2018 | Science & Education
Goldmine Adv ltd
Quantum Sports Meet 'Udaan 2018' gives wings to a thousand students!
More than 800 students from Uttarakhand and neighbouring states competed in the two-day annual Sports Meet organised by Quantum University, titled 'Udaan 2018'. The enthusiastic students participated in the competitions such as basketball, volleyball, tug of war, football, badminton, long jump. Several indoor games were also organised by the University in which the students showed their keen interest. Highlighting the importance of sports in a student's life, Secretary of the University,
01-05-2017 | Leisure, Entertainment, Miscel …
FridayMoviez
'Dangal' Sets A New Benchmark By Earning Rs. 584.70 Cr Worldwide
Ever since Aamir Khan starrer 'Dangal' has released it is winning accolades not only for the stellar performances by the artists but also for its outstanding storyline and direction. The film is pocketing a huge amount of collection from the domestic market as well as International market. While everyone was waiting for the film to break all the record of Salman Khan's highest grosser 'Sultan' 'Dangal' seems to set upon
12-27-2016 | Leisure, Entertainment, Miscel …
FridayMoviez
Box-Office Collection Of 'Dangal'
As the year is heading towards its end, it has bought along festive cheers and happiness. Aamir Khan's much awaited film 'Dangal' released just wo days prior to Christmas and made a good box office collection as well. After witnessing the screening of the film by most of the B-town celebrities it was now time for the audience to witness it. The film collected Rs. 29.78 crores on its opening
12-19-2016 | Leisure, Entertainment, Miscel …
FridayMoviez
Aamir Khan Sings After 18 Years For 'Dangal'
Remember Aamir Khan singing 'Aati Kya Khandala' song with Rani Mukerji in the film 'Ghulam.' Well it had been 18 long years then, that Aamir has not crooned any song for his films. Now he is back to singing and that too as a rapper with his version of the 'Dhaakad' song from the film 'Dangal.' This is the second version of the song while the earlier is already crooned
11-30-2016 | Media & Telecommunications
FridayMoviez
Aamir Khan's Inspirational Weight Loss Journey For 'Dangal'
Aamir Khan is popularly known as the 'Mr. Perfectionist' of Bollywood and he doesn't miss a single chance to prove that he owns this title. Unlike many stars he does only one film in a year but with full dedication. There are many such qualities which differ him from all the other actors in the industry. Aamir will be next seen in Nitesh Tiwari's 'Dangal' and will essay the character of
11-17-2016 | IT, New Media & Software
Enterprise Monkey
Garage tech start-up in race for Young Business Leader award
"Aamir has been shortlisted as a finalist to win the Young Business Leader of The Year Award category at the Optus My Business Awards 2016." Aamir Qutub CEO, Enterprise Monkey, running to take out one of Australia’s top industry awards has indeed come a long way in less time. He founded Enterprise Monkey in October, 2014 in a garage in Geelong with no initial capital. The web and mobile app development
Comments about openPR
9 o'clock: discuss press release with client, 10 o'clock: submit release to openPR, within the briefest possible time release is published and displayed in a prominent place on openPR.de. I am thrilled!
Zehra Spindler, Calypso Now! - Communication Agency