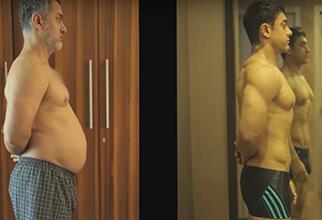 Aamir Khan is popularly known as the 'Mr. Perfectionist' of Bollywood and he doesn't miss a single chance to prove that he owns this title. Unlike many stars he does only one film in a year but with full dedication. There are many such qualities which differ him from all the other actors in the industry.Aamir will be next seen in Nitesh Tiwari's 'Dangal' and will essay the character of Mahavir Phogat, the wrestler father of Geeta Phogat who won the first gold medal for India. Aamir was supposed to portray two looks for the same, one a young wrestler while the other a middle aged father of two daughters.A 5 minute 20 seconds video went viral on the internet titled as 'Fat to Fit' which showed the transformation of Aamir Khan from a heavy weighted 97 Kg man to a fit and fine Aamir flaunting his 6 pack abs. Aamir says in the video that director Nitesh Tiwari asked him to shoot for the young man's portion first but Aamir refused to do so as he said gaining weight is easier but losing it is very difficult and if they shoot for the younger portion first then he will end up putting on more weight and there will be no reason for him to lose it.Aamir also said that he enjoyed gaining weight as he ate almost all the things he loved without keeping any doubts in the mind. He hogged on his favourite ice-creams, samosas, chocolates and more things. In a few months Aamir gained 97 kgs and was looking like an teddy bear and his son found him very soft and cuddly.Finally the 80% portions which needed a bulky Aamir was shot and then it was the time to lose all the excess weight and return to his six-pack abs. This five months journey was so difficult for him because he faced many problems while exercising. He was trained by his fitness trainer Rahul Bhatt and Rakesh Udiyar who planned a strict diet for him with certain type of workout. They made him eat a customised diet plan by renowned dietician Dr Nikhil Dhurandhar on calorific deficit, in which the diet would oscillate from 1,800 Kcal to 2,500 Kcal. They also made him to lift a lot of weights but the actor refused to do so as he found it very heavy and suffered problems while breathing. But after few months he started to notice the change in himself and was happy with the fact that his body is returning into his initial shape.The glow on his face after gaining his six-pack abs is just hard to miss which is inspirational in the other way as it shows the dedication of the actor towards a certain role. And the video comes to an end with a smile on Aamir's face showing him how satisfied he is with his look.Watch the video here.FRIDAYMOVIEZ.COM is a chic movie portal bringing you the best of Bollywood and Hollywood in terms of the up-to-the-minute news, movie reviews and trailers, celebrity images, videos and profiles, exclusive inside information comprising original features, live event coverage, red carpet events, comprehensive archives and more. Positioned to be the unparalleled resource for quality movie infotainment, FRIDAYMOVIEZ.COM delivers the ultimate user experience for all movie enthusiasts worldwide with its cutting edge technology, high definition videos and images and our ‘paparazzi non-compliant’ content which ensures that the news and information we provide is real, relevant and engaging, without being uncouth or offensive.#G-1, New Udyog Mandir 2 Moghul Lane, Mahim (W) Mumbai 400016 India

04-27-2021 | IT, New Media & Software
Enterprise Monkey
Australia's Covid Help App 'Angel Next Door' Launches In India
New Delhi, India: Today, Angel Next Door, Australia's viral COVID-19 community help platform launches in India. This website aims to connect people all over India to help each other during the COVID crisis. Angel Next Door went viral in Australia last year and it helped around 10,000 people within 3 weeks of the launch and received Australian national media coverage and applause from the government. In the rise of
03-23-2018 | Science & Education
Goldmine Adv ltd
Quantum Sports Meet 'Udaan 2018' gives wings to a thousand students!
More than 800 students from Uttarakhand and neighbouring states competed in the two-day annual Sports Meet organised by Quantum University, titled 'Udaan 2018'. The enthusiastic students participated in the competitions such as basketball, volleyball, tug of war, football, badminton, long jump. Several indoor games were also organised by the University in which the students showed their keen interest. Highlighting the importance of sports in a student's life, Secretary of the University,
01-18-2017 | Media & Telecommunications
FridayMoviez
Aamir Khan Issues A Statement In Favour Of Zaira Wasim
Her precocious acting set upon a benchmark to all the youths as she confidently portrayed the role of young Geeta Phogat in the much applauded Aamir Khan's 'Dangal.' Zaira Wasim needs no more introduction as she had already proved her potential as an actor. The girl recently met Mehbooba Mufti, the Chief Minister of Jammu & Kashmir and was trolled for the same when she posted a photo of hers
01-05-2017 | Leisure, Entertainment, Miscel …
FridayMoviez
'Dangal' Sets A New Benchmark By Earning Rs. 584.70 Cr Worldwide
Ever since Aamir Khan starrer 'Dangal' has released it is winning accolades not only for the stellar performances by the artists but also for its outstanding storyline and direction. The film is pocketing a huge amount of collection from the domestic market as well as International market. While everyone was waiting for the film to break all the record of Salman Khan's highest grosser 'Sultan' 'Dangal' seems to set upon
12-19-2016 | Leisure, Entertainment, Miscel …
FridayMoviez
Aamir Khan Sings After 18 Years For 'Dangal'
Remember Aamir Khan singing 'Aati Kya Khandala' song with Rani Mukerji in the film 'Ghulam.' Well it had been 18 long years then, that Aamir has not crooned any song for his films. Now he is back to singing and that too as a rapper with his version of the 'Dhaakad' song from the film 'Dangal.' This is the second version of the song while the earlier is already crooned
11-17-2016 | IT, New Media & Software
Enterprise Monkey
Garage tech start-up in race for Young Business Leader award
"Aamir has been shortlisted as a finalist to win the Young Business Leader of The Year Award category at the Optus My Business Awards 2016." Aamir Qutub CEO, Enterprise Monkey, running to take out one of Australia’s top industry awards has indeed come a long way in less time. He founded Enterprise Monkey in October, 2014 in a garage in Geelong with no initial capital. The web and mobile app development
Comments about openPR
We publish our press releases on openPR.de because we like people who are "open" - just like us.
Frank Obels, CEO, INCONET - Informationssysteme, Communication und Netzwerkberatung GmbH