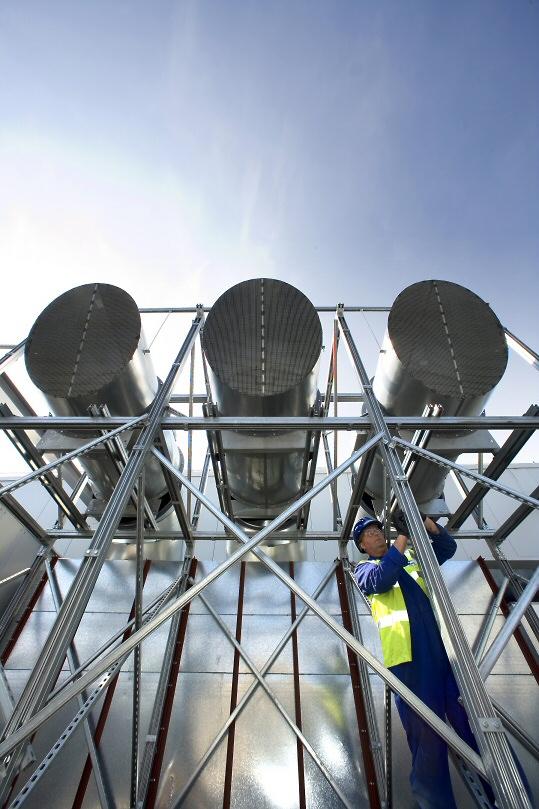 Ductwork at the Echo Arena

The Liverpool construction boom has been a major boost for ductwork specialist, Senior Hargreaves. Just as the arena project on the waterfront nears completion they are poised to win a further ventilation services contract at another landmark city centre construction project. The company also report record breaking business for their Bootle Ductshop trade counter which provides HVAC equipment for contractors engaged in local regeneration projects. The final fit out phase is underway at the Echo Arena and BT Conference and Exhibition complex. The two wings of the development are linked by a central galleria that provides access to all facilities and a pedestrian route to the riverside. Heating and ventilation ductwork installation was completed in time for handover of the arena for the Year of Culture events that began in January. A phased handover of the conference centre and galleria is planned, with total completion in April. Combining a 10,000 seat multi-purpose arena for concerts and sports with a 1,350 seat auditorium and an exhibition space of 7000 square metres the multi-purpose complex presented a number of HVAC challenges. Flexibility for different events and levels of occupancy is a key element in the building services, designed by consultants Faber Maunsell. In turn, this is part of the energy conservation strategy for the building that matches rates of airflow, heating or cooling to the occupancy demand. Hargreaves’ project manager, Wayne Bunnell commented, “With most of the ductwork located the roof space, a complex roof structure and other services are also vying for space, this has been an externally challenging project.” “With so many landmark construction projects, Liverpool is certainly on the up, and it is great that Hargreaves can be involved in the large ductwork contracts like the Arena and also support the smaller projects through the Bootle trade Ductshop,” concluded Phil Johnson, Hargreaves’ director of Ductshops. More Information Phil Johnson, Senior Hargreaves, Tel. 0161 764 5082 Fax. 0161 762 2336 E-mail: pr@senior-hargreaves.co.uk Web: www.hargreaves-ductwork.co.uk Senior Hargreaves, Lord Street, Bury, Lancashire BL9 0RG, UK High/low resolution images are on the web at www.ainsmag.co.uk/ha166/4542ha1a.htm Senior Hargreaves is the UK's largest ductwork manufacturer. They produce over 4,000 tonnes of HVAC ductwork each year for a diverse range of construction applications. The HFD range of fully tested fire resistant ductwork is designed for smoke extract and ventilation in fire engineering projects, where safe evacuation of people is vital.

01-11-2019 | Logistics & Transport
INSOFTDEV
INSOFTDEV at PHTM Expo 2018 -MK Arena
Freshly returned from PHTM Expo 2018 INSOFTDEV (https://www.insoftdev.com) team has some great impressions to share from this event hosted at MK Arena on the 9 th and 10 th of May. In terms of facts and figures at PHTM Expo have been present more than 60 exhibitors : from Data dispatch providers to aggregate platforms, insurance brokers and car dealers. And what was really impressive was actually the number of
09-20-2017 | Sports
Global Industry Report
Global Swimming Goggles Market 2017 - Speedo, Arena, Decathlon, Zoggs, MESUCA, A …
This report mainly introduces volume and value market share by players, by regions, by product type, by consumers and also their price change details. As a Detailed Analysis report, it covers all details inside analysis and opinion in Swimming Goggles industry. This report splits Swimming Goggles market By Functional Classification, By People, By Nose Bridge, By Lens, which covers the history data information from 2012 to 2016 and forecast from 2017
05-03-2017 | Advertising, Media Consulting, …
M-BIZ Global Solutions GmbH
M-BIZ Global Releases Pocket Arena 3.0
The new version of the free social gaming platform service will aid game developers in wider spread distribution of their games. LUCERNE, SWITZERLAND – MAY 2017 – M-BIZ Global releases the latest version of Pocket Arena, a free social gaming service provider for game developers. The new version of Pocket Arena is a free SDK that helps any game into heightened fun and enjoyment because of the high stakes competition, social features,
10-27-2016 | Logistics & Transport
Naval Defence Consulting
China Enters the Autonomous/Drone Shipping Arena
Eyebrows have been raised and shouts of returning to the heady days of the space race have been heard after Naval Defence Consulting released its report on China's lead in the autonomous/drone shipping arena. Naval Defence Consulting’s review identified that way back in 2013 China formed The “Marine Equipment Information Intelligent Management and Application Technology Innovation Centre”. The centre focuses on the core technology development of smart ships. In May 2015
03-05-2012 | Advertising, Media Consulting, …
ProFromGo
Pittsburgh SEO Firm Enters Reputation Management Arena
ProFromGo – a Pittsburgh SEO company – announced that it has officially entered the Online Reputation Management arena. The move comes following a period of significant growth for the internet marketing company that included a 100% increase in the number of client requests for ORM services. ORM is closely related to search engine optimization, the company said on Monday. "The tools that are used to manage the reputations of
05-05-2011 | Health & Medicine
ORGENTEC Diagnostika
Coface Arena: Back Straight Becomes ORGENTEC Stands
The Mainz-based company ORGENTEC Diagnostika has extended its involvement with 1. FSV Mainz 05 and will continue to sponsor stands at the new Coface Arena in Mainz. As they did in the Bruchweg Stadium, the globally active company, which specializes in laboratory tests, will keep the naming rights for the back straight in the new stadium built for FSV Mainz 05 for three years. In addition, ORGENTEC Diagnostika will have a
Comments about openPR
Your portal is fast, simple, and easy to use. Others may have more functions but they also demand more editing time, you have to preformat the text in order to achieve a good result etc. I think openPR is really fantastic!
Andreas Knepper, wallmedien AG