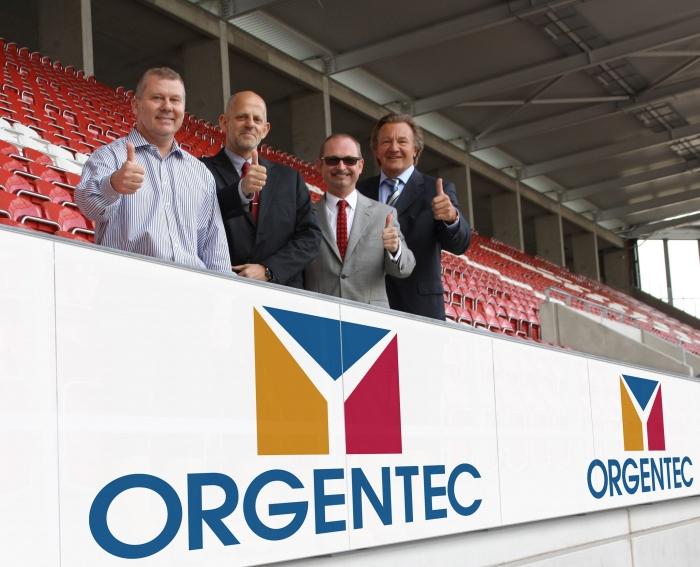 The south stands of Coface Arena in Mainz become the ORGENTEC stands.

The Mainz-based company ORGENTEC Diagnostika has extended its involvement with 1. FSV Mainz 05 and will continue to sponsor stands at the new Coface Arena in Mainz.As they did in the Bruchweg Stadium, the globally active company, which specializes in laboratory tests, will keep the naming rights for the back straight in the new stadium built for FSV Mainz 05 for three years. In addition, ORGENTEC Diagnostika will have a strong presence in the Coface Arena, including two TV banners and two advertising boards directly behind the goals.ORGENTEC has been involved with the German Bundesliga club 1. FSV Mainz 05 since 2006, both as a member of the business club and a co-sponsor. Since 2007, the manufacturer of diagnostic tests has had naming rights to the east stands of the Bruchweg Stadium.“We are proud of our longstanding collaboration and are pleased to continue working side by side with the 05ers in the new stadium as well. As a global player with a presence in over 100 countries, it is nice to be engaged locally and to demonstrate to the region – and especially Mainz 05 and its fans – our clear commitment to Mainz, where we have our headquarters. In Mainz, for Mainz – this has always been our motto,” says Dr. Wigbert Berg, founder and CEO of ORGENTEC Diagnostika GmbH.FSV Mainz 05 is also glad that ORGENTEC will remain loyal to the team as it moves to the new Coface Arena, where the company will continue to sponsor stands: “Mainz 05 and ORGENTEC just fit together. The company has always emphasized its proximity to Mainz and has taken its partnership with the 05ers seriously”, states Dag Heydecker, Marketing Director of Mainz 05.ORGENTEC Diagnostika GmbH is based in Mainz and is a global leader in the development, production, and marketing of test systems for laboratory diagnostics. ORGENTEC Diagnostika has developed over 200 different test systems for autoimmune diagnostics and the diagnosis of infectious disease. Many of these tests are patent-protected. These include methods for the detection and monitoring of diseases such as diabetes, celiac disease, and rheumatoid arthritis.At the company’s headquarters in Mainz, ORGENTEC Diagnostika now employs over 120 people. With its own distribution channels in Germany, Austria, Switzerland, Hungary, and France, as well as an established global distribution network, ORGENTEC Diagnostika’s products and laboratory tests are benefitting patients in over 100 countries around the world. - www.orgentec.comPress contact: ORGENTEC Diagnostika GmbH Tobias Stolzenberg - PR and Communications Manager - Carl-Zeiss-Straße 49-51# 55129 Mainz GERMANYTel. +49 6131 9258-0 Fax +49 6131 9258-0www.orgentec.com orgentec@orgentec.comORGENTEC's media channels: www.autoimmunityblog.wordpress.com www.twitter.com/ORGENTEC www.youtube.com/ORGENTECMainz

You can edit or delete your press release Coface Arena: Back Straight Becomes ORGENTEC Stands here

06-20-2012 | Health & Medicine
ORGENTEC Diagnostika
Fully Automated Chlamydia Diagnostics from ORGENTEC
Mainz, June 19, 2012 – ORGENTEC Diagnostika (www.orgentec.com) has introduced six new tests for the diagnosis of infectious diseases. The new ELISA tests detect antibodies against Chlamydia trachomatis and Chlamydia pneumoniae. In addition, these test systems make it possible to differentiate between acute, latent, and chronic infection with these widespread bacterial pathogens. The new tests for the serological diagnosis of Chlamydia were developed specifically for Alegria®, ORGENTEC Diagnostika’s random access analyser.
05-10-2012 | Health & Medicine
ORGENTEC Diagnostika
Online Immunofluorescence Guide for Diagnosis of Autoimmune Diseases
Mainz, May 09 2012 – From now on the Immunofluorescence Guide for the Modern Autoimmunity Laboratory is available as a free ebook. The online reference work with numerous pictures of immunofluorescence patterns is accessible from the ORGENTEC Diagnostika website (www.orgentec.com) and from the website of the GRÜNE CLUB AUTOIMMUN (www.der-gruene-club.at). The online guide is public domain without login or registration. Whether it is the immunofluorescence pattern of antinuclear antibodies (ANA) on
02-29-2012 | Health & Medicine
ORGENTEC Diagnostika
Autoantibody Diagnostics in Autoimmune Liver Diseases
ORGENTEC Diagnostika (www.orgentec.com) has developed four new laboratory tests for the diagnosis of autoimmune liver diseases. These tests are now on the market. They are based on ELISA technology and were specifically developed for fully automated analysis with Alegria®. The new tests systems, called Anti-Sp100, Anti-gp210, Anti-LKM-1, and Anti-SLA, reliably detect specific autoantibodies that are characteristic of various autoimmune liver diseases. The tests thus also allow for reliable differentiation between these
12-01-2011 | Health & Medicine
ORGENTEC Diagnostika
A New Healthcare App: ORGENTEC Autoimmunity Guide
The ORGENTEC Autoimmunity Guide is now available for download from the Apple iTunes App Store and the Android Market. This app from Mainz-based ORGENTEC Diagnostika GmbH (www.orgentec.com) makes it possible to call up information about autoimmune diseases easily and comfortably from a smartphone or tablet – precisely, compactly, and without extensive searching. The ORGENTEC app offers comprehensive information about the diagnosis and monitoring of autoimmune diseases by means of antibody detection.

02-12-2019 | Energy & Environment
ReportsWeb
Solar Photovoltaic in Germany Market Insights to 2030 by Top Players UniCredit B …
Solar Photovoltaic (PV) in Germany, Market Outlook to 2030, Update 2017-Capacity, Generation, Levelized Cost of Energy (LCOE), Investment Trends, Regulations and Company Profiles Summary "Solar Photovoltaic (PV) in Germany, Market Outlook to 2030, Update 2017-Capacity, Generation, Levelized Cost of Energy (LCOE), Investment Trends, Regulations and Company Profiles", is the latest report from Publisher, the industry analysis specialists that offer comprehensive information and understanding of the Solar Photovoltaic (PV) market in Germany. Get Sample
10-26-2017 | Health & Medicine
ISA Pharmaceuticals
Prof. Dr. Cornelis Melief Receives Honorary Doctorate from Johannes Gutenberg Un …
- Ceremony Conventio Medicinae held at University Medical Center Leiden, The Netherlands, October 26, 2017 – ISA Pharmaceuticals B.V., a clinical-stage immunotherapy company, today announced that its Chief Scientific Officer, Prof. Cornelis Melief, has received an honorary doctorate from the University Medical Center of Johannes Gutenberg University Mainz, Germany. The honorary doctorate was awarded during a festive ceremony in Mainz on October 25, 2017. Prof. Melief was recognized for his lifetime achievements
08-18-2015 | Industry, Real Estate & Constr …
iba AG
Research project by iba AG and the Johannes Gutenberg University in Mainz
Flat products in metal processing industry are produced in several steps. The individual process steps are usually not interconnected directly, but are separated by transportation routes and interim storage facilities. When the coils are supplied to the next process step, they might be mixed up. For identifying the coils, iba AG has developed in cooperation with the Johannes Gutenberg University in Mainz mathematical algorithms and processes that are based on
12-07-2010 | Health & Medicine
ORGENTEC Diagnostika
iVISION Scanware: Automated Evaluation of Immunoblots
Mainz, 06/12/2010 – With the introduction of iVISION Scanware, ORGENTEC Diagnostika has made it possible to automate the evaluation of immunoblots. The software allows these effective and robust test systems to be objectively assessed and the laboratory test results efficiently stored and archived. By graphically representing test results, the software very effectively aids physicians and laboratory personnel in interpreting results and makes it possible to obtain a diagnosis within a few
02-16-2009 | IT, New Media & Software
CAMPUS Live
CAMPUS Live and communicate! Mainz are cooperating
Leuna / Mainz, February 2009 - Campus Live, the portal for students, universities and companies is cooperating with communicate! Mainz e. V., the student initiative for marketing and media at the Johannes Gutenberg-University Mainz. During the summer semester 2009 CAMPUS Live will start offering for the first time on the Internet various services for students, universities and companies, satisfying the basic needs of students. To ensure a good start, CAMPUS
05-24-2007 | Tourism, Cars, Traffic
Feuring - Visionary Hotel Development
Visions for the leading hotels of the world: Berno-H. Feuring, founder of the Fe …
Show kitchens, generously spaced bathrooms, theme rooms, wellness areas – not everything today’s hospitality branch claims to be an innovation, is indeed a new idea. As far back as nearly 50 years ago, Berno-H. Feuring, hotelier and founder of the group of companies with the same name, was already implementing numerous modern elements and characteristics of design and furnishing in four to five star hotels. The man from
Comments about openPR
We publish our press releases on openPR.de because we like people who are "open" - just like us.
Frank Obels, CEO, INCONET - Informationssysteme, Communication und Netzwerkberatung GmbH