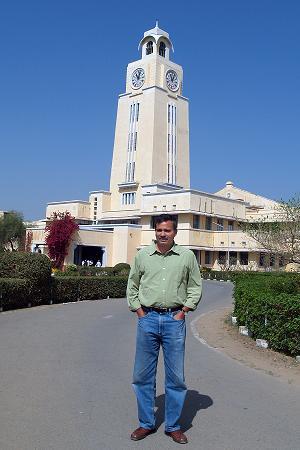 Proud to be a BITSian Kanna Rajan at BITS Pilani Rajasthan

Kanna Rajan is presently Principal Researcher for Autonomy at Monterey Bay aquarium Research Institute (MBARI), California USA. Prior to that Kanna was a Senior Research Scientist and a member of the management team of the Autonomous Systems and Robotics at NASA Ames Research Center. Kanna chose from his hectic schedule, March 5, 2008 to visit his alma mater BITS Pilani Rajasthan where he was a student during 1980-1985 and obtained his M.Sc. (Hons) Chemistry and MSc (Tech) Computer Science under the unique dual degree flexibility which allows meritorious motivated and committed science students to work for two degrees simultaneously. Going round the Institute Kanna was impressed by the new Library building, Lecture Theatre Complex, Students Activity Centre etc. He had extensive interactions with the faculty and students at the Centre for Robotics and Intelligent Systems (CRIS) and appreciated the work done on Humanoid robot by the Fab 4 current BITSians Samay Kohli, Arpit Mohan, Harsh Sinha and Prayag Mukherjee who will be participating in the Robo Games the biggest Robot competition in the world at San Francisco later this year. In his lecture on Mars or Bust, Kanna talked about the Remote Agent Experiment (RAX) which was co-winner of NASA’s 1999 Software of the year and pointed out that a successful innovator must possess Information Skills, Problem Solving Skills, Decision Making Skills and Communication Skills apart from Ability for Time, Stress and Project Management. He thanked the broad based integrated and interdisciplinary approach of education at Birla Institute of Technology and Science (BITS), Pilani Rajasthan undoubtedly a top ranking university in India yesterday and India today which gave him ample opportunities from admissions to graduations for developing such skills and acquiring such ability to ensure that winning in tough situations became his way of life. Kanna went on to describe the AI based MAPGEN (Mixed initiative Activity Planning GENerator) the ground-based decision support system which enabled human-in-the-loop oversight of plan development for Mars Exploration Rover (MER) mission operations involving the twin robot geologists Spirit and Opportunity which landed on the red planet in January 2004 to probe the history of water. MAPGEN received NASA's 2004 Turning Goals into Reality award under the Administrators Award category, a NASA Space Act Award, a NASA Group Achievement Award and a NASA Ames Honor Award. Kanna the principal investigator for MAPGEN got the 2002 NASA Public Service Medal and also the First NASA Ames Information Directorate Infusion Award. In Oct 2004, Kanna was awarded the NASA Exceptional Service Medal for his role on MER at Jet Propulsion Laboratory (JPL) the lead US center for robotic exploration of the solar system. With his current research focus on unmanned Autonomous Underwater Vehicles (AUV’s), Kanna has no doubts in stating that Autonomous robots that can "think for themselves" will soon be exploring and monitoring the dark depths of the ocean as well as the frontiers of outer space. This proud to be a BITSian Kanna Rajan firmly believes that when you take up a mission with passion, there are no dreams too large. BITS Alumni Association (BITSAA) Dr BR Natarajan Vice President BITSAA Pilani (Rajasthan) 333031 India http://www.bits-pilani.ac.in:12346/bitsaa.bits Email:brnt@bits-pilani.ac.in Birla Institute of Technology and Science (BITS), Pilani Rajasthan which has set a bench mark in industry university collaboration is one among the top ranking universities in India today offering degrees in various disciplines presently at Pilani, Dubai, Goa campuses and in the near future at Hyderabad campus apart from an array of work integrated learning programmes for HRD of a vast spectrum of Indian corporates. BITS Pilani alumni are spread across the globe from Australia to America.

02-25-2022 | Business, Economy, Finances, B …
Orion Market Research
Rising Demand for Ready to Drink Tea Market Key Players, Growth Analysis during …
The global ready to drink tea market is anticipated to grow at a substantial CAGR of 4.9% during the forecast period. Manufacturers of ready to drink tea are launching products with claims such as functional claims for immune function, low/no-sugar formulations, and products which supports common health concerns which are attracting huge population base. These products contain various nutraceutical ingredients and deliver powerful benefits and thus are gaining popularity among
06-14-2017 | Health & Medicine
P&S Market Research - Pharmaceuticals
Hepatic Encephalopathy Therapeutics Pipeline Analysis, 2017 - Clinical Trials & …
Due to various risk factors the prevalence of hepatic encephalopathy has been increasing globally. The risk factors for the disease include the consumption of alcohol, drugs addiction for sedatives such as benzodiazepines; often used in treatment of anxiety disorders that can suppress the alcohol withdrawal, challenges in the correct diagnosis and other infections, such as jaundice and deficiency of liver enzymes. According to the Journal of Gastrointestinal & Digestive System,
01-24-2011 | Health & Medicine
Club 13
Club13 for Array of Kanna Extract Products
Sceletium tortuosum (Kanna) has been used by South African pastoralists and hunter-gatherers as a mood-altering psychoactive substance since prehistoric times. The earliest written records of the use of the Kanna plant date back to 1662. Kanna was an item of bargain in the time of Jan van Riebeck, and there is affidavit of barter from the Castle in Cape Town, South Africa. The frequently able broiled sceletium was generally chewed
10-13-2009 | Science & Education
BITS Pilani Rajasthan
Freshmen orientation at BITS Pilani Rajasthan - The Change is for Real
It is indeed a matter of pride that for the year 2009 the Birla Institute of Technology and Science - BITS Pilani has been ranked among the top ranking universities along with IITs in various Magazine surveys such as India Today, Outlook, LiveMint etc. BITS offers degrees in various disciplines presently at Pilani, Dubai, Goa and Hyderabad campuses. BITS is well known for its transparency in selection criteria based on
10-15-2008 | Leisure, Entertainment, Miscel …
BITS Pilani Rajasthan
Autumn Seasons Greetings from BITS Pilani Ragamalikans
The eminence of autumn is best understood from Stanley Horowitz quote, "winter is an etching, spring a watercolor, summer an oil painting and autumn a mosaic of them all". Every year, for the Ragamallikans of Birla Institute of Technology and Science - BITS Pilani located in the heart of the Shekhawati region of Rajasthan, it's a mission with passion to stage a dance show during Navratri which is the jewel
Comments about openPR
OpenPR ist the nicest and most clearly laid out PR platform I have seen to this day. The press releases are displayed very nicely and clearly and without any unnecessary frills. The updates are fast and the finished release looks appealing and is clearly legible. Even with 16 years of experience one discovers new things from time to time. Congratulations!
Gabriele Ketterl, Director Marketing & PR, Menads