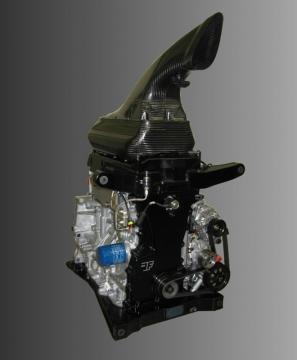 Formula Master today exclusively unveiled the Honda K20A engine, which will power the Formula Master race cars this season.Featuring lay-out revisions to reduce weight, it will include a new air intake system with four dry-by-wire throttles, new pistons, conrods dry sump, oil pump and water pump.Series Chairman Mauro Sipsz said: "We are really happy with how all the development has gone on the Honda K20A engine over the past months. As scheduled, we will start delivering engines and upgrade kits to the teams next week." For more information, please visit www.formulamaster.net N.Technology’s Formula Master race car features Magneti Marelli hydraulic gearbox control system with gearbox and clutch wheel paddles control. With advanced aerodynamics, it weighs just 550kg including the driver and runs on control tyres by Yokohama.The first car in the world to secure 2008 FIA homologation, the Formula Master single-seater has generated excitement from all sectors thanks to its dynamic styling, light-weight body and powerful Honda K20A engine.Mandoga Media Alexander Sandvoss Residence Beausjour 06240 Beausoleil France info@Mandoga.comMandoga Media is a german speaking Media Office, which provides Press Releases, Photographs and Broadcast Video Footage from Central Europe.