Monaco Humanitaire 2008, a Photographic Exhibition at the Grimaldi Forum 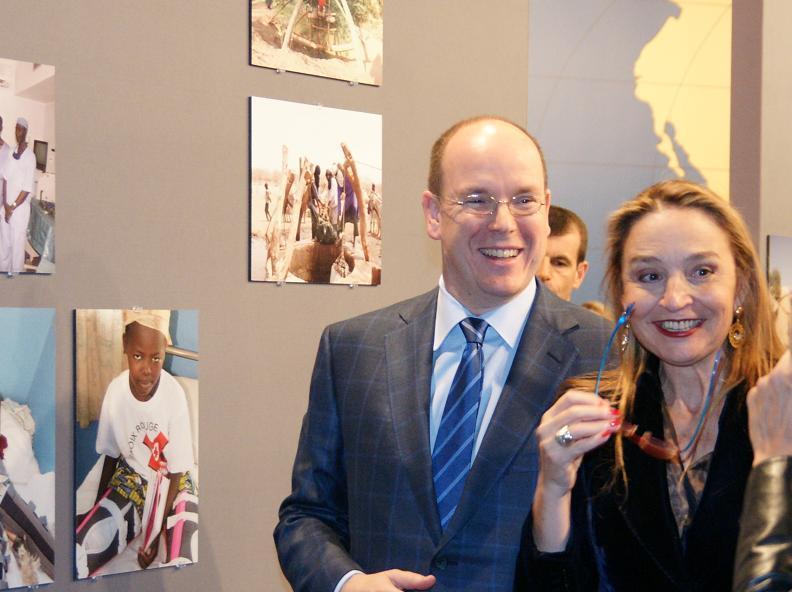 Monaco Humanitaire 2008 is a Monegasque association set up for the organisation of a photographic exhibition in order to illustrate the humanitarian action carried out globally by the Principality of Monaco over the past fifty years.This significant humanitarian involvement, highlighted by prominent international photographers including Duncan Willets, Nick Danziger, Patrick de Wilde and others, in addition to local photographers, will be showcased to the public on the occasion of H.S.H. Prince Albert II’s 50th birthday.These distinguished photographers have all travelled to countries where the Principality of Monaco has undertaken humanitarian action: schools, hospitals, orphanages etc. with the participation of the Monaco Government or through Monegasque charitable organisations, some of which have been settled themselves on site permanently.The list of such humanitarian action is impressive for a state the size of the Principality and is carried out in countries worldwide: Madagascar, Tunisia, Morocco, Niger, South Africa, Lebanon, Egypt, Ethiopia, Indonesia, India, Sri Lanka, Brazil and Colombia.Monaco Humanitaire 2008, a key event of the “Monte Carlo Printemps des Arts” will be officially unveiled by H.S.H. Prince Albert II on 15th March 2008 in the Grimaldi Forum where it will be held until 30th April. The exhibition will then go on tour and will feature at the 2008 Beijing Olympic Games.The purpose of the exhibition is to turn the spotlight on the extremely important humanitarian work carried out by the Principality and the impact it has throughout the world. Such action, often little-known or unknown, represents the resolve of the Princes of Monaco, reiterated by the Sovereign Prince in his investiture speech in 2005.MANDOGA MEDIA PR-Photography-Broadcast Footage Evelyn Kilb / Alexander Sandvoss Résidence Beauséjour Bâtiment C 2 628 Moyenne Corniche F-06240 Beausoleil info@mandoga.com www.mandoga.com Fax : 0033 493 41 60 25 Telefon : 0049 179 490 22 68Mandoga Media is a german speaking Media Office, which provides Press Releases, Photographs and Broadcast Video Footage from Central Europe.

You can edit or delete your press release Monaco Humanitaire 2008, a Photographic Exhibition at the Grimaldi Forum here

04-07-2011 | Fashion, Lifestyle, Trends
Mandoga Media
Golden Pen of H.S.H. Prince Albert of Monaco to be auctioned at Ebay
A german private Collector is auctioning the golden, personal Pen of H.S.H. Prince Albert of Monaco at Ebay Germany. The Collector from the South of Germany bought the Pen himself at a Charity Auction in December 2003 in Monte Carlo. The Pen is named “Prestige Rainier III”, thus a Hommage to H.S.H. Prince Rainier, who died in 2005. The Pen is made from 18 Carat White Gold and contains 4 Rubies
05-05-2008 | Sports
Mandoga Media
A1GP 2008/09 Season opener to be held in Italy
A1GP World Cup of Motorsport has confirmed the first race of the 2008/09 season will be held at the Mugello circuit in Italy on 21 September 2008. The A1GP organisers have taken this opportunity at the start of 2007/08 championship finale at Brands Hatch, when there is a large media focus on the series, of announcing a brand new venue for the start of Season Four. It will be the
04-14-2008 | Health & Medicine
Mandoga Media
Madonna to Join Sharon Stone and Harvey Weinstein at Annual amfAR Fundraising Ga …
Madonna, Sharon Stone, Harvey Weinstein, Michelle Yeoh, Michel Litvak, Carine Roitfeld, Caroline Gruosi-Scheufele, and amfAR Chairman of the Board Kenneth Cole will serve as chairs of amfAR’s Cinema Against AIDS, to be held on May 22 during the 61st annual Cannes International Film Festival. The evening will be presented by Bold Films, Chopard, and the Weinstein Company. The annual star-studded event, which will benefit amfAR, will take place at Le Moulin
03-17-2008 | Tourism, Cars, Traffic
Mandoga Media
Luxury luggage Systems by HANK exhibit at TOP MARQUES MONACO 2008
To create a travelling system from scratch to the individual desire of each client- that is HENK. HENK is about a dream- to create an extremely strong yet exceptionally light case which would not only be functional and very comfortable, but also a real eye-catcher. It started with intensive research outside the narrow field of suitcase design to see what there was to learn from Formula One and aircraft technology. The