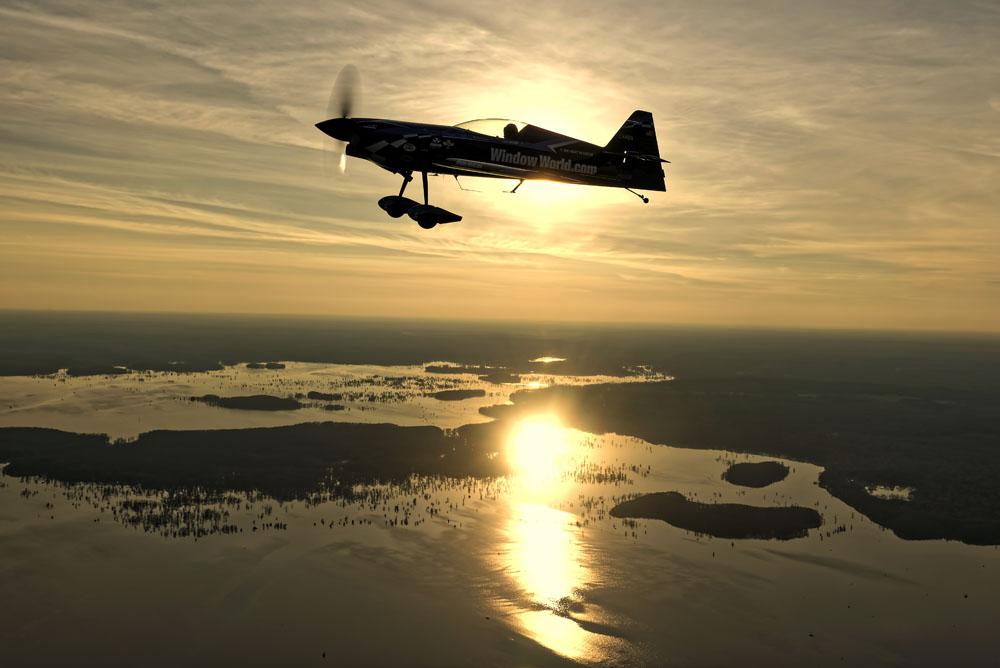 DENISON, TX. In a run equaled by no other pilot in history, Rob Holland won his sixth straight US National Aerobatic title at the 2016 IAC US National Championships in Texas. Flying in his MXS-RH, Holland also secured an unprecedented seventh National Four-Minute Freestyle gold medal. Holland’s championship-winning performance at Nationals places him in elite company as one of the most celebrated and decorated aerobatic pilots in US history.Held at the North Texas Regional Airport in Denison, Texas, the six-day contest features the best aerobatic pilots from all across the United States. Challenged with strong competition, Holland scored his sixth consecutive title in dramatic fashion, coming from behind with a stunning performance in his final flight to clinch gold. Holland’s performance also earned him a place on the US Aerobatic Team who will compete at the World Aerobatic Championships in South Africa in 2017."There are some amazingly talented pilots flying at the Nationals and I'm honored to share the sky with them,” said Holland of his championship win. “I just want to keep evolving and growing as an aerobatic pilot and I'm humbled that my hard work has placed me at the top. It has been a team effort and I can't thank enough all the incredible people who have helped me in so many ways".Holland’s win at Nationals adds further luster to his already exceptional competition record. Recent gold medals at the FAI World Air Games in Dubai and the Sky Grand Prix of Aerobatics in South Africa bring his total medals in international competition to 19, including eight golds. His seven National Freestyle championships, three World Freestyle championships, and six National Aerobatic titles are all feats accomplished by no other aerobatic pilot in history. For more information on Rob Holland Ultimate Airshows or to find out where you can see him fly this year, go to http://www.ultimateairshows.com. You can also follow Rob Holland on Twitter, Instagram, or Facebook.Rob Holland is one of the most decorated, respected, and innovative aerobatic pilots and airshow performers in the world today. Flying the amazing MXS-RH Aerobatic Aircraft by MX Aircraft, Rob Holland brings an unrivaled performance to airshows across North America, thrilling millions of spectators with his dynamic and breathtaking display. Winner of six consecutive US National Aerobatic Championships, a run accomplished no other pilot in history, Rob is also the three-time, defending World Freestyle Aerobatic Champion and was honored by the International Council of Airshows (ICAS) with the prestigious Art Scholl Award for Showmanship, the highest honor any airshow pilot can receive. A 1997 graduate of Daniel Webster College with Bachelor of Science degrees in Aviation/Airway Management and Aviation Flight Operations, Rob holds ratings as an Airline Transport Pilot (ATP), Certified Flight and Ground Instructor (CFI, CFII, IGI, AGI), as well as glider and seaplane ratings. A professional airshow and aerobatic pilot for the last 14 years, Rob has accumulated more than 11,000 hours flight time in more than 170 different types of aircraft. Rob and his wife Jessica reside in Nashua, New Hampshire.Rob Holland Ultimate Airshows 117 Perimeter Rd Nashua NH 03063 (603) 401-0001Press Contact: Steven Serdikoff, Media Coordinator steve@ultimateairshows.com (610) 457-6400

10-05-2017 | Sports
Rob Holland Ultimate Airshows
Rob Holland Becomes Only the Second Pilot in History to Win Seven US National Ae …
OSHKOSH, WI. Winning his unprecedented seventh consecutive US National Aerobatic Championship title, Rob Holland has equaled the legendary Leo Loudenslager for the most national titles in US history, an achievement previously thought by many to be unreachable. Adding further luster to his championship run, Rob also continued his complete dominance in the freestyle category, winning his record-setting eighth US National Freestyle championship only weeks after achieving his unprecedented fourth consecutive

10-29-2018 | Fashion, Lifestyle, Trends
The Tech Reps
National Smart Home Day
National Smart Home Day Event Press Release National Smart Home Info@NationalSmartHome.org For Immediate Release: National Smart Home Plans National Smart Home Day to help educate and bring awareness to homeowners for smart home living National Smart Home will hold National Smart Home Day on Saturday November 3rd for manufacturers suppliers, dealers and homeowners. The event, which will be held at Rayva Home theaters showroom in Valhalla NY and streamed live across the
09-09-2016 | Leisure, Entertainment, Miscel …
Phatmagic
NATIONAL AWARD
From Abracadabra to alakazam magician inline for National award Midlands, Sept. 7. 2016 - A MAGICIAN who has fought back from depression could be in line to win a national award. Eddie Young, who runs PhatMagic, has been nominated for a Kallikids award The 42-year-old, from Branston, set up Phat Magic more than four years ago after his wife, Debbie, bought him a magic set to 'give him something to do' while
10-17-2014 | Health & Medicine
Relaxa UK
National Stress Awareness Day
National Stress Awareness Day is on Wednesday 5th November 2014. Relaxa is offering employee stress & wellbeing health promotion packages starting at £255 on or around this date - incorporating a range of stress & wellbeing activities for your staff. There are 9 cost-effective stress and wellbeing promotion packages available below: 1) Stress Health Promotion Package 1 - £255.00+vat 2) Stress Health Promotion Package 2 - £399.00+vat 3) Stress Health Promotion Package 3
04-16-2012 | Business, Economy, Finances, B …
The AGRICOM Project
AGRICOM National Workshops Started
Partners from the European AGRICOM project have carried out national workshops in Germany and Greece on February 14th and 15th 2012, respectively. These national workshops, along with the upcoming national workshop in Italy and the Netherlands, support one of the key initial steps of the AGRICOM project, namely the execution of a detailed needs analysis in the agricultural sectors of the partner countries regarding vocational educational training (VET) and competence
02-02-2012 | Business, Economy, Finances, B …
The National Trust bucks economic trends to have bumper December
The National Trust
The National Trust has reported a substantial increase in its visitor numbers, and retail and catering sales in December 2011 compared to the previous December, despite a backdrop of challenging economic times and lack of consumer confidence. There were more than half-a-million (521,000) visitors to Trust properties in December 2011, an increase of 74 per cent on the previous year*. Factors affecting the large jump in visitor numbers include the mild
03-23-2011 | Associations & Organizations
AllAboutCareer
National Employability Campaign Begins
Graduates are increasingly unlikely to find themselves with a place on a graduate scheme as the number of student graduating vastly outstrips the number of places available. Despite an expected increase in the number of graduate vacancies in 2011 by 3.8% the number of vacancies offered according to the Association of Graduate Recruiters will still be less than 21,000. The AllAboutCareers.com National Employability Campaign, which is aimed at all undergraduates, hopes
Comments about openPR
OpenPR is clearly structured and remains true to its principle of confining itself to the essential parts. OpenPR has proven to be a very good and reliable partner to our media agency: Within the shortest time the releases are online and go down well with the media representatives. The success of OpenPR is reflected in the steadily increasing number of press releases. It is good that OpenPR exists!
Ursula Koslik, Director Marketing & PR, F+W Hamburg