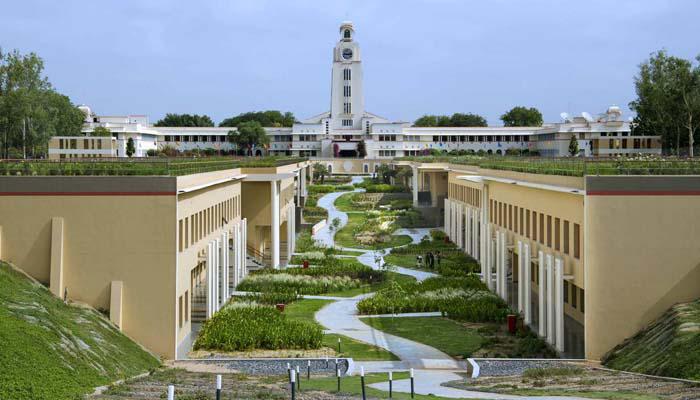 Belling the Cat is Proverb but Belling the one among top in world ranking Birla Institute of Technology and Science - BITS Pilani Clock Tower is indeed an Interdisciplinary Mission with Passion for the students and alumni.

Visible from miles and miles around, the BITS Pilani Clock Tower is as synonymous with Pilani, as the Harvard Yard and the King’s College Chapel are with their respective institutes. The clock tower constructed in Vikram Samvat 2007 which corresponds to 1950 was inaugurated on 11 Feb 1951 by the then President of India Dr Rajendra Prasad.

On 20th October 2011, to mark the 41st edition of BITS Pilani’s coveted cultural Festival Oasis 2011, the core team members climbed the tower to manually release the hammer to ring the bell 41 times thus breaking the nearly four decades of sound of silence of the tower.

The clock tower of BITS-Pilani is an engineering marvel and its intricate clockworks ensure the clock ticks with precision. The clockworks are controlled by a pendulum and Graham Escapement. The movement is guided through gears and shafts to the hands on the four clock faces. The bells are driven by levers and three distinct gear trains. To simplify repair work and to aid conversation, the Team named these trains the Gong Train, the Chiming Train, and the Striking Train.

With students of from other engineering and science disciplines joining, the clock tower project was truly becoming interdisciplinary which is the hallmark of BITS education. Technology was deployed to measure the efficacy of the repairs - the Electronics Sub-team used sensors to measure drift of the clock and continuously monitor the pendulum and all four faces.

Prof Anshuman from Civil Engineering department and Sri Bheem Technician from Workshop joined hands with the students to steer the project. Alumni also highly appreciated the support extended by Sri Ram Awtar Soni from BITS Workshop who retired in 2013.

The break on through to the other side of the silent clock mechanism came on 30 Sep 2016 when the chiming train played short melody every 15 minutes and the gong started ringing every hour. Its for sure that the sounds from BITS Pilani tower is bound to please Cooke & Kelvey C&K - a Master Creator of Clocks from Calcutta whose four faced turret clock in the Calcutta port trust tower set in 1899 continues to tick till date.

About BITSAA:
BITSAA International is a global inclusive all-volunteer organization representing BITS Pilani Alumni. The organization is engaged in a wide range of activities to help the alumni remain connected with Alma mater BITS Pilani. The focus is on projects which enhance the quality of BITS education, its infrastructure, its student body, affordability of BITS education to the economically disadvantaged, and ultimately the BITS brand.

08-22-2022 | Associations & Organizations
Guyson International Ltd
Guyson Staff Clock-Up 180 Years!
At Guyson International's Skipton headquarters, Monday 15th August saw rain, much needed, and celebrations, much deserved. Employees from the company's blast and wash division gathered outside to congratulate seven employees who were awarded long service awards. And between them amassed a total of 180 years of service at Guyson, with one, Keith Miller celebrating 50 years of service. In typical unpredictable UK weather, after so many days of bright hot sunshine,
04-06-2021 | Associations & Organizations
C & D Locksmith
Locksmith Provides Around the Clock Services
Fort Worth, Fl – April 5, 2021–Have you ever experienced the moment of horror when you lock your keys in the car at night and nowhere is open? Locking your keys in your car can already be a traumatic experience. Your heart begins to race, you pull the handle a few times, you frantically check your pockets; and then you see them. Your keys are sitting snugly in the ignition
02-25-2021 | IT, New Media & Software
AMA Research & Media LLP
Time Clock Software Market SWOT Analysis by Key Players | On the clock, Time Clo …
Latest released the research study on Global Time Clock Software Market, offers a detailed overview of the factors influencing the global business scope. Time Clock Software Market research report shows the latest market insights, current situation analysis with upcoming trends and breakdown of the products and services. The report provides key statistics on the market status, size, share, growth factors of the Time Clock Software. The study covers emerging player’s
02-11-2021 | Advertising, Media Consulting, …
Ken Research Pvt Ltd
Global Watch Clock Measuring Device Market | Watch Clock Measuring Device Indust …
Watch, clock and measuring device market comprises of the sales of watch, clock, measuring device & related services to measure the time and physical quantity. Watch is portable timepiece, which is worn by people around the wrist, attached by a strap. Clock is a device used to measure and indicate time, using the pointers moving over a dial. Measuring device is an instrument used for measuring the various parameters in
04-24-2019 | Industry, Real Estate & Constr …
Market Density
Global Atomic Clock Market Insights, Forecast
This report presents the worldwide Atomic Clock market size (value, production and consumption), splits the breakdown (data status 2013-2018 and forecast to 2025), by manufacturers, region, type and application. This study also analyzes the market status, market share, growth rate, future trends, market drivers, opportunities and challenges, risks and entry barriers, sales channels, distributors and Porter's Five Forces Analysis. Atomic clock is a clock device that uses an electron transition
09-26-2018 | Business, Economy, Finances, B …
Caesium and Hydrogen Maser Atomic Clock Market Report 2018
Caesium and Hydrogen Maser Atomic Clock Market Report 2018: Segmentation by Prod …
Global Caesium and Hydrogen Maser Atomic Clock market research report provides company profile for Chengdu Spaceon Electronics, Casic, Orolia, VREMYA-CH JSC, Leonardo, Microsemi, FEI, Oscilloquartz SA, Kernco, Inc., Chronos Technology and Others. This market study includes data about consumer perspective, comprehensive analysis, statistics, market share, company performances (Stocks), historical analysis 2012 to 2017, market forecast 2018 to 2025 in terms of volume, revenue, YOY growth rate, and CAGR for the
Comments about openPR
OpenPR is clearly structured and remains true to its principle of confining itself to the essential parts. OpenPR has proven to be a very good and reliable partner to our media agency: Within the shortest time the releases are online and go down well with the media representatives. The success of OpenPR is reflected in the steadily increasing number of press releases. It is good that OpenPR exists!
Ursula Koslik, Director Marketing & PR, F+W Hamburg