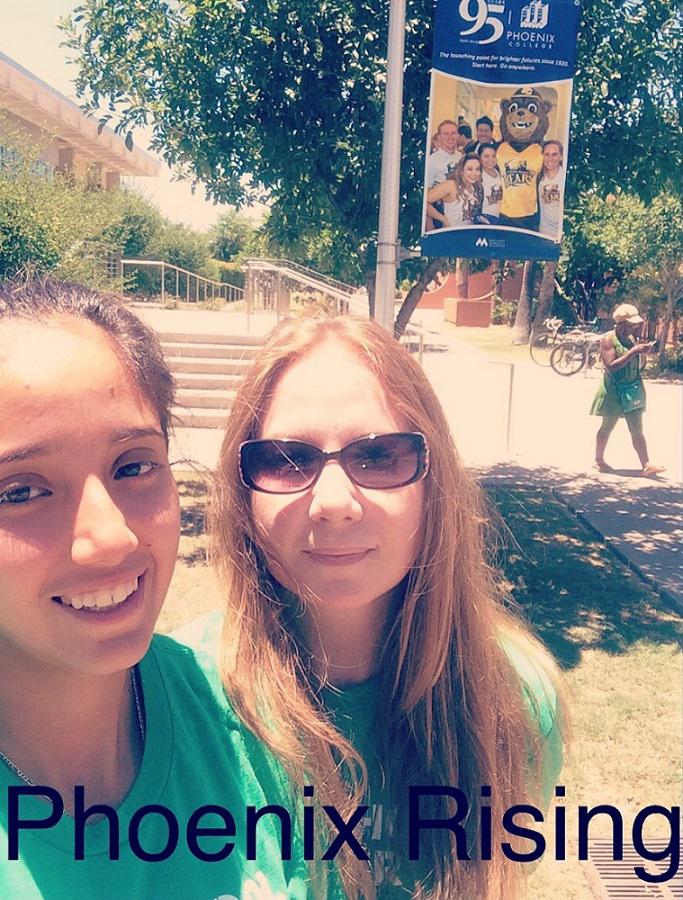 Maria Mendez and Wendy Bias together at Phoenix College

(Phoenix, AZ) - A nationwide movement to “rethink and reimagine high school” is underway. XQ: The Super School Project is spearheaded by Russlynn Ali, chief executive officer of XQ Institute, and Laurene Powell Jobs, president of Emerson Collective. On Aug. 4, 2016 XQ awards five to 10 winning teams $10 million to fund their ideas to transform our industrial era educational system for a new age. Powell Jobs hopes the competition will uncover “game-changing thinking, a moonshot” idea to modernize learning for the 21st Century. Local student and coach, Maria Mendez, is proud to be a part of the XQ semi-finalist team, Phoenix Rising. Phoenix Rising is among 350 innovative high school models chosen from an initial 10,000 concepts. What sets Phoenix Rising apart from the competition is its skunkworks educational design. Skilled teaching teams partner with student cohorts and use design thinking, the Socratic method, and integrated learning to provide real world solutions for business and government. Supported by staff, students brainstorm solutions, work in project teams, and produce prototypes and white papers to be implemented by the organizations who hire the school skunkworks as consultants. In this way, each and every student participates in an internship, receives guidance and mentoring, develops critical thinking, and obtains invaluable job skills all while learning the standards they need for post-secondary education and long-term career success. Arizona State University – whose own charter school ASU Preparatory Academy achieved a 100 percent graduation rate in 2016 – agreed to sponsor the charter for the proposed Phoenix Rising School. If selected as an XQ Super School winner, Phoenix Rising Charter School will open in the Greater Phoenix area. The Rising Education model is flexible and applicable to a wide range of communities and capable of being adapted globally and nationally as the new education model for our evolving educational landscape.“We appreciate ASU’s support of Phoenix Rising and look forward to living up to their high standards,” Mendez said. The Phoenix Rising team was formed in October 2015 by Wendy Bias and quickly became a national, grassroots movement. “We have a wonderful group of volunteers working on this project who truly believe in the Rising Education model,” Bias said. “They give extensively of their free time, despite the commitments of their full-time jobs, because they believe in fueling the next wave of innovation in education. Our team wants to support a coast-to-coast movement that helps every city rise to future challenges.”Mendez is a student at Copper Canyon High School. As a coach of the 2016 Northern Arizona Invitational Champion AZ Diesel soccer squad, she knows it takes a team that works together, remains persistent and has a lot of grit to achieve success. Mendez works to improve her own skills through organizations like Tomorrow’s Involved Leaders Today (TILT) run by the City of Phoenix, the National Honor Society (NHS) and Future Business Leaders of America (FBLA Arizona). She wants to ensure that every student has access to educators who care about empowering them for the future.“I wanted to join XQ after finding out there are people trying to change education because they don’t like how it stayed the same for over 100 years. I think it is really great that they are not trying to help themselves but to help others.” said Mendez. “I like that the team is not afraid to step up and say, ‘This is wrong. We shouldn’t be doing this.’ Phoenix Rising will fight for what is right and for what is best for students.”For more information on the XQ Super School Project, visit www.xqsuperschool.org. Learn more, show your support and join the conversation by following @XQPhoenixRising on Twitter and Instagram and PhoenixRisingAZ on Facebook and Snapchat. Learn more about Phoenix Rising at www.risingaz.com.(For more information regarding Maria Mendez or Phoenix Rising, please contact info@risingaz.com.)Phoenix Rising High School’s mission is to create independent, thoughtful, problem-solving graduates through the use of a skunkworks educational program. We strive to mentor young people into adults ready for life by using a subject-integrated, project-based program incorporating all learning styles in conjunction with internships where students experience real life application through paid opportunities.4545 N 67th Ave Phoenix, AZ 85033

08-25-2020 | IT, New Media & Software
Orian Research
Airline Ancillary Services Market 2020 Industry Will Grow in Near Future by Grow …
Airline Ancillary Services‎‎‎‎‎‎ Market 2020-2025 Industry research report is an in-depth and detailed study on the present situation of the Airline Ancillary Services‎‎‎‎‎‎ industry by focusing on the worldwide market. Additionally, this report presents a basic outlook, share, size, growth, dynamics, competitive analysis, manufacturers, and global business strategy & statistics analysis. This report is segmented on the basis of product type, end-user, application, and geographical regions. Airline Ancillary Services‎‎‎‎‎‎ Market 2020-2025
06-25-2018 | IT, New Media & Software
Orian Research
HDI Market Size, Global Industry Share, Regional Analysis, Type and Application …
HDI Market size, Industry share, growth, demand and outlook of global from angles of players, regions, product types and end industries Overall study covers in this report; this report analyzes the top players in global and United States market, and splits the market by product type and applications/end industries. Get Sample Copy of this Report @ https://www.orianresearch.com/request-sample/554876 . HDI Market report provides a basic overview of the industry including definitions, classifications, applications and
05-18-2017 | Leisure, Entertainment, Miscel …
Music Promotion Club
Kxng Leo Is Offering Fans Some Of The Best Hip Hop And Rap Tracks
With hip hop thoroughly evolving from what it was, the rappers in soundcloud are becoming popular! Hip hop and rap is a standout and getting incorporated in the mainstream songs. Numerous artists are using it in their songs. In soundcloud, there is a well known singer who is making incredible hip hop and rap tracks. Dimitrius Mendez otherwise known as Kxng Leo is one of the most up-to-date and sought-after
04-12-2017 | Business, Economy, Finances, B …
Sonitrol Great Lakes
Optimist Club of Downtown Flint announce ‘Officer of the Year’ awardees
Seven area police officers will be recognized by the Downtown Flint Optimist Club at a luncheon celebrating National Law Day, Monday, May 1. Sonitrol Great Lakes - one of Michigan’s largest locally owned and operated security firms – is proud to again sponsor the annual event, which will be held beginning at noon at the Genesee Career Center, 5081 Torrey Road in Flint. The awards honor deserving officers who have demonstrated
12-15-2011 | Arts & Culture
Cre8ive Nsights
Former Dothan Resident & Northview Graduate Shows HIV Awareness Play In Dothan
Dothan, AL - December 14, 2011 - Cre8ive Nsights, Inc. announce the showing of Positively Infected by playwright Nykieria Chaney, at Doug Tew Center Sunday, January 15, 2012. CDC estimates that more than one million people are living with HIV in the United States. One in five of those people living with HIV are unaware of their infection and someone new is infected with HIV every nine and a half
07-22-2011 | Business, Economy, Finances, B …
Hypo Venture Capital Zurich
Hypo Venture Capital Headlines: Leading Mexico drug gang suspect arrested
By Tracy Wilkinson, Los Angeles TimesJune 22, 2011 A top leader of the notorious La Familia drug-trafficking gang, locked in an especially deadly internal fight in recent months, has been captured by Mexican federal police, authorities announced Tuesday. Jose de Jesus Mendez, alias “El Chango,” one of Mexico’s most-wanted drug lords, was taken into custody in the central Mexican state of Aguascalientes, apparently without a struggle, authorities said. Mendez led a faction of
Comments about openPR
OpenPR ist the nicest and most clearly laid out PR platform I have seen to this day. The press releases are displayed very nicely and clearly and without any unnecessary frills. The updates are fast and the finished release looks appealing and is clearly legible. Even with 16 years of experience one discovers new things from time to time. Congratulations!
Gabriele Ketterl, Director Marketing & PR, Menads