Checkers Nr. 1: Checkrs — The mobile strategy experience for all fans of Checkers 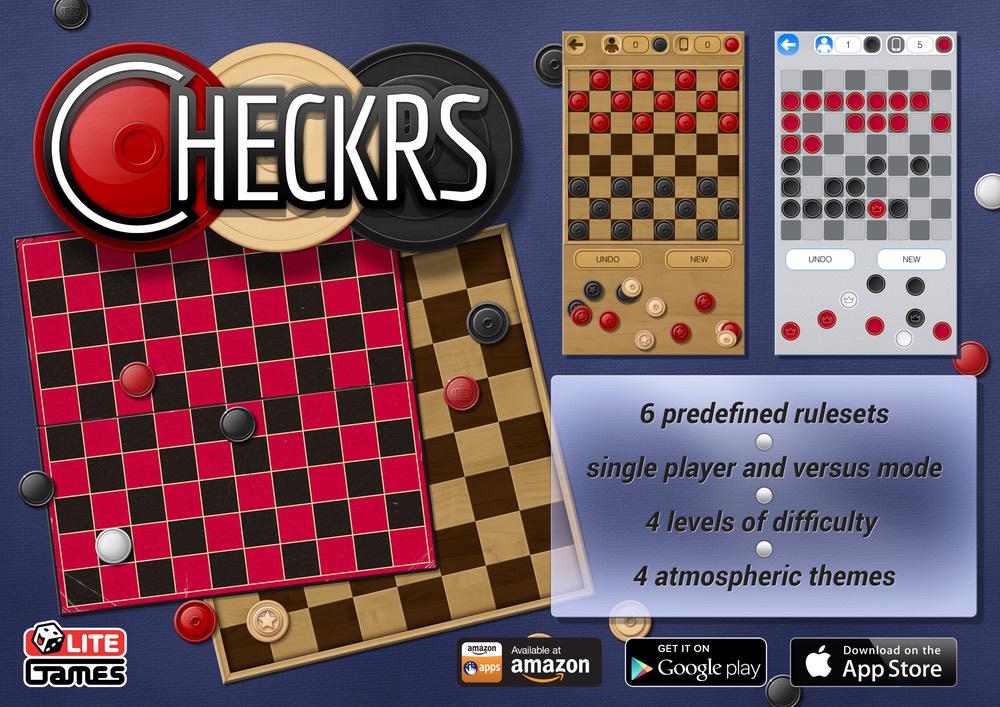 Checkers board game for iOS and Android

LITE Games launches the classic board game for both the Apple App Store and the Google Play Store.Hamburg, Dec 10, 2015 — The casual games publisher LITE Games adds yet another board game classic to its portfolio. Checkers fans rejoice!Checkers is one of the most well-known and popular games of all time, so it’s not surprising that the mobile games publisher, LITE Games from Hamburg, has also added this classic board game to its portfolio. This pocket-sized checkers board will be launched worldwide on 12/10/2015 and can be played on both iOS and Android systems. The simple, basic principle of the game has remained entirely unchanged in this mobile adaptation. However, the free checkers app also will also offer a wide range of customization options. Players will find it easy to get their bearings in the intuitive app which can be fully customized to suit their preferences. For example, apart from the default "International Checkers" configuration, it is also possible to select other game modes such as English, German, Turkish, or Russian checkers. A quick overview of the rules of checkers even allows beginners to quickly get started playing this highly popular board game."With 'Checkers Nr. 1: Checkrs', we wanted to develop the best Android and iOS adaptation of this traditional board game which is why we focused on reproducing an authentic playing experience for the mobile version that is as realistic as possible. Four detailed game boards are available to the player, allowing him to create his own individualized ambiance," comments Christian Twellmann, CEO of LITE Games GmbH.Naturally, this checkers adaptation also allows for two-player duels. Player can pair up and challenge each other to a round on a single device. Just as in single-player mode, options such as "Time limit", or "Show possible moves" can also be activated in this mode.- Checkers Nr. 1: Checkrs is completely free to play - For Android versions 4.1 and up or iOS versions 7 and above - 38 MB on iOS and 34 MB on Android - Optimized for phones and tablets (both Android and iOS) - Available worldwide starting on 12/10/2015 in the Google Play Store and the Apple App Store.LITE Games GmbH was founded in 2014 in Hamburg, Germany and focusses on developing and publishing "casual classics" for the mobile operating systems Apple iOS and Android. The constantly expanding portfolio of LITE Games currently comprises more than 30 games, the emphasis lies on the adaption of classical game concepts, and contains card games like Rummy, Canasta or Crazy Eights as well as board-, brain- or dice- games. With more than 23 million downloads and many internationally top ranking apps in the most important app stores (Apple, Google, Amazon) LITE Games is one of the leading providers of mobile casual games.Sven Jürgens Marketing ManagerLITE Games GmbH Mittelweg 24 d 20148 Hamburg/GermanyTel: +49 40 211 078 66 Mobile: +49 160 99 00 07 19 Fax: +49 40 211 078 67 Email: sven.juergens@lite-games.com Facebook: www.facebook.com/LiteGames

You can edit or delete your press release Checkers Nr. 1: Checkrs — The mobile strategy experience for all fans of Checkers here

12-16-2016 | IT, New Media & Software
LITE Games GmbH
Mobile games publisher LITE Games releases iOS version of “Mills” with onlin …
Hamburg, 12/15/2016 - Casual games publisher LITE Games, headquartered in Hamburg/Germany, has released a big update for the iOS version of the successful app “iMills” today. About five years after the initial launch the update delivers the long anticipated online multiplayer mode as well as numerous other improvements (and a new name: “Mills”). Mills is a hugely popular game throughout the world, characterized by the fact it is so easy to
12-02-2016 | IT, New Media & Software
LITE Games GmbH
The LITE Games CrossPromo Program as a free support for indie developers and sta …
Hamburg, 01.12.2016 – Hamburg-based casual games publisher, LITE Games, is launching its CrossPromo program to promote new apps. This will enable indie developers and start-ups on a limited budget to launch their app and gain greater visibility in the app stores. So how does it work? LITE Games GmbH was founded in Hamburg in 2014 and focuses on the development and publishing of “casual classics” for mobile iOS and Android platforms.
04-20-2016 | IT, New Media & Software
LITE Games GmbH
LITE Games congratulates Brian McCarthy – the inventor of the popular Power Ga …
Hamburg, 04/20/2016 – On the occasion of this anniversary, we take a look at one of McCarthy’s great strategy games: The Power Game! Start from the beginning. Brian McCarthy is a pioneer. No, he’s a revolutionary! Always in search of new ways and always on the look-out for the perfect strategy game! The game should be as easy as possible and just subjected to few regulations! At the same time,
03-31-2016 | IT, New Media & Software
LITE Games GmbH
The new chess puzzle app for everyone who loves tricky chess puzzles
LITE Games releases chess puzzle app for iOS and Android. Hamburg, 31 March 2016 – Mobile games publisher LITE Games from Hamburg is releasing a chess puzzle game in cooperation with Germany's leading puzzle creator: Stefan Heine. Historically, chess puzzles go back to the Middle Ages and have been solved by countless chess players around the world since that time. The objective in a chess puzzle is to checkmate the black