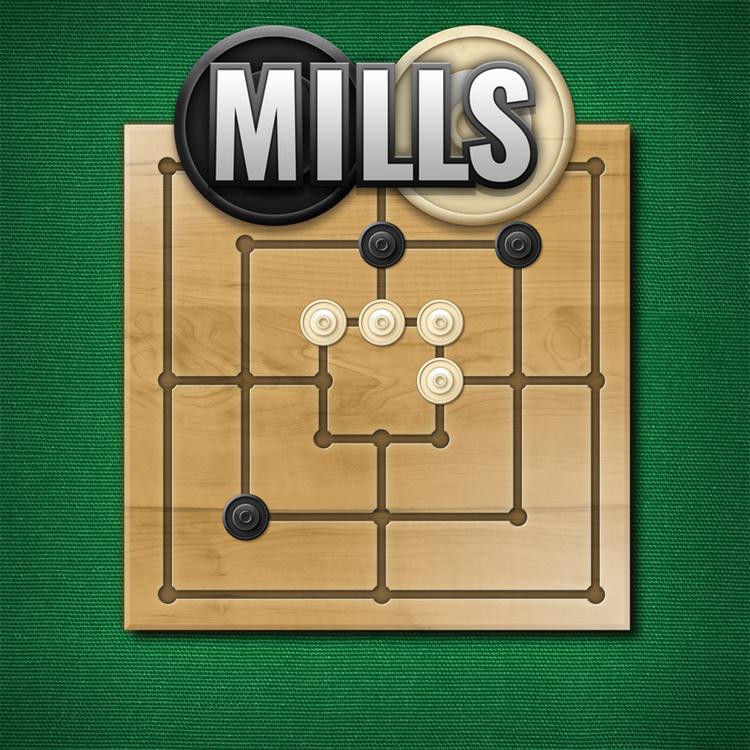 Hamburg, 12/15/2016 - Casual games publisher LITE Games, headquartered in Hamburg/Germany, has released a big update for the iOS version of the successful app “iMills” today. About five years after the initial launch the update delivers the long anticipated online multiplayer mode as well as numerous other improvements (and a new name: “Mills”).Mills is a hugely popular game throughout the world, characterized by the fact it is so easy to learn – and it’s even older than chess. Nowadays the game that's also well known as Nine Men's Morris, The Mill Game, or Cowboy Checkers is a national pastime in many countries.With the Apple iOS version of the free mobile game having already recorded over a million downloads, the game takes the next step to improve the game experience even further. The update was already released for Android about a month ago and was very well received with over 100,000 new downloads and an overall rating of 4.28 stars.The heart of the new version is certainly the online multiplayer mode, in which players can put their skills to the test in matches against opponents from all over the world. Also new are the international online ranking and comprehensive statistics which enable players to track their own progress.“We are extremely excited about the new online multiplayer feature”, says Chris Twellmann, Managing Director at LITE Games GmbH. “The ability to play Mills against friends online and to then be able to compete in ranking lists is a feature that a large number of players have been requesting for some time.”But the game continues to be just as fun offline as well. Apart from the powerful AI with various difficulty levels, there are now also customizable rules for a personalized game experience, as well as numerous achievements to unlock. Naturally, the new version also offers the option of replacing an offline computer opponent with a human player, allowing users to play a round of Mills with friends in real life without needing a game board.In addition to a graphical overhaul of the game, localization into many new languages has been added. The Mills board game is now available in English, German, French, Italian, Spanish, Portuguese, Dutch, Swedish, Turkish, Russian, Polish, Hungarian, Chinese, and Japanese. - Mills for iOS can be played for free - 3 game modes: 2-player online, 1-player offline, 2-player offline - For iOS version 7.0 and higher - Size: approx. 170 MB - Playable on iPhone, iPad and iPod - Supports 14 languagesAvailable from the 12/15/2016 on the Apple AppStore.Further information regarding the game can be found on the website of the company: http://www.lite-games.com/games/millsLITE Games GmbH was founded in 2014 in Hamburg, Germany and focusses on developing and publishing "casual classics" for the mobile operating systems Apple iOS and Android. The constantly expanding portfolio of LITE Games currently comprises more than 30 games, the emphasis lies on the adaption of classical game concepts, and contains card games like Rummy, Canasta or Crazy Eights as well as board-, brain- or dice- games. With more than 25 million downloads and many internationally top ranking apps in the most important app stores (Apple, Google, Amazon) LITE Games is one of the leading providers of mobile casual games.Malte Köpke Junior Marketing ManagerLITE Games GmbH Mittelweg 24 d 20148 Hamburg/GermanyTel: (0)40 211 078 67 Mobile:(0)160 935 213 68 Email: malte.koepke@lite-games.com Facebook: www.facebook.com/LiteGames

12-02-2016 | IT, New Media & Software
LITE Games GmbH
The LITE Games CrossPromo Program as a free support for indie developers and sta …
Hamburg, 01.12.2016 – Hamburg-based casual games publisher, LITE Games, is launching its CrossPromo program to promote new apps. This will enable indie developers and start-ups on a limited budget to launch their app and gain greater visibility in the app stores. So how does it work? LITE Games GmbH was founded in Hamburg in 2014 and focuses on the development and publishing of “casual classics” for mobile iOS and Android platforms.
04-20-2016 | IT, New Media & Software
LITE Games GmbH
LITE Games congratulates Brian McCarthy – the inventor of the popular Power Ga …
Hamburg, 04/20/2016 – On the occasion of this anniversary, we take a look at one of McCarthy’s great strategy games: The Power Game! Start from the beginning. Brian McCarthy is a pioneer. No, he’s a revolutionary! Always in search of new ways and always on the look-out for the perfect strategy game! The game should be as easy as possible and just subjected to few regulations! At the same time,
03-31-2016 | IT, New Media & Software
LITE Games GmbH
The new chess puzzle app for everyone who loves tricky chess puzzles
LITE Games releases chess puzzle app for iOS and Android. Hamburg, 31 March 2016 – Mobile games publisher LITE Games from Hamburg is releasing a chess puzzle game in cooperation with Germany's leading puzzle creator: Stefan Heine. Historically, chess puzzles go back to the Middle Ages and have been solved by countless chess players around the world since that time. The objective in a chess puzzle is to checkmate the black
03-17-2016 | IT, New Media & Software
LITE Games GmbH
Minesweeper Universe to be released for Android and iOS
The famous Windows game Minesweeper will soon be released in a completely revamped mobile version with adventure mode. Hamburg, 3/17/2016 — LITE Games ports the famous Minesweeper game concept to mobile devices. The tension is palpable in the young adventurer's face. Just one false move could set off the sticks of dynamite. Luckily, through skillful calculation, she knows where the danger lurks. She wins, gathers the valuable treasures, and moves on to