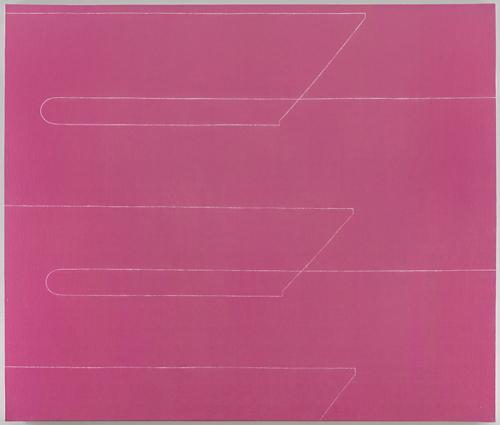 PAUL PAGK - to K from P with love Paintings and Drawings26th of October to 22th of December 2007 Opening: 26th of October 7 pmMarkus Winter is pleased to present a group of abstract paintings by New York based artist Paul Pagk. At first glance, Paul Pagk’s abstractions could be mistaken for being minimal. Their language is rooted in geometry in the sense that delicate lines embedded in flat color planes define space, suggest separate fields, and contextualize each other. It is not upon closer inspection that the intentional imperfections appear clearly before our eyes. In Pagk, thick layers of self-mixed oils are continuously built up and heavily layered in order to shape each element. Here, lines are not applied onto flat planes, hovering above in order to dissect the space. Instead, they are shaped and even sculpted by their surrounding fields of color, which close in layer by layer, not unlike high tide rolling to shore. In the defining lines’ slight crookedness, imperfection, and casual nonchalance, we can trace the artist’s hand, its craft and skill – the reflective question of what is human.While a perfectionist, Pagk embraces irregularities. He confronts them by initiating them, examining the control inherent in allowing room for the unexpected. Reminiscent of simplified architectural maps, his works can translate as well-thought-out guides, which by employing the most pure ingredients of painting - color and form – succeed in navigating the viewer’s train of thought through the compositional space. By doing this, Pagk’s work becomes experiential while a unique aesthetic lingers on the transcendentally tranquil. The mission of each structural element is to lure us deeper into the abstract reality of painting, a world that though forever bound to two-dimensionality if successful can be able to function as gateway. Pagk provides us with this option, establishing an arch between the lush physicalities of painting and the fictions we project onto them.Born in London, Paul Pagk has lived in Austria and France before moving to New York City in 1988. He has exhibited extensively in the United States, as well as Europe and works with Galerie Eric Dupont in Paris and Moti Hasson Gallery in New York. ---Stephanie BuhmannMarkus Winter, Chausseestraße 104, D- 10115 Berlin - GERMANY Tel. +49 (0) 30 97 00 46 57 Fax +49 (0)30 97 00 46 76 www.markuswinter.com For press: Bianca Limbach, presse@markuswinter.com Gallery hours: Wed – Sat 2 pm – 6 pm and by appointmentLocated in former East Berlin, Germany, Galerie Markus Winter was founded in October 2005. The gallery focuses on international contemporary painting, sculpture, photography and video art with a keen interest in conceptualism and progressive media. Therefore, the exhibition space is designed to accommodate each artist’s project without compromise (allowing for the flexible alteration of the overall architectural structure), and hence provides each artist with a highly individual forum. The yearly gallery program consists of eight to ten exhibitions, including solo exhibitions, as well as curated group shows. Since our first exhibition, which featured an installation by the acclaimed German video artist Marion Schebesta, we have supported progressive young and mid-career artists from Europe, Asia, and the United States, working in all media. These include: François Boué, Jean-Baptiste Bouvier, Jim Lee, Bryan Osburn and Matthew Abbott. In addition, we represent members of the Düsseldorf-based artist collective "Konsortium", such as Lars Breuer, Julio Ernesto Herrera Flores and Deutsche Bank award recipient Sven-Ole Frahm.