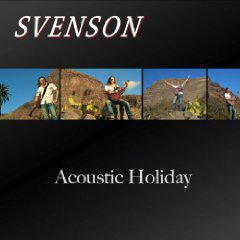 Highly acclaimed by specialised press, Svenson presented his new album „Acoustic Holiday“. Sensitive, imaginative and technically skilled leads Globetrotter Svenson his listeners in the „Acoustic Holiday“. The travel program includes the great continent (Continental Blues), South America (Samba de Gaia, In den Kordilleren) and Scandinavia (Sixtus). Also the Egyptian goddess Isis comes in a hypnotic fascinating piece (The short Journey of Isis & Re) to speak. The technical finesse of the talented musician reaches from Spanish flamenco Rasgueado (In den Kordilleren ) to play with plectrum (Melina), fingernail (Sixtus) and dome (Blues & Toccata in E Minor).Particular highlights of this album are two pieces: the groovy "T for Theia", recorded with the "German Blues Harp-Pope" Dieter Kropp and intoxicating Latin rhythms in "Samba de Gaia". Here the well-known Latin-gypsy guitarist Lulo Reinhardt enriched by his dexterity and rich sound of his Maccaferri guitar the composition of Svenson."Acoustic Holiday" consists of original compositions of the ambitious musician Svenson - a bold rarity in today's times. The only exception, and another highlight of this album is the track "Sixtus". It was written by drummer Peter Johannesson for his live performances with Herbie Hancock. His consent to these solo interpretation Johannesson was given personally and with warm words for Svenson.Acoustic Holiday - an album for those who need time out from everyday life and want music at a high level, with joy, wit and passion for the guitar.Biography:Svenson studied at the Jazz and Rockschool in Freiburg, Breisgau, Germany, which is an official partner to the Berklee College of Music in Boston, MA, U.S.A.While there he attended masterclasses and workshops given by: Pat Metheny, Joe Dioro, David Friesen, Uwe Kropinski, John Stowell, Matt Smith, Georg Gruntz and Ernie Watts.His musical work with different acts has taken him around Europe and also Israel, he performed at the MONTREUX JAZZ FESTIVAL and composed the main titles for German TV-shows and audiobooks like cable television Sat 1 and famous Karl May Verlag audiobooks.Svenson has performed at all major music trade shows around the world as an endorser for Jim Dunlop, Faridaguitar, Framus, Rodenberg amplifications and Ernie Ball Strings.With his current Solo-Show he is touring worldwide.Press:„He is equally at home whether it be rock, pop, blues and jazz. His tone is always solid, warm and at home in every musical style.“„Extremely clear and well executed.“„Svenson play the rhtym and lead guitar at once much like charlie hunter“.Svensonguitar Gaia Born presse@svensonguitar.com0049 2223 2958000www.svensonguitar.com