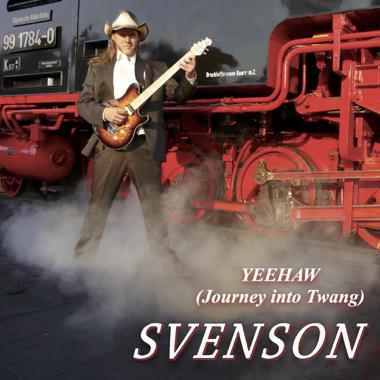 Once again, the outstanding Svenson demonstrates the rhythm in his blood. His new tribute to Western music is supported by an enviable lineup. Jerry Donahue aka 'Stringbender king of the planet' from the Hellcasters, who has performed on stage with Chris Rea, Elton John and Roy Orbison, delivers a delicate guitar solo. With a Metal background, bassist Sotirios Kelekidis from Morgoth demonstrates here a powerful versatility which comes over convincingly. Drums: The one and only Daniel Pellegrini, known as the drummer of the Balkan beat band Äl Jawala. The introduction is marked by the impressive sonerous voice of presenter Heiko Grauel. In addition to recording Karl-May audio books he appears on TV, most recently on German television ZDF's cult series Terra X. His dynamic interjections give "Yeehaw (Journey into Twang)" the right timbre.Through his appreciation of these various artists, Svenson has succeeded in blending their talents into one appealing piece.Svenson - Guitar Jerry Donahue (Elton John, Chris Rea, The Hellecasters) - Guitar Sotirios Kelekidis (Morgoth) - Bass Daniel Pellegrini (Äl Jawala) - Drums Heiko Grauel (Terra X, Karl May Hörbücher) - SpeechBlues webside critic, B´Man´s Blues Report recently reviewed one of SVENSON´s albums and commented, „He plays the rhythm and lead guitar at once much like charlie hunter“. „Extremely clear and well executed.“ This is indicative of the fact that Svenson is truly a guitarist´s guitarist. But there is more to discover. Sven Kuehbauch aka Svenson is an author, composer and instructor as well. Sven is currently teaching at the music school of the Hansestadt Stralsund. Beforehand he taught at the Beethoven music school of Bonn. He published Svenson´s Guitar workshop, a series written exclusively for the multi touch book format .iba (Apple iBooks) and available only on iBooks and iTunes. Sheet music by Svenson is available at Amazon, iTunes and Google play store. Sven performs worldwide: Bangkok, Beijing, Monte Video, Shanghai, Seoul, Stockholm... In 2011 he performed at the Montreux Jazz Festival. Svenson studied at the Jazz and Rock School in Freiburg, Breisgau, Germany, which is an official partner to the Berklee College of Music in Boston, MA, U.S.A. While there, he attended master classes and workshops given by: Scott Henderson, Greg Howe, Pat Metheny, Joe Diorio. Svenson composed the main titles for German TV-shows and audiobooks like cable television Sat 1 and famous Karl May Verlag audiobooks. Svenson has performed at all major music trade shows around the world as an endorser for Music Man, Jim Dunlop, Farida guitar, Framus, Rodenberg amplifications and Ernie Ball Strings. Sven has recorded with such greats as Jerry Donahue, Rhani Krija and Lulo Reinhardt.Svensonguitar Gaia Born presse@svensonguitar.com0049 038301 655113www.svensonguitar.com