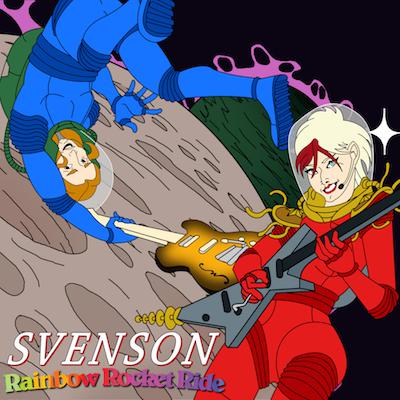 Guitar virtuoso and composer introduces new pieceJennifer Batten loves "Rainbow Rocket Ride": After a collaboration with Sven Kühbauch, the famous guitarist of Michael Jackson and Jeff Beck was so excited about his composition "Rainbow Rocket Ride" that she produced her own video for the title and plays the track in her own solo program. "It's a killer track, great sound," said Batten. January 15, 2018, the track is available for download on all common platforms. In addition, the piece is transcripted as an eBook with a backing track."Rainbow Rocket Ride" is a true ride to the stars. "These are bebop lines á la Joe Pass, fully distorted with a Peavey 6505 head and a Jim Dunlop Cry Baby," says Kuehbauch. Guitarists are likely to listen to such an announcement. But also music lovers without instrument skills get their money's worth: Memorable triads and brilliant tapping thunderstorms by Svenson and tapping goddess Jennifer Batten are ear catchy. "It was a pleasure to work with Jennifer. She is very professional and with her own style and ideas she brought this production to a whole new level" says Kuehbauch happily.For ten years, the 41-year-old rocked under his stage name Svenson. Last year, the studied and passionate guitarist showed his impressive range on his anniversary album "10th anniversary" and trumped with out-of-print titles such as "Ride away", in which the otherwise convinced instrumental artist even sings. An awarded title is "T for Theia" ("Best Instrumental Blues Song" / The Academy Music Award). The international press paid tribute to the album and guitarist by writing: "Svenson plays rhythm and lead guitar at once much like Charlie Hunter does (...) a solitary acoustic guitar well done with beautiful chords and clean articulation." (Blues Report) , "Svenson uses his expertise as a guitarist to speak to his audience. (Warlock Asylum International News) "Svenson's breadth of talent and style is evident as his brand of restrained wizardry and his ability to put the matter to the fore." „groove above all else with creativity and impeccable precision purveys the album." (Tunedloud)So much skill does not come by chance: The musician Svenson from Marburg studied at the jazz and rock school in Freiburg, which he left as the best guitarist of his class. Since 1994 he has given individual and group lessons and has gained his rich experience in masterclasses, lessons and workshops from Greg Howe, Scott Henderson, Pat Metheny, Joe Dioro, Michael Sagmeister, David Friesen, Uwe Kropinski, John Stowell, Matt Smith, Georg Gruntz and Ernie Watts. He has performed worldwide with his solo show and as a band guitarist, including shows at the Montreux Jazz Festival, and has worked with such greats as Jerry Donahue, Jennifer Batten, Lulo Reinhardt and star percussionist Rhani Krija (Sting). With the latter, who is considered a "world-class percussionist" (drums & percussion), he recorded the original composition "Agua de mundo" (2016, format: Download), which Big Fuss Records chose as an opener for the environmental compilation "Our Green Earth". His solo albums are highly praised in professional circles, not only the web radio station "Blues Road" was thrilled: "More than worth listening to. A guitarist who puts his feelings into music and miraculously serves his guitar. "But not only on the guitar Kuehbauch shows empathy and passion. Through his enthusiasm for the wild west and as an avowed Karl May fan, Kühbauch was delighted to compose and record the chapter music for six Karl May audiobooks (Karl May Verlag, Bamberg). At the request of the publisher, Kuehbauch presented his Karl May sound world to the illustrious audience of the 100th anniversary of the publishing house, where Winnetou's sister Nscho Tschi (Marie Versini) was also a guest. Kuehbauch's compositions are as catchy as credible and can be heard in various television productions (including Sat1).In workshops (published in the magazine "Gitarre & Bass" among others) and interactive eBooks, Sven Kuehbauch teaches his knowledge. His "Interactive Guitar workshop" series is considered groundbreaking and has established itself as the standard work of modern interactive guitar textbooks. "Interactive Country Guitar" is available in three languages.Rainbow Rocket Ride Teaser:https://youtu.be/PB23wAeV574iTunes:https://itunes.apple.com/de/album/rainbow-rocket-ride-jennifer-batten-thomas-foerster/1330952488www.svensonguitar.comBlues webside critic, B´Man´s Blues Report recently reviewed one of SVENSON´s albums and commented, „He plays the rhythm and lead guitar at once much like charlie hunter“. „Extremely clear and well executed.“ This is indicative of the fact that Svenson is truly a guitarist´s guitarist. But there is more to discover. Sven Kuehbauch aka Svenson is an author, composer and instructor as well. Sven is currently teaching at the music school of the Hansestadt Stralsund. Beforehand he taught at the Beethoven music school of Bonn. He published Svenson´s Guitar workshop, a series written exclusively for the multi touch book format .iba (Apple iBooks) and available only on iBooks and iTunes. Sheet music by Svenson is available at Amazon, iTunes and Google play store. Sven performs worldwide: Bangkok, Beijing, Monte Video, Shanghai, Seoul, Stockholm... In 2011 he performed at the Montreux Jazz Festival. Svenson studied at the Jazz and Rock School in Freiburg, Breisgau, Germany, which is an official partner to the Berklee College of Music in Boston, MA, U.S.A. While there, he attended master classes and workshops given by: Scott Henderson, Greg Howe, Pat Metheny, Joe Diorio. Svenson composed the main titles for German TV-shows and audiobooks like cable television Sat 1 and famous Karl May Verlag audiobooks. Svenson has performed at all major music trade shows around the world as an endorser for Music Man, Jim Dunlop, Farida guitar, Peavey, Rodenberg amplifications and Ernie Ball Strings. Sven has recorded with such greats as Jennifer Batten, Jerry Donahue, Rhani Krija and Lulo Reinhardt.Svensonguitar Gaia Born Bahnhofstr. 8 18581 Putbus 0049 038301 655113 presse@svensonguitar.com

01-07-2020 | Arts & Culture
Svensonguitar
Svenson – Glory, Death And Heroes An Epic, Cinematic Journey Into Sound
Svenson – Glory, Death and Heroes The brilliant sounds penned by Sven Kuehbauch are implemented on his fifth studio album by Jennifer Batten (Michael Jackson, Jeff Beck) and Alexander Veljanov So far, guitarist, composer, and author, Sven Kühbauch was used to sophisticated compositions for electric and acoustic guitar. With his fifth studio album, the versatile artist has now discovered brilliant cinema sounds for himself. His melodies are catchy virtuoso phrases and have
01-14-2019 | Arts & Culture
Svensonguitar
Svenson and Alexander Veljanov released single together
"Hiding from me" is the name of the new release of the exceptional guitarist Sven Kühbauch. For the song, he could win Deine-Lakaien-singer Alexander Veljanov. "His voice is epic and goes well with the guitar sound I was looking for," says Kühbauch. The song tells the story of Helios, the Greek sun god. The personification of the sun is said to have chased a four-in-hand carriage across the sky every day.
01-17-2018 | Arts & Culture
Svensonguitar
Out now: Svenson rocks with Michael Jacksons guitar player Jennifer Batten
Jennifer Batten loves "Rainbow Rocket Ride": After a collaboration with Sven Kühbauch, the famous guitarist of Michael Jackson and Jeff Beck was so excited about his composition "Rainbow Rocket Ride" that she produced her own video for the title and plays the track in her own solo program. "It's a killer track, great sound," said Batten. The track is available for download on all common platforms. In addition, the piece
03-08-2016 | Arts & Culture
Svensonguitar
Svenson's new Single "Yeehaw" feat. Jerry Donahue
Once again, the outstanding Svenson demonstrates the rhythm in his blood. His new tribute to Western music is supported by an enviable lineup. Jerry Donahue aka 'Stringbender king of the planet' from the Hellcasters, who has performed on stage with Chris Rea, Elton John and Roy Orbison, delivers a delicate guitar solo. With a Metal background, bassist Sotirios Kelekidis from Morgoth demonstrates here a powerful versatility which comes over convincingly.

07-30-2020 | Business, Economy, Finances, B …
mybreev GmbH
Sven Leidel Joins mybreev to Launch the mybreev International Partner & Broker P …
mybreev, one of the leading European providers of online training and distance learning solutions with the focus on security, safety, cyber and compliance, today announces a new key staff for further international expansion and growth. With immediate effect, Sven Leidel is responsible for the internationalization of the mybreev Group as the Managing Partner of the Global Sales Partner & Broker Program. With this expert, further access to new international markets
10-12-2017 | Fashion, Lifestyle, Trends
Sven Can See
PORTABLE OUTDOOR-CENTRIC PRODUCT RECEIVES MAJOR INDUSTRY RECOGNITION
Anti-Fog Solution, Sven Can See, Named Must-Have Gear for 2018 Holbrook, MA – Every year, outdoor enthusiasts across the country await for one particular roundup of coveted gear on the rise. That annual list is published by industry-leading Backpacker magazine, and this year, the first four season anti-fog solution of its kind, Sven Can See®, has made the cut. Renowned for its innovative spray gel that keeps eyewear fog-free all day,
08-18-2017 | Business, Economy, Finances, B …
Innoplexus
Innoplexus welcomes Dr. Sven Niedner as the Chief Operating Officer and Juergen …
Innoplexus announces the joining of two members in the leadership team, Dr. Sven Niedner as the Chief Operating Officer and Juergen Raths, MD as Life Sciences Head both effective from August 1st 2017. Dr. Gunjan Bhardwaj, Founder & CEO and Gaurav Tripathi, CTO of Innoplexus discussing about the expertise that Dr. Sven Niedner and Juergen Raths, MD would bring to Innoplexus said: "Both add experience and understanding of how companies scale
09-08-2016 | Industry, Real Estate & Constr …
Bühler Motor
Bühler Motor: Dr.-Ing. Sven Urlaub New Director of Thermomanagement Automotive …
Nuremberg, September 1, 2016 – Dr. Sven Urlaub has been named global Director of the Automotive Thermomanagement product segment of Bühler Motor GmbH effective July 1, 2016. In this position, he succeeds Mounir Kudsi, who has taken over as Vice President for the Central Research & Development division since February 1, 2016. Bühler Motor is one of the leading suppliers of innovative mechatronic drive solutions, with over 1,750 employees in 10
01-17-2012 | Arts & Culture
Light Space & Time Online Gallery
Sven Frøkjær-Jensen Now a Light Space & Time Featured Artist
Jupiter, Florida - January 16, 2012 -- Light Space & Time Online Art Gallery announced today that the Danish artist, Sven Frøkjær-Jensen was chosen for the Gallery's most recent Artist Showcase. Sven Frøkjær-Jensen has had a very thorough university education as a professional historian, which has been a great advantage for him in his love of art. He started out with a vivid and strong fascination of the Cobra art movement,
12-21-2009 | IT, New Media & Software
XING AG
Marc-Sven Kopka to be new Vice President Corporate Communications at XING
Hamburg, December 18, 2009 - Starting January 15, 2010, Marc-Sven Kopka (41) will be joining the management of the publicly listed XING AG (ISIN: DE000XNG888) as the new Vice President Corporate Communications. Mr. Kopka will report in this role directly to the CEO of XING AG, Dr. Stefan Gross-Selbeck. Before taking up his new post at XING AG, Mr. Kopka was most recently Head of Corporate Communications at WestLB AG
Comments about openPR
OpenPR ist the nicest and most clearly laid out PR platform I have seen to this day. The press releases are displayed very nicely and clearly and without any unnecessary frills. The updates are fast and the finished release looks appealing and is clearly legible. Even with 16 years of experience one discovers new things from time to time. Congratulations!
Gabriele Ketterl, Director Marketing & PR, Menads