EquityMatch.co hosts a global webinar on The Future of Fintech while embracing the adoptions of Blockchain and Crypto 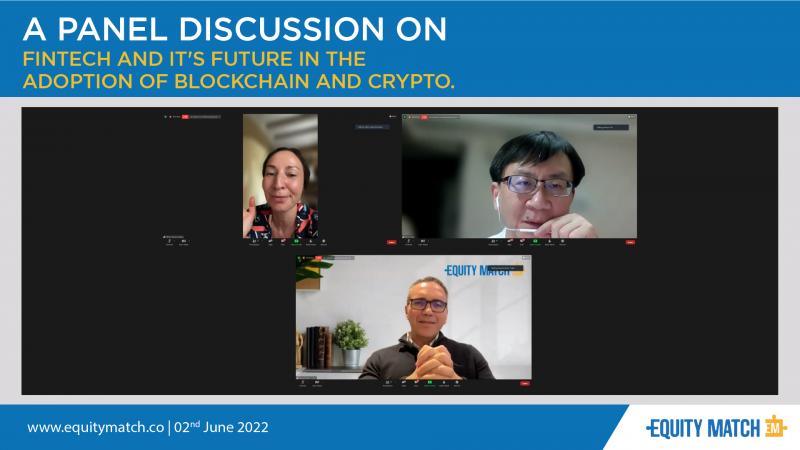 EquityMatch.co, a smart investment platform based in the United Kingdom, successfully hosted its third webinar in a series leading up to the fourth private pitching session on "Fintech and its Future in the Adoption of Blockchain and Crypto." The event was free and open to the public, and broadcast lives via Zoom. The platform also hosted a global webinar on "The Future of Fintech while embracing the adoptions of Blockchain and Crypto" on June 2nd, 2022, from 5 p.m. to 7 p.m. GMT. It provided individuals with the opportunity to present their thoughts on blockchain and centralized crypto finance. Six well-known international investors and panelists conveyed critical information about the use of blockchain and cryptocurrencies and how they have evolved. Massimiliano (Max) Sulpizi, the founder of 'EquityMatch.co' and Managing Partner of HSMI-Corporate Advisory, hosted the event. Max, who has held positions as a CEO, venture capitalist, merchant banker, and startup founder has advised clients on more than €100 million in transactions and €50 million in fundraising in the infrastructure, fashion, real estate, and technology industries. Andy Weinstein, CEO of Bottler Distribution Group, was the session's first speaker. He is well-versed in supply chain solutions, particularly how to use AI and blockchain to modernize legacy businesses. He also has 19 years of experience working in domestic and international food, beverage, janitorial, and medical supply chains. He discussed how the adoption of blockchain and cryptocurrency has changed Fintech. "People go where there is money, and there is a way to exchange capital without paying an intermediary while maintaining mathematical clarity. So, I believe that Fintech is eliminating a lot of the human elements and human trust that we have, but at the same time, it is increasing transparency," Andy said "I think fundamentally, it's about how we put more dollars into the ecosystem," he added. Panelist Aaron Tsai spoke about decentralized finance. He is the CEO and Founder of MAS Capital, Massif, MAS Pay, and MASBank. He is known for establishing 101 public shell companies in the 1990s, long before SPACs became popular. Aaron talked about how Defi provides equitable access to people in both developed and developing countries who have access to a mobile phone or the internet. "Even a child with sufficient internet proficiency can participate in global finance," he said. He also went on to explain how the new Defi system is already having a significant impact on the outdated centralized system. "Defi is rapidly evolving, forming a more secure and efficient financial service ecosystem to mirror and, I believe, eventually replace the old," he added. Ali Fidvi, an Investment Principal at Reflex Capital, another panelist with a background in private equity and venture capital investing, corporate strategy, mergers, and acquisitions, and deal advisory discussed Fintech's CeFi vs Defi, and their primary differences, strengths, and weaknesses. He began by explaining how Defi is using blockchain technology to create smart contracts that self-execute without the need for a central authority or system. "So, the key differences are no intermediaries and that the borrowers and lenders are connected directly with full transparency. Furthermore, the most important component is digital collaterals, which is again a very exciting segment due to online game assets, photos, videos, and title deeds," he said. Maria Arganovskaya, Founder and Managing Partner of M. Agranovskaya Law Fintech and Investment Regulation Advisory is also the managing partner of the Russian Bar Association GRAD and a lawyer with over 25 years of experience. She discussed the industries that stand to benefit the most from blockchain adoption during the session. She explained how, after all of the fraud projects, most people were using blockchain. "I would say that any project may benefit from blockchain, depending on the country, the legal background, what is prohibited and what is not prohibited, such as telemedicine," she said. "Of course, Fintech is the most interesting sector, but it is not the only one, and, once again, Blockchain is a game-changer, " she added. CanETH's Co-Founder and Advisor, Jorge Sebastiao, was also successful in imparting valuable knowledge. He is also the Chief Security Officer & Growth Hacking CSO-CGH at Crypto Bank and the CTO Executive Advisor at Confidential. He has also held previous positions such as CTO Eco-System at Huawei Technologies. He expressed his opinion on whether cryptocurrency is a viable means of democratizing finance. "I see blockchain as a new operating system of trust," he stated, "We are starting to see government organizations, smart cities using blockchain and it plays as an enabling factor. It's a very small element, but it's an important one. It's a glue that connects all the dots together." He also went on to explain how blockchain can be thought of as a loose combination of AI. Another panelist was Artur Oganov, an Investment Associate at Docet TI. He has been working in finance since 2011, and he now leads investments and finance at Docet TI, an AI/ML-focused Venture Studio based in Israel. As a member of the top management team, he is heavily involved in business strategy and growth. He was able to express his thoughts on whether mining will be sustainable in the future during the session. He stated, "For one side it's a yes and there is hope that this is possible. But, on the other hand, some things need to be changed and adjusted in order for this to happen." The webinar was successful in disseminating useful information about Fintech and its future in the adoption of blockchain and cryptocurrency. EquityMatch.co has similar events planned for 2022. Participants will also discover how to sign up for a free membership with EquityMatch.co, which provides them with direct access to investors as well as marketing and promotion opportunities. To get involved and learn more about upcoming webinars and events, visit EquityMatch.co's social media platforms (LinkedIn, Facebook, and Twitter) and website www.equitymatch.co. EquityMatch.co, 38 Craven St, London WC2N 5NG, United Kingdom teamsl@equitymatch.co A platform where Startups can simply and effectively search for the right investor at an affordable price.

You can edit or delete your press release EquityMatch.co hosts a global webinar on The Future of Fintech while embracing the adoptions of Blockchain and Crypto here