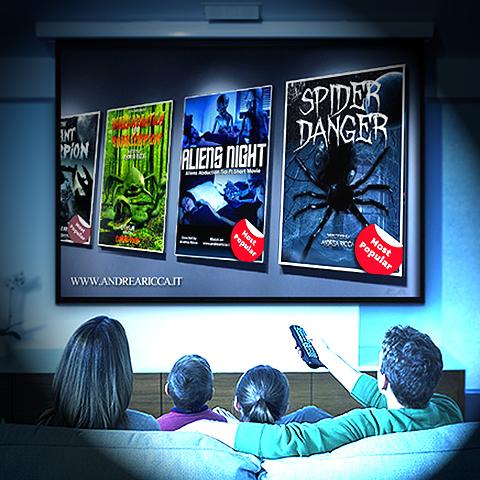 Cinema News. A cinematic case? Andrea Ricca's films: From independent cinema to 40 million views online, from international reviews to publication on Amazon Prime Video in the USA.A new collection of science fiction and adventure films, with special effects in 3D computer graphics (CGI VFX), by director Andrea Ricca (in business since 1998), is now available on Amazon Prime Video (US and UK) with the subscription, and for free viewing on the Official Website: http://www.andrearicca.it/The films received positive reviews from the international press, surpassing forty million views online.They talked about it: Radiotimes Magazine, Starburst Magazine, Rue Morgue Magazine, Scream Horror Magazine, Dread Central, Fansided, Horror Movies Ca, Gorezone, Horror Society, Horror Fix, Bloody Disgusting, Sfx Magazine, Film Threat, Horror Fuel, Horror Fix, Cinema Go, Film News UK, Ecran Fantastique, Horror News, Gruesome Magazine, Film Carnage, Daily Dead, Horror Cult Films, Horror Experts, Nightmare on Film Street, Joblo Movie Network, Trailer Addict and many more.Here are some of the international film festivals in which they have been selected in competition: Fantafestival, Miami Film Festival, Vienna Film Festival, Los Angeles Cine Fest, Texas Terror Film Festival, International Fantastic Film Festival, Cleveland Comic Con, Linea D'Ombra Film Festival, Horror Con Uk (Dario Argento in the jury) etc.Filled with emotion and action, these films tell stories of fantastic events that disrupt the tranquility of ordinary people forced to fight for their lives. Alien invasions, fantastic monsters and paranormal events. Featuring live actors interacting with computer-generated creatures, these films are inspired by classic and modern science fiction."There is an energy and an exuberance to these films that it is impossible not to get involved". STARBURST MAGAZINE"Full of excitement and action, you can really enjoy these movies." RUE MORGUE MAGAZINE"The movies are really cool and feature awesome CGI monsters." SCREAM HORROR MAGAZINE"These films represent something unique in the cinema for the theme of science fiction and for the great use of computer graphics. Wonder, adventure, emotion mix with everyday reality. " CIAK MAGAZINE"With millions of online views, dozens of films to his credit and a passion for cinema, science fiction and thriller director Andrea Ricca has become a web star. His impactful films have captivated internet users and international magazines, giving young actors the opportunity to take their first steps in cinema. Ricca, who started in 1998, has seen large numbers arrive that are leading him to become known all over the world ". THE MORNINGMOVIESOne of the most popular films is titled: "ALIENS NIGHT" and tells of an alien spaceship that arrives on earth near the house where a young biologist lives. Little gray aliens descend from the spaceship and enter her house, a real alien invasion! These classic big-headed aliens want to kidnap her, but the girl, after an initial moment of terror, decides to fight back and fight for her life. What will happen? There is certainly a pinch of humor but above all an unexpected surprise at the end! Los Angeles CineFest Finalist.The second most viewed film by the public is titled: "SPIDER DANGER". Due to the fall of a meteorite, a small spider, kept in a glass case by a collector, becomes a giant and begins to hunt down its master. The house is full of cobwebs and spider eggs that will hatch, causing an invasion of arachnids!For those who love the paranormal, however, we find: "THE AMULET OF FEAR", a tribute to horror in the style of Stephen King. In an old house a young girl finds an ancient amulet that has the magical property of making real the fears of its owner and when the girl begins to read a horror book by Stephen King entitled: "The Creature" it comes to life. and begins to hunt her down. The danger is imminent and not even the shots of a gun will be able to stop the monstrous creature (completely made on the computer in 3D graphics) for this reason the protagonist will have to use all her wits to overcome her nemesis. Between emotions and action.The most critically acclaimed film is entitled: "THE GIANT SCORPION" which attracted over 2 million viewers online, being selected by many Film Festivals and receiving international reviews. "There is an energy and exuberance in the film that it's impossible not to get involved with." Starburst Magazine. "What's better than a beautiful girl sleeping softly under an 80s issue of" Fangoria "magazine and battling monsters with a sharp blade?" Horror News.Watch all the movies on Amazon Prime Video, free with membership (https://amzn.to/3CQnDmS), or completely free on the site: http://www.andrearicca.it/Get in touch with the director Andrea Ricca on his social networks: https://www.instagram.com/andreariccamoviedirector/ https://www.facebook.com/andrea.ricca.161/Andrea Ricca via 8 settmbre 15 soccorso - fisciano - salerno - italyFree streaming films by director Andrea Ricca

05-18-2020 | Arts & Culture
BookBuzz.net
Author Brooklyn Ann Releases New Horror Novel - His Scream Queen
Author Brooklyn Ann Releases New Horror Novel - His Scream Queen Author Brooklyn Ann is pleased to announce the release of the third book in her B Mine horror series, His Scream Queen. Released in April 2020, by Boroughs Publishing Group the book is already receiving rave reviews from readers and reviewers. QUEEN FOR A NIGHT When Lucio Argento is dumped by Amteep High's most popular girl, he plots revenge in a
01-07-2019 | Leisure, Entertainment, Miscel …
HAN Pictures and Media Corp
HAN Pictures and Media Announces A New Horror Movie Production
HAN Pictures and Media Announces A New Horror Movie Production PRESS RELEASE - January 6, 2019 HAN Pictures and Media Corp based in USA and China announces a new horror movie production called "Darkness Awaits" in its pipeline. New York City, January 6, 2019 - New York City/Los Angeles/ Shanghai/ Beijing HAN Pictures and Media Corp announces a new horror movie production called "Darkness Awaits". The initial production budget is set with about
10-02-2017 | Arts & Culture
New Generation Publishing
Horror novel “Raven Hill” by Richard D. Cooper is published
ISBN #978-1910394762 Horror novel “Raven Hill” by Richard D. Cooper is published A tranquil town is slowly being ravaged by an unspeakable evil About the Book: Recently widowed, plagued with insomnia, Jeff Hanks is a man teetering on the brink. The sleepy community of Raven, nestled comfortably on Bodmin Moor, Cornwall, is subjected to a terrifying storm that awakens a slumbering malignant nightmare. Jeff Hanks seeks out the welcoming tranquility of Raven, hoping
11-07-2016 | Leisure, Entertainment, Miscel …
Zorba Books
Two 13-year-old Australian Girls Pen a Horror Book
Zorba Books publishes a new book Dana. The fiction book is written by two highly accomplished 13-year-old girls based in Australia Eesha and Avanisha. They are following in Paolini steps who set the ball rolling for children writing books, with his first book Eragon. The title of the book by the girls is innocuous enough – Dana, but it belies what lies inside – horror and mystery. Gurgaon, Delhi, November 04,
12-19-2012 | Arts & Culture
Horror News Network
2012 Horror Comic Awards
For Immediate Release: 2012 Horror Comic Awards Are Here It's that time of year again! Time for the original fan based awards dedicated solely to HORROR COMICS. The 2012 ComicMonsters.com Horror Comic Awards are back. Our staff of horror comic experts selected their top picks for 2012, and now it's time for YOU, the fans to vote for the best. Voting is open from December 19, 2012 – December 30,
08-29-2011 | Leisure, Entertainment, Miscel …
c/o Sunbury Press, Inc.
Blues Musician Horror Author Thomas Malafarina's Short Story Collection "Gallery …
Blues musician Thomas Malafarina is a man of many talents. When not writing songs and creating music, he gives rein to a darker side. Malafarina is also a horror author. He has recently released his second collection of self-penned horror stories on Sunbury Press, Inc. Entitled Gallery of Horror, this collection will scare you to death--literally. Camp Hill, PA, August 29, 2011 -- Sunbury Press has released Thomas M. Malafarina's
Comments about openPR
OpenPR ist the nicest and most clearly laid out PR platform I have seen to this day. The press releases are displayed very nicely and clearly and without any unnecessary frills. The updates are fast and the finished release looks appealing and is clearly legible. Even with 16 years of experience one discovers new things from time to time. Congratulations!
Gabriele Ketterl, Director Marketing & PR, Menads