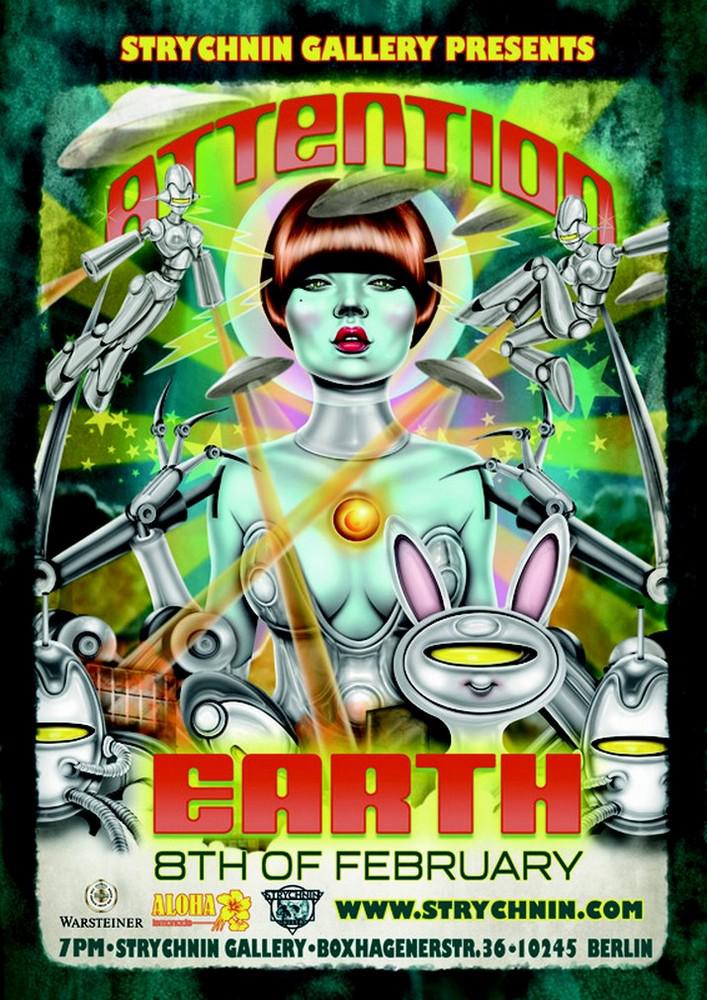 It’s the year 2013, if you’re reading this Earth has shockingly survived the Mayan prediction and prophetic date of December 21st, 2012. Since this is being written in the past, it’s not certain what has happened to humankind. Did Earth collide with planet X? Or was the cataclysm of 2012 a positive physical and/or spiritual transformation for humanity. Be as it may, hopefully this day will mark the beginning of a new exciting era.

Appropriately, the Strychnin Gallery thought about the possible consequences of this event and concluded that an advisory show must be made: ATTENTION EARTH! A show that presents viewers what is yet to happen or what has already come…

Strychnin Gallery wanted to pay tribute to one of our favorite apocalyptic forecasts; the extraterrestrial invasion! The year 2013 celebrates the 60th anniversary of two 1950’s sci-fi classics: H.G. Well’s War of the Worlds and Invaders from Mars. An artistical and aesthetic admiration that only this era and genre can boast about are their iconic poster artwork. Put two and two together and so was born a show that will immortalize not only the making of these films, but also the following of all sci-fi and space life believers.

Opened in 2002, Strychnin Berlin—like its sister galleries in NYC and London—concentrates its curatorial efforts on young, emerging artists whose work ranges from fantastic realism and pop surrealism to lowbrow, but who have not yet been categorized under trendy art world monikers. The diversity of the artists is mirrored in their choice of media, with paintings and photographs sharing the gallery space with sculpture and installations.
The gallery participates in international art fairs such as Bridge Art Fair, Liste Cologne, and Art Fair 21, which appointed Young to its selection committee in 2008. In keeping with the vision of its founder, Strychnin not only emphasizes the individuality of its artists but also seeks to strengthen ties with Berlin’s creative community, often arranging for local DJs and musicians to liven up vernissages.

You can edit or delete your press release ATTENTION EARTH! here

09-04-2013 | Arts & Culture
Strychnin Gallery
Nephelococcygia/// Cloud Cuckoo Land /// Solo Exhibition by David Hochbaum
In Aristophanes’ comedy “The Birds,” an imaginary city built in the clouds by birds at the instigation of two Athenians represented both a fantastic caricature of Athens in the poet's day and a sort of Philistine Utopia: full of gross enjoyments, hence, in literary allusion, cloudland- “fools' paradise”. A fools paradise in the clouds- is that where we’re going when we search the clouds for familiar objects? This action, coined precisely
02-20-2013 | Arts & Culture
Strychnin Gallery
Strychnin Gallery presents: "Those Whoe Dream by Day", A Visual Journey Inspired …
“Those who dream by day”, opening doors on the 15th of March at Strychnin Gallery, celebrates the imagination and oeuvres of the great Edgar Allan Poe. The mysterious man, whose life was short and filled with tragedy, left behind one of the most admired, questioned and influential literary body of works. While alive, his writings were ostracized and put under heavy scrutiny; many denied reading his publications. However, the public did yet
11-29-2012 | Arts & Culture
Strychnin Gallery
METROPOLITAN
„Christian is a global ambassador for LOVE, he takes his heart and pours it into everything he does.“ -Shaney Jo Darden / Founder Global CEO / The Keep A Breast Foundation / Los Angeles As the year comes to an end, Strychnin Gallery saved the month of Decemeber for a special exhibition, Metropolitan. Metropolitan is an important rendition of today’s developement. With the passing of each moon, we become
10-14-2009 | Arts & Culture
Strychnin Gallery
Magistrates. A group show featuring international pop-surrealist artists. Also s …
Magistrates features Ray Caesar, Michael Forbes, Chet Zar, David Hochbaum, Guillermo Rigattieri, Cliff Wallace, Tim Roosen, Dean Flemming, C.C. Askew, Luis Lorenzana, Mikael Alacoque, Jon Jaylo, Marco Rea, Michael Page, Manuel Cortez, Jason Limon, Ali Eckert, Chase Tafoya, Scott Altmann, Jaimes Zacarias, Bruce Mitchell, Steven Daily, Raf Veulemans, François Escalmel, Donato Giancola, Richard Kirk and others. Opens November 13th at 7 pm. Magistrates features over 25 internationally renowned artists such