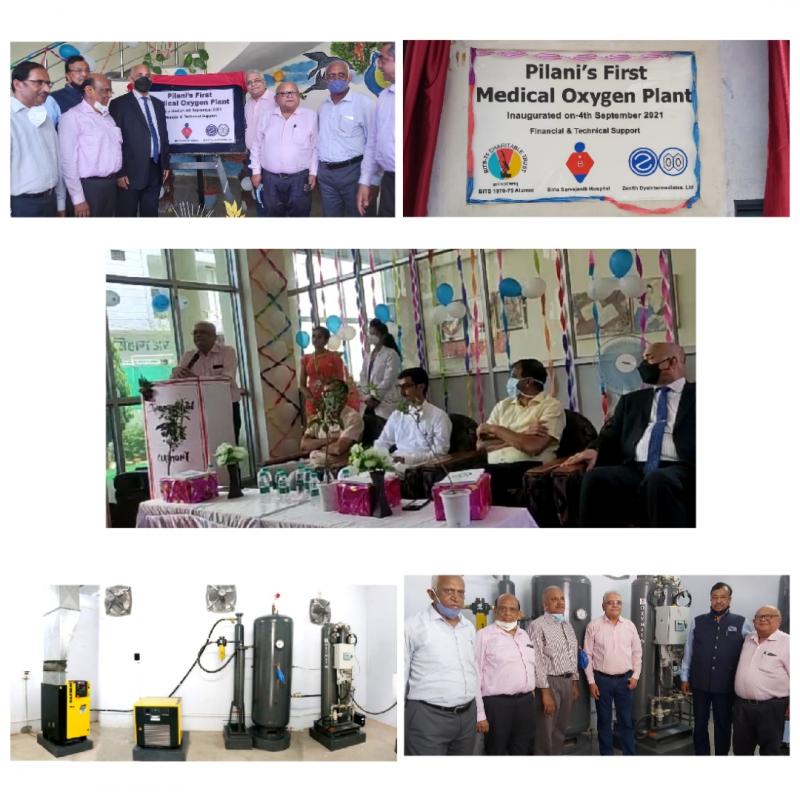 The good deeds done by the BITS-75 Charitable Trust formed by the 70-75 batch alumni of institution of eminence Birla Institute of Technology and Science – BITS Pilani is folklore among alumni movements across the world especially on Teachers’ Day celebrations. They raised a whopping INR 15 million from their batchmates to honour 45 faculty members who were faculty during their student days under the now famous Guru Dakshina Program. They have also seed funded several startups put up by BITSians. In the month of April 2021 during second wave, the Alumni of 70-75 batch of BITS, heard about plight of Pilani citizens due to lack of oxygen leading to hardship and deaths. They simply could not bear that and instantly decided to do something to address it so that no one in future ever suffers in Pilani for lack of oxygen. They as a batch decided to donate an oxygen generation plant to their beloved town of Pilani. They made an offer for the same to Birla Sarvajanik Hospital Pilani Rajasthan who not only accepted their offer but graciously offered to partly share the cost. Raising funds had never been a problem and within a matter of few days required funds were raised from 70-75 batch mates through BITS75 Charitable Trust. They wanted world’s best technology for this plant. Fortunately, one of their batch mates is a leading expert in supplying oxygen plants with 45 years of experience. The technology for this plant has been provided by Oxymat Denmark who are word’s most reputed plant supplier. The core generator has been imported from Oxymat and total project has been executed by Airgases Projects Kolkata who will also take care of comprehensive maintenance of the plant including all spares as required for one full year. During this period staff of hospital will be trained in operation and maintenance. Plant capacity is equivalent to 25 Cylinder consumption per day. They also wanted to set up this plant as quick as possible. The order was placed with target of commissioning of plant by end august. To expedite the completion schedule generator was air freighted from Denmark. With the dynamic Arun Kumar of BITS 70-75 batch spearheading as Project Manager monitoring of the project progress was done every week. Other experts from the batch in the Project team included passion packed Hanuman Bengani, Jayant Sogani and Kishan Rungta. BKBIET Pilani extended guidance for civil and related works at the hospital. As a result of all this they were able to complete the project 15 days ahead of schedule despite difficulties everyone is facing on account of pandemic and lockdowns. Today the 04 Sep 2021 is indeed a milestone for Pilani which sees the dream fulfilment of BITS Pilani 70-75 Batch who are confident that for next 10-15 years no one will ever suffer in town of Pilani for want of oxygen. In a colourful function organized at the hospital premises the plant was inaugurated with Proud to be BITSian Arun Kumar delivering nothing short of a Gettysburg address. The diginatries who graced the occasion included District Collector (DM) Umardeen Khan, CMO of the hospital Dr Rakesh Jain, Madhusudan Malani Director of Health & Community Welfare, Shri Viplav Neola Women Empowerment officer, Prof Prasanna Kumar from BKBIET Pilani, from BITS Pilani Prof RN Saha Acting Vice Chancellor, Prof Barai Director, Prof SK Verma Dean Administration and Prof Rajeev Sakhuja Associate Deal Alumni Relations. The plant uses state of the art pressure swing adsorption technology to produce oxygen meeting purity requirement as set in Indian pharmacopeia. The plant will directly feed oxygen into hospital pipeline and produce oxygen based on hospital demand. The inaugurated plant will offer many advantages to the hospital such as Significant reduction in cost of oxygen which will be around one fourth of current market cost per cubic meter, Reliability of supply special in times of Pandemic, No more dependency on gas suppliers, Fully automatic plant controlled by PLC and Plant will produce just what is needed as it automatically modulates as per demand. Further advantages of the plant include that there will be no more hassles of manual handling of cylinders requiring several people which is big problem specially at times of pandemic, it is a significantly safer option, No fire hazard like in cylinders, Zero loss technology compared to 10% gas loss in cylinder based operations and Monitoring of purity is done on real-time basis on panel eliminating dependency on supplier certificate. Pilani is indeed magi because even after 50 years the name Pilani runs in the alumni of BITS Pilani 70-75 batch blood. So much so that even at their ripe senior citizen age and in corona times several of them namely Dinesh Sharma , Arun Kumar, Ashok Sikka, Kishan Rungta, Shrikant Agarwal and Raj Kumar Kedia travelled from all over India, just to attend this function. Kuchh to baat hai Pilani ki phijaon me!! For more on BITSAA see https://www.bitsaa.org/ Prof BR Natarajan BITS Pilani Alumnus C/o Jamuna Mishra Academy – JMA Pilani, Rajasthan India 333031 Phone: +91-9799476406 Email: brnatarajan@bitsaa.org Website: https://www.bitsaa.org About BITSAA: BITS Alumni Association (BITSAA) has emerged as one of the strongest alumni networks of any university. BITSAA International engages in charitable and educational activities by raising funds for setting up endowments, creating scholarships, rewarding teaching and research and generally promoting the development of resources at Birla Institute of Technology and Science at Pilani, Dubai, Goa & Hyderabad campuses. BITSAA International also aims to strengthen the ties, friendship and communication amongst former students, alumni faculty and friends of the Institute. BITSAA International provides a number of channels for people to stay connected with each other and with Birla Institute of Technology & Science. Notable other alumni initiatives for BITS Pilani include Prof SSR Memorial Teaching Excellence Award, Atma Nirbara multi crore Pilani Resource Centre by 75-80 batch alumni, Prashant Anuradha Palakurthi Research Endowment and many more. For more on BITSAA see https://www.bitsaa.org

10-13-2021 | Science & Education
BITSAA - BITS Pilani Alumni Association
16 Days to UN COP26 BITS Pilani Alumnus George Jacob Leads $600 Million Global C …
The International Day for Disaster Risk Reduction observed on 13 October every year is an opportunity to acknowledge the progress being made toward reducing disaster risk and losses in lives, livelihoods and health. The 2021 edition focuses on “International cooperation for developing countries to reduce their disaster risk and disaster losses.” This is the sixth of the Sendai Seven targets. The year 2021 promises to be a make-or-break year
09-20-2021 | Arts & Culture
BITSAA - BITS Pilani Alumni Association
Vishwa Hindi Samman Recipient Proud to be BITSian Anoop Bhargava Alumnus of BITS …
To quote English poet, literary critic, philosopher Samuel Taylor Coleridge “Language is the armory of the human mind, and at once contains the trophies of its past and the weapons of its future conquests” No one has doubt that language indeed shapes the way we think and determines what we can think about. It was on 14 September 1949, the Constitution-makers of India decided to accord the status of Official
08-13-2021 | Associations & Organizations
BITSAA - BITS Pilani Alumni Association
Silicon Valley Techie Proud to be BITSian Suresh Brings Light from Darkness in h …
For a boy and girl to fall in love and get married, all that is required is two hearts. But society at large throws in Religion, Caste, Sub Caste, Gotra, Social status, horoscope and what more not as a spanner. Today the young generation cross oceans, fly high skies to reach and explore foreign land in search of material wealth. The hurdles due to the spanner thrown, have got minimized
08-12-2021 | Associations & Organizations
BITSAA - BITS Pilani Alumni Association
Alumni of BITS Pilani at BITSAA Dublin Chapter Celebrate BITSian Day 2021
For the alumni of the institution of eminence Birla Institute of Technology – BITS Pilani spread across various continents, the first Friday of August every year along with the accompanying weekend is BITSian Day celebrations. Each one of them is undoubtedly a dreamer performer and achiever. With Passion Quotient for alma mater peaking, for each one of them, Pilani is just not a destination at which one arrives but rather