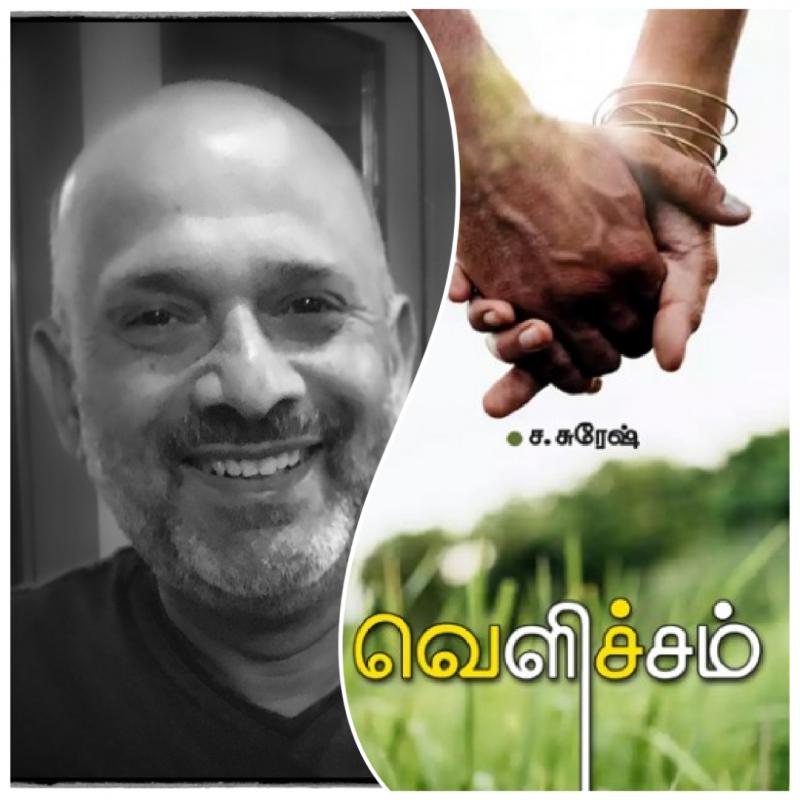 For a boy and girl to fall in love and get married, all that is required is two hearts. But society at large throws in Religion, Caste, Sub Caste, Gotra, Social status, horoscope and what more not as a spanner. Today the young generation cross oceans, fly high skies to reach and explore foreign land in search of material wealth. The hurdles due to the spanner thrown, have got minimized if not fully eliminated. But still, what remedy has happened to the conscience of humans? Can the fate driven events be overcome by large hearted individuals to replace the bitterness by sweetness? The love story set in the twin cities Secunderabad and Hyderabad, with interesting twists and turns involving a girl Trisha who is a Hindu from an extremely conservative Brahmin Iyengar family and Adil from a Shia Muslim family, this novel Velicham by Suresh indeed throws a bright light. In early 80s, starting with Pascal and then using Fortran, Basic, COBOL etal and then mastering C, C++, Java, Forth and many more low level assembly languages, when it came to writing a novel, Suresh decided to do it in Tamil. But why? He says “After a 40-year break (from writing in Tamil), I had always wondered if I could ever regain the skills that I possessed when I was young. Last year (2020), I challenged myself to see if I could get back to writing in Tamil." Writing has always been his passion, even from a young age. In late 1980s, he had written a couple of satirical pieces about Telugu Demigod Nandamuri Taraka Rama Rao - NTR that was published in Deccan Chronicle which offered him a job as a journalist. One must wonder how his life would've turned out had he accepted it. When people ask him if he is retired, he responds “I am no longer profitably employed.” I am fortunate to follow my heart for the last several years since 2015. I went back to writing, my first passion. Started writing on socio-economic and political issues about the US and the world at large, got published in Fair Observer (have published 40+ articles.” With Suresh holding a double Masters MSc(Tech) Computer Science and MSc (Hons) Chemistry from Institution of Excellence Birla Institute of Technology and Science – BITS Pilani there has to be a Pilani connection in his story and In Velicham, the boy goes to BITS Pilani for his education. He strongly feels that Human beings develop biases since very young age and life circumstances reinforce them. Religious bias has a propensity to develop into irrational hatred. It requires a strong will, honest introspection and serendipitous events for people to shift their deep-seated religious biases. He decided to tackle this difficult subject in his first novel. Personally, he is not a reader of romantic novels still he decided to surprise himself choosing a romance theme for his debut novel. Suresh has held leadership roles at Informatica, Redwood City, California and till date has four patents to his credit. Now, he is a passion packed writer, avid hiker, dog lover (His pet Apollo), amateur actor and environmentally conscious citizen. He spends part-time as a Standardized Patient in Stanford University School of Medicine, volunteer at The Health Trust, a nonprofit that works towards building health equity in Silicon Valley, and serves as a Board of Director in California Partnership to End Domestic Violence. In his opinion, many youngsters spend a lifetime chasing the greenback $ with a backpack and not following their true passion. He himself feels guilty of that until one fine day, he realized that it is possible to quit the rat-race and do what is meaningful to him. For anyone who feels stuck, he says “if you know your true calling / passion, if you can be satisfied with what you possess, if you can define your identity that is not tied to your work, then you too can do what I was able to do. In my case, I was fortunate enough to come to that realization a decade ago, before I was 50. And am grateful for the personally rewarding journey the last 10+ years. His life partner Jaya who has stood by him like the rock of Gibraltar has been his advisor, critic, care taker and he gives all credit to her for transforming him to pursue his passion. He is currently working on a short story collection, also in Tamil, and hope to have it done by end of this year. Today which happens to be Friday the 13th 2021 is his 58th birthday and with a mischievous smile he says Picture abhi baaki hai mere dost !! and gets ready to cut the cake and read the reviews which have been pouring from all parts of the world.The novel Velicam has been brought out by Sandhya Publications, No. 77, 53rd Street, Ashok Nagar, Chennai – 600083 Tamilnadu India Phone +91 44 24896979 Mobile: +91 98411 91397 and to get your copy click http://sandhyapublications.com/index.php?route=product/product&product_id=616Prof BR Natarajan BITS Pilani Alumnus C/o Jamuna Mishra Academy – JMA Pilani, Rajasthan India 333031 Phone: +91-9799476406 Email: brnatarajan@bitsaa.orgAbout BITSAA: BITS Alumni Association (BITSAA) has emerged as one of the strongest alumni networks of any university. BITSAA International engages in charitable and educational activities by raising funds for setting up endowments, creating scholarships, rewarding teaching and research and generally promoting the development of resources at Birla Institute of Technology and Science at Pilani, Dubai, Goa & Hyderabad campuses. BITSAA International also aims to strengthen the ties, friendship and communication amongst former students, alumni faculty and friends of the Institute. BITSAA International provides a number of channels for people to stay connected with each other and with Birla Institute of Technology & Science. Notable other alumni initiatives for BITS Pilani include Prof SSR Memorial Teaching Excellence Award, Atma Nirbara multi crore Pilani Resource Centre by 75-80 batch alumni, Prashant Anuradha Palakurthi Research Endowment and many more. For more on BITSAA see https://www.bitsaa.org

12-19-2022 | Science & Education
BITSAA - BITS Pilani Alumni Association
Alumnus of BITS Pilani Proud to be BITSian Dr Ravi Muppirala Alien of Extraordin …
NSTS Scholar Ravi completed his BE (Hons) Chemical and MSc (Hons) Chemistry in 1982 and got his PhD from TIFR Mumbai in 1988. His Ph.D. thesis won Geeta Udgoankar best thesis award in TIFR He has made Seminal contributions in Biophysics using NMR as a tool to study structure and Dynamics of DNA & Proteins. He held academic positions at Carnegie-Mellon, Syracuse and University of Michigan. His work is highly
10-13-2021 | Science & Education
BITSAA - BITS Pilani Alumni Association
16 Days to UN COP26 BITS Pilani Alumnus George Jacob Leads $600 Million Global C …
The International Day for Disaster Risk Reduction observed on 13 October every year is an opportunity to acknowledge the progress being made toward reducing disaster risk and losses in lives, livelihoods and health. The 2021 edition focuses on “International cooperation for developing countries to reduce their disaster risk and disaster losses.” This is the sixth of the Sendai Seven targets. The year 2021 promises to be a make-or-break year
09-20-2021 | Arts & Culture
BITSAA - BITS Pilani Alumni Association
Vishwa Hindi Samman Recipient Proud to be BITSian Anoop Bhargava Alumnus of BITS …
To quote English poet, literary critic, philosopher Samuel Taylor Coleridge “Language is the armory of the human mind, and at once contains the trophies of its past and the weapons of its future conquests” No one has doubt that language indeed shapes the way we think and determines what we can think about. It was on 14 September 1949, the Constitution-makers of India decided to accord the status of Official
09-04-2021 | Health & Medicine
BITSAA - BITS Pilani Alumni Association
Gurudakshina Fame BITS Pilani 70-75 Batch Funded Medical Oxygen Plant Inaugurate …
The good deeds done by the BITS-75 Charitable Trust formed by the 70-75 batch alumni of institution of eminence Birla Institute of Technology and Science – BITS Pilani is folklore among alumni movements across the world especially on Teachers’ Day celebrations. They raised a whopping INR 15 million from their batchmates to honour 45 faculty members who were faculty during their student days under the now famous Guru Dakshina Program.

04-19-2022 | Advertising, Media Consulting, …
SME Futures
SME on Cloud Leadership Yatra- Tamil Nadu
SME on Cloud is a platform that will highlight, evangelize, and amplify cloud adoption across Indian SMEs that have gone beyond the web to radically improve their operations and push the boundaries of the businesses. This platform aims to spread awareness about such digital transformation initiatives led by our resilient SME leaders in the wake of the recent disruptions, especially since the COVID-19 pandemic struck and changed the world forever.
07-12-2021 | Industry, Real Estate & Constr …
Digpu
TEEMAGE PRECAST BUILDERS IN TAMIL NADU
Teemage Sets New World Record by Constructing a Hospital in 45 Days Tamil Nadu, India: Not Many People know that the recently constructed building for the Government Erode Medical College and Hospitals in Erode District, Tamil Nadu was completed in just 45 days using precast concrete technology, the construction commenced on May 18 and Completed on July 1 2021. Despite the pandemic situation and lockdown, the district administration has permitted the
10-23-2020 | Business, Economy, Finances, B …
Remitbee Inc
Sinhala and Tamil Languages Now Supported on Remitbee's Website
We are always updating and upgrading the Remitbee Online Money Transfer App and website. We have the pleasure of serving clients from all over the world because of this, accessibility to our service is one of our biggest concerns! We are pleased to announce that we have added Tamil and Sinhala language options for those visiting our site. Sinhalese and Tamil are the two official languages of Sri Lanka. If you’d
10-11-2018 | Media & Telecommunications
Shamanpictures
New Upcoming Tamil Movie "Thorati"
THORATI : THE UNTOLD STORY BEHIND THE LIVES OF SHEPHERDS Creating a real connection between viewers and characters in a story is the key to the successful film. When a viewer feels empathy and emotional vibes with a character,they are more likely to let the movie inspire them.In that way, Thorati captures the untold story behind the lifestyle of shepherds and sheep rearing culture. The real life incident happened in 1980’s
07-27-2018 | Advertising, Media Consulting, …
Bhasha Bharati Arts - Translation Services in India
Hire professional Tamil Translators for authentic translation
When you think about Indian regional languages, there are hundreds of such having different accent, lingos, cultural affect and tone. To translate any document from English to any of these Indian languages, you need a professional service. The same is with the Tamil translation. Tamil, a Dravidian language is the official language of Tamil Nadu, Puducherry and some parts of Andaman and Nicobar. It is the official language of Singapore
06-22-2017 | Sports
webindia
Sports News in Tamil
Kamran Akmal-Gautam Gambhir: Gautam Gambhir is known to play his cricket with passion. India-Pakistan games are often high on passion and intensity. The occassion was the 2010 Asia Cup semifinal, and another high voltage India Pakistan clash was on the cards. Akmal made a loud appeal for caught behind which Gambhir didnt like, and the two players had a go at each other. Then, drinks break was announced, and both the
Comments about openPR
OpenPR is clearly structured and remains true to its principle of confining itself to the essential parts. OpenPR has proven to be a very good and reliable partner to our media agency: Within the shortest time the releases are online and go down well with the media representatives. The success of OpenPR is reflected in the steadily increasing number of press releases. It is good that OpenPR exists!
Ursula Koslik, Director Marketing & PR, F+W Hamburg