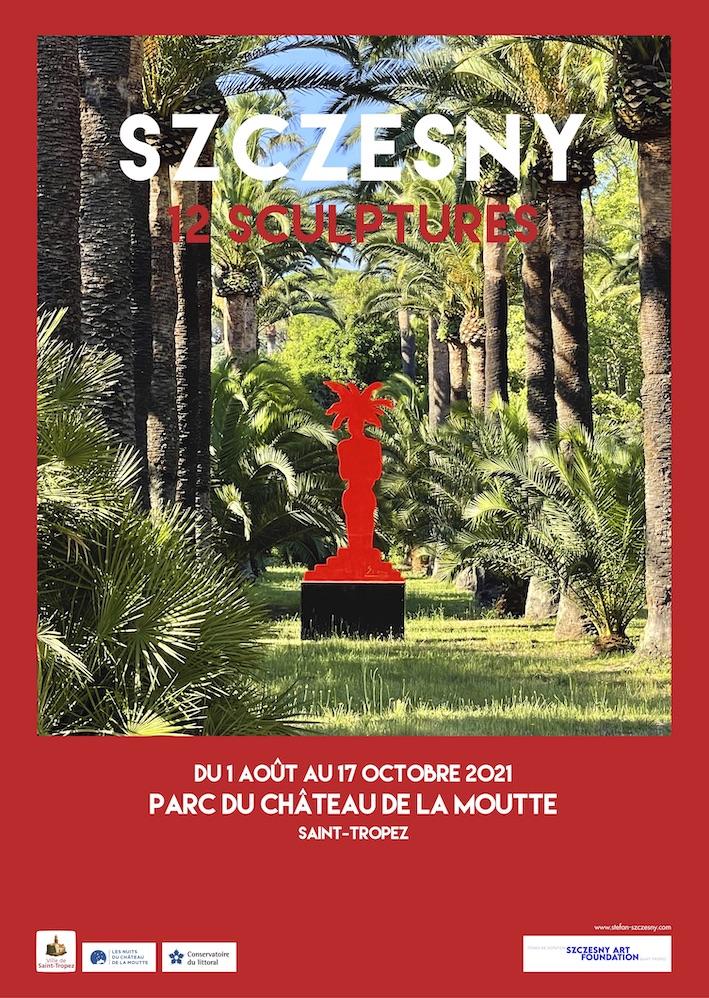 Established in 2020, the Szczesny Art Foundation Endowment Fund holds its first Exhibition at the Château de la Moutte Park in Saint-Tropez, an estate which had been purchased in 1860 by Émile Ollivier, Napoleon III’s Prime Minister, for his wife Blandine Liszt, the famous composer’s daughter, and also the sister of Richard Wagner’s own wife. Belonging to the Conservatoire du Littoral since 1999, following the settlement of the House and Park by Madame Troisier de Diaz – Emile Ollivier’s granddaughter -, the La Moutte Estate holds each year the prestigious « Nuits du Château de la Moutte » music Festival. The Park is also renowned for its luxuriant vegetation, notably including a remarkable Phoenix tree palm grove, magnolias, as well as bald cypresses, which were planted during the second half of the 19th century. It is in this Garden of Eden that Stefan Szczesny, an internationally renowned European Artist, presents twelve coloured sculptures, between August 1 – October 17, 2021. Created in a similar environment, quite near the La Moutte estate, in the plastic Artist’s own studio, or Atelier des Salins – itself anchored in a tropical garden – his monumental steel Femmes-fleurs, Bacchante and Odalisque merge admirably within the Château de la Moutte Park. For to Stefan Szczesny nature cannot be separated from his creation process ; his plastic language hinges around it. Thus his Femmes-fleurs are an invitation to contemplation, and to a dialogue with the history of this unique place, and with the generous environment which houses them for the summer.This unique event, as held in collaboration with the « Les Nuits du Château de la Moutte » Festival, the Conservatoire du Littoral and the City of Saint-Tropez, is the first Exhibition by the Szczesny Art Foundation Saint-Tropez Endowment Fund. Its major aim is to publicize the work of Stefan Szczesny, both in France and internationally. The Endowment Fund aims to establish a Museum which would be dedicated to the work of this contemporary Master in the city of Saint-Tropez, to where he has moved since 2001.Céline Seidler-BahougneATELIER STEFAN SZCZESNY Galerie Espace des Lices 9, Boulevard Louis Blanc 83 990 Saint-Tropez FRANCE - +33 (0)4 94 97 41 99 +33 (0)6 42 40 29 65 infoszczesny@orange.frThe Atelier Stefan Szczesny is representing and promoting the work of the contemporary and international artist Stefan Szczesny.

03-26-2010 | IT, New Media & Software
Fluendo
Fluendo Codec Pack Release 11: Keeping Up with Technologies Fast Pace.
Barcelona, SPAIN – March, 2010 - Fluendo S.A announces the Codec Pack Release 11. Fluendo is an established leading provider of multimedia plug-ins for the GNU/Linux Market, and has succeeded in offering legal end-to-end solutions working with multiple formats and platforms. Offering their customers stable solutions and a quality experience when playing multimedia is Fluendo’s main objective. All the software developed by this company undergoes endless inspections and ongoing updates aimed
12-11-2009 | IT, New Media & Software
Fluendo
Fluendo group concerned over EC threat to open-source investment
Leading Spanish software company Fluendo S.A. today expressed its concern that, if upheld, the European Commission's objections regarding Oracle’s acquisition of Sun could set a precedent that will undermine the development of open source technology worldwide. As a key contributor to the Free Software multimedia landscape, the Fluendo Group believes that the Commission should abandon its view that any open source software product represents a price constraint on
04-11-2008 | IT, New Media & Software
Fluendo
The Fluendo Codec Manager now in the Madriva Spring 2008 to help users enjoy all …
BARCELONA, SPAIN April 9th, 2008 Fluendo S.A. announced, jointly with Mandriva, the new release of Codeina, the Codec Manager, integrated in the new Mandriva Linux Spring 2008 release. Most Linux distributions, by essence, do not include proprietary softwares such as audio and video codecs which are required to read multimedia files, like music or movies. Fluendo, a Spanish company renown as the main sponsor behind the GStreamer media framework and with
Comments about openPR
I can't but agree to the positive statements about your portal: easy to use, clear layout, very good search function, and quick editing!
Jens O'Brien, Borgmeier Media Communication