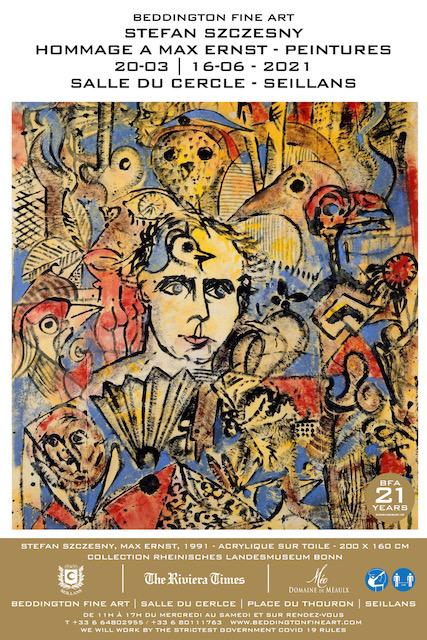 In the early '70s, the German collector and filmmaker Peter Schamoni (1934 - 2011) introduced Max Ernst (1891 - 1976) to Stefan Szczesny. This meeting generated a close collaboration between the two artists and Stefan Szczesny was invited to participate in Max Ernst's "Endlöse Spiele bereiten sich vor" in Munich's Kammerspiele theatre (1972). In the years that followed, and during his frequent visits to the South of France, Szczesny often visited the Surrealist Master in his Seillans studio. Max Ernst's creations deeply influenced the young artist who rendered homage to him via numerous canvases created in the '80s and with his "Portrait of Max Ernst" from 1991. Some fifteen works from Szczesny's surrealist period, inspired by Max Ernst and Pablo Picasso have been brought together and are unveiled for the first time in Seillans. This exceptional exhibition has been organised by Beddington Fine Art of Bargemon with whom Szczesny has been working since 2001. To celebrate the occasion, an original framed print of Stefan Szczesny’s "Portrait of Max Ernst" will be available in an exclusive edition of 21 copies.The exhibition is open daily from 20th March until 16th June 2021 by appointment and by reservation on + 33 - 664 80 2955 or contact@beddingtonfineart.com. Address : Salle du Cercle Place du Thouron 83440 Seillans.The Atelier Stefan Szczesny in Saint-Tropez is part of the Szczesny Factory (Berlin - New-York - Saint-Tropez) and represents the interests and the work of Stefan Szczesny.