Where To? 11 adds Augmented Reality, place collections and much more, now free to download 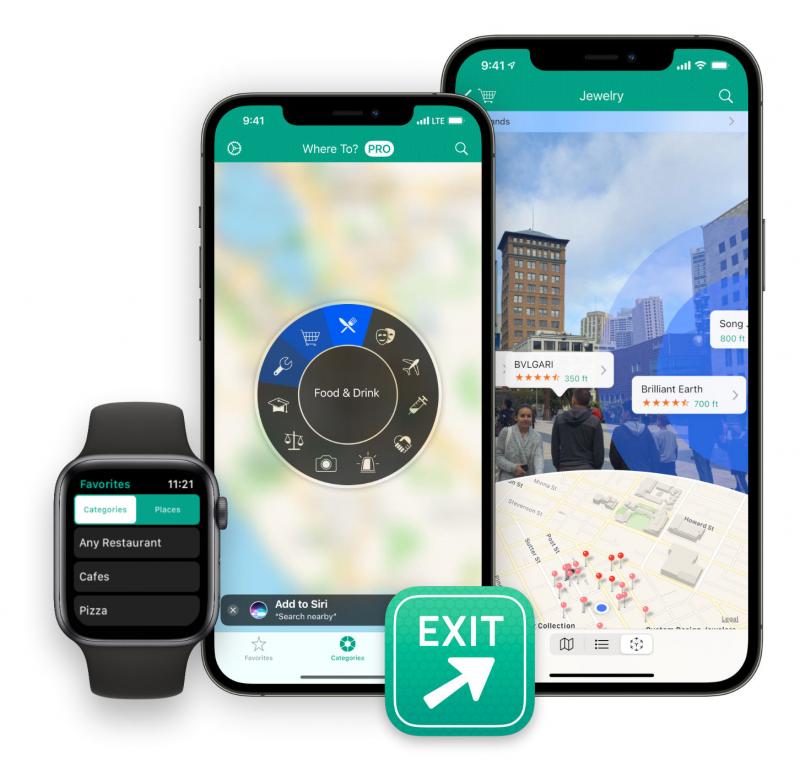 Where To? for iPhone and Apple Watch, now with AR

In its biggest update in history, Where To? 11 adds a ton of new features and moves to a freemium business model.The new Augmented Reality (AR) view visualizes nearby locations in the live camera view, on top of reality. Users can point their iPhone at the street scene and view nearby shops and services without having to read a map or list. AR in Where To? works worldwide and is not restricted to a few supported cities as in the Apple Maps app.Favorite places can now be organized in collections, for example for an upcoming trip. Collections can be imported from KML, KMZ or GPX and can be shared with friends.Navigating to a selected place is easier than ever with Where To? 11: Along with the option to get directions from more than 60 supported third party apps, the integrated wayfinder is more prominent and now also offers public transport directions, in addition to the existing car, bike and pedestrian routing.Being a first class citizen on iOS, Where To? 11 supports dark mode, adds context menus in various places, and improves its Siri integration by letting the users install a “Search nearby” Siri shortcut. When speaking the activation phrase, Siri refines the question by asking for the category the user wants to search for.Where To? 11 also offers configurable home screen widgets in various types and sizes. They can show selected or the last viewed places or categories.Also new in version 11 is the share sheet extension “Open Location in Where To?”. It detects addresses in text or websites but also opens places from other apps. As an example, the user can open places from travel apps such as Booking.com, OpenTable or Foursquare and save them in a collection. The Maps apps from Apple, Google, and others, many websites with place information, and text selections with addresses are supported, too.On the content level, Where To? 11 adds price ranges, home delivery options for restaurants, increases the number of locations with menus and reservation options and supports photos in reviews.New business model Where To? is now free to download and the standard feature set is free. A Where To? PRO subscription is available at $2.99/year with a one week free trial being available. The subscription is required for the following premium features: AR, directions, favorites & collections and location reminders. Existing users who purchased the app receive a free, lifetime Where To? PRO subscription.“By going free, we lower the barrier to download the app”, says Ortwin Gentz, FutureTap CEO. “We encourage everyone to try out Where To? as an alternative for their location finding needs.“ Where To? puts a strong focus on user privacy and doesn’t create any user tracking profiles. “We’re not in the business to sell our users’ data“, Gentz adds.Where To? 11 improvements in a nutshell: • Augmented Reality • Place collections with import & export • Directions with public transport support • Dark mode • Context menus • Improved “Add to Siri” • Widgets • “Open Location in Where To?” for the share sheet • Home delivery services, more dinner menus and reservation options • Photos in reviewsFutureTap GmbH Aubachweg 10, 82229 Seefeld, GermanyContact: Ortwin Gentz, CEO, pr@futuretap.com, Twitter: @ortwingentzFutureTap is an iPhone app developer since day zero of the App Store. "Where To?" was one of the first 500 apps when the App Store launched in July 2008 and has been sold more than 600.000 times since then. Ortwin Gentz, its founder and lead developer, is a longtime Mac and iPhone developer and received two Apple Design Awards.

You can edit or delete your press release Where To? 11 adds Augmented Reality, place collections and much more, now free to download here

05-07-2018 | IT, New Media & Software
FutureTap GmbH
Streets 4.0: Street View App Adds Drag and Drop and Live Panorama Mode
Streets, the popular Street View browser app for iPhone, iPad, and Apple Watch, is now available in version 4. The major update adds drag and drop on iPad and a new Live Panorama mode allowing to look around in a panorama simply by rotating the device. Streets is focused on delivering the best Street View browsing experience. The user can navigate to any 360° panorama simply by dropping a pin on
09-14-2016 | Tourism, Cars, Traffic
FutureTap GmbH
Where To? 10 is Available Including Where To? for iMessage and Emoji Search
Where To?, the popular GPS based local search app, is now available in version 10. It includes a new module for iOS 10 users: Where To? for iMessage allows to include local search results in the ongoing chat conversation without leaving the Messages app. Where To? 10 also adds emoji search for even quicker access to search categories. For several years, Where To? has been the handy travel assistant aware of
04-08-2016 | Tourism, Cars, Traffic
FutureTap GmbH
Streets 3 Offers Close-Up Street Level Views for iOS and Apple Watch
FutureTap GmbH today is proud to announce the release and immediate availability of Streets 3 – The Street View App, the all new version of their street level viewing app for iPhone, iPad, iPod touch, and Apple Watch. This app offers a panoramic, 360-degree view for nearly any location. Streets 3 has been enhanced with a number of new features, including iPad Pro support, an all-new user interface, and a
01-28-2016 | Tourism, Cars, Traffic
FutureTap GmbH
Where To? 9.0 Local Search App Now Offers iOS 9 and iPhone 6s Features
FutureTap GmbH today announces Where To? 9.0, an important update to their popular local search app for iOS and Apple Watch devices. Where To? finds nearby restaurants, shops, and other services. The app provides detailed information – including menus, offers, photos, videos, reviews, and more. Version 9.0 takes advantage of new iOS 9 features, including Spotlight search, as well as iPhone 6s features, such as 3D Touch. To celebrate the


More Releases for To?

09-11-2020 | Tourism, Cars, Traffic
Mongolian Ways
10 reasons to travel to Mongolia
Travel to Mongolia when the coronavirus (COVID-19) is over. Because Mongolia has been overshadowed for many years by its powerful neighbors, China and Russia. Despite the exceptional growth in international tourism, the country has escaped the trampling boots of thousands of travelers. Mongolia isn’t a place where you go to enjoy a typical vacation- it is a destination where you can discover a world that is completely different from the
08-24-2020 | Science & Education
Revitae Technologies
A Different Way to Get to 5G
Everyone in our world believes that the only way to get increased bandwidth is to move to higher and higher frequencies. That has been the model for well over 100 years. What if.... There was a way to use our existing 4G Infrastructure. Yes, the existing cell towers and 4G phones that are spread around our planet. This New Way? First some basic technology. Whenever we send a radio signal of any frequency, it
08-12-2016 | Science & Education
EdProcure
How to Market to schools
Every year the education budget in the UK is set to over £85billion and successive governments seem very keen on protecting this portion of their budget. The reasons for this are plenty but that’s not what we want to discuss here, it kind of doesn’t matter. What matters is how you get your business in front of school buyers, how you market to schools and how you make
12-14-2011 | Leisure, Entertainment, Miscel …
Sudocrem
Sudocrem to donate up to £25,000 to the NSPCC
Sudocrem, the UK’s leading nappy rash treatment, is delighted to announce a donation of up to £25,000 in total to the NSPCC. Sudocrem is currently supporting ‘All babies count’, an online campaign which will support the NSPCC’s work to prevent the abuse and neglect of babies. Here’s how you can support All babies count: Visit www.facebook.com/sudocrem or tweet about the campaign. Sudocrem will donate 50p for each ‘like’ on Sudocrem’s
09-15-2011 | Leisure, Entertainment, Miscel …
Forte Public Relations
EDGEMERE TO PRESENT “AN OVERTURE TO OPERA”
WHAT: Edgemere senior living community will present “An Overture to Opera” with Jonathan Pell, Artistic Director for the Dallas Opera. Get a front row seat to all the latest news and fascinating facts from the renowned Dallas Opera and its upcoming season. In addition, an emerging artist from the Dallas Opera will perform during the event. WHEN: Tuesday, October 4, 2011 7:30-8:30 pm Wine and dessert beginning at 7:00 p.m. WHERE: Edgemere senior living community 8523
04-01-2011 | Industry, Real Estate & Constr …
SEMIKRON
Customized to perform to perfection
Individually designed power modules supported by expert engineering: 10 A – 600 A Nuremberg, 30 March 2011 - Semikron offers customer-specific power modules with individual circuit topologies, chip combinations and protection supported by expert engineering service. The modules are designed and integrated as required in special packaging matched for UPS, solar, motor drives, welding or traction applications with output power of up to 150 kW. Semikron is one of
Comments about openPR
9 o'clock: discuss press release with client, 10 o'clock: submit release to openPR, within the briefest possible time release is published and displayed in a prominent place on openPR.de. I am thrilled!
Zehra Spindler, Calypso Now! - Communication Agency