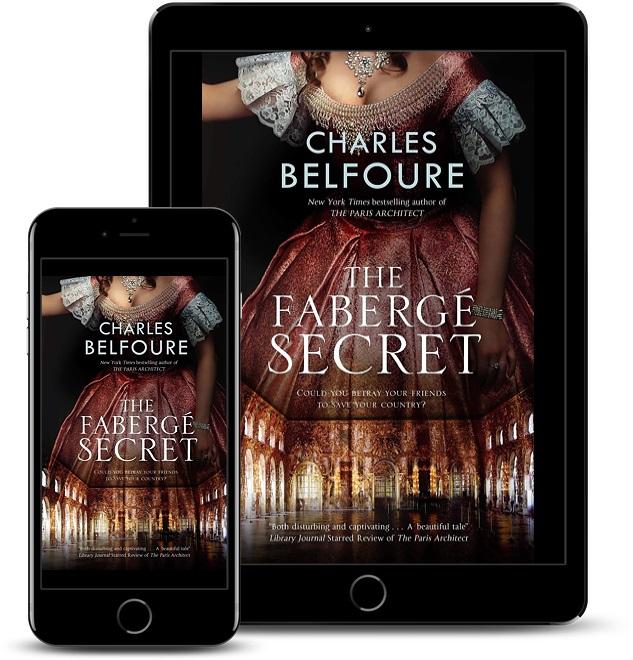 Best-Selling Author Charles Belfoure Releases New Historical Novel - The Fabergé Secret New York Times bestselling author Charles Belfoure is pleased to announce the release of his new historical novel, The Fabergé Secret. Released by Severn House Publishers in January 2021, the story takes readers on a breathless journey from the gilded ballrooms of Imperial Russia to the grim violence of the pogroms, in his latest thrilling historical adventure.The life of Prince Markhov of the Imperial Court of Nicholas & Alexandra is changed when he witnesses the aftermath of the 1903 Easter Sunday pogrom in Kishinev. He is shocked by the brutality the Jews & peasants must endure in Russia. Does he stand by or fight injustice? But fighting for what is right means betraying his lifelong friendship with the Tsar, Nicholas II and his own aristocratic class, giving up his wealth and privilege.THE FABERGÉ SECRET straddles two totally different worlds – the splendor of the Russian Imperial Court of Nicholas and Alexandra and the cruelty of the Pale of Settlement where all Jews in Russia were forced to live.You’ll enjoy watching a man discover of sense of humanity.The Fabergé Secret is available for purchase in print, audio and ebook formats. Book Information: The Fabergé Secret By Charles Belfoure Publisher: Severn House Publishers Published: January 2021 ISBN: 978-1780297255 (pb) ISBN: 978-0727890863 (hc) ISBN: 978-1448304462 (ebook) ISBN: 978-1662066771 (audiobook) ASIN: B08MQ214T1 Pages: 254 Genre: Historical Fiction, Historical Thriller, Jewish Historical FictionAbout the Author: Charles Belfoure is an architect and the New York Times Bestselling author of THE PARIS ARCHITECT.. He bases the plots of his historical novels on architecture and architects. He's also written House of Thieves and the Fallen Architect. Contact: Website: http://www.charlesbelfoure.com Twitter: http://www.twitter.com/CharlesBelfoure Facebook: https://www.facebook.com/CharlesBelfoureAuthor Instagram: http://www.instagram.com/charlesbelfoure Amazon Author Page: https://www.amazon.com/Charles-Belfoure/e/B001H6QOF6 Promo Link: http://bookbuzz.net/blog/historical-fiction-the-faberge-secret-by-charles-belfoure/Purchase Links: https://www.amazon.com/gp/product/B08MQ214T1 https://www.barnesandnoble.com/w/the-faberge-secret-charles-belfoure/1136653213?ean=9780727890863 https://www.kobo.com/us/en/ebook/the-faberge-secret-1 https://play.google.com/store/books/details/Charles_Belfoure_The_Faberge_Secret?id=CgEHEAAAQBAJ https://bookshop.org/books/the-faberge-secret/9780727890863 https://www.audible.com/pd/The-Faberge-Secret-Audiobook/1662066198Historical Fiction, Jewish Historical Fiction, Historical Thriller, BookBuzz, The Fabergé Secret, Charles Belfoure, Severn House PublishersBookBuzz.net 59 Heritage Way Drive Rome, GA 30165Website: http://bookbuzz.net/blog/historical-fiction-the-faberge-secret-by-charles-belfoure/BookBuzz.net helps indie authors, hybrid authors, and small publishers promote and market their books. We also help with book reviews, publicity, and more. Let's Create Some Buzz For Your Book!!!

11-18-2013 | Arts & Culture
FELDBUSCHWIESNER Gallery
FRIEDERIKE VON RAUCH | IN SECRET
Friederike von Rauch’s exhibition In Secret presents a selection of her photographs from different series produced between 2010 and 2013: focused and picturesque compositions of light and shade that elevate unremarkable architectural details to the status of stand-alone subjects and question our habits of perception. The works were created in various European museums and post-war modernist churches. Following her training as a silversmith, Friederike von Rauch studied Industrial Design at
08-26-2013 | Health & Medicine
Erler-Zimmer GmbH & Co. KG
A secret problem – Taboo hemorrhoids
Often it starts with a burning sensation on the skin. This is not only painful but also embarrassing, because it appears in a very intimate place, namely in the rectum. Many people have inhibitions to talk about problems with hemorrhoids. Hemorrhoids itself are really only arteriovenous vascular pads at the end of the rectum and are necessary for safe closure of the anus. If the veins will dilate and bulge
10-03-2011 | Health & Medicine
FEBICO
Japanese secret to longevity
It is slowly reaching the season of autumn, where temperature difference between night and day is clearly noticeable. This may cause vasoconstriction which may lead to cardiovascular diseases. According to a British research, cardiovascular diseases have a 25% higher percentage of occurring in autumn than in any other seasons. Low temperature may cause instability in the blood vessels, high blood pressure, poor blood circulation and other physiological changes. Coupled with
12-22-2010 | Fashion, Lifestyle, Trends
Turnbull Interiors
The Secret to Understanding Colour
Barrie, ON – December 20, 2010 – If the challenge of getting colours right is giving you a big headache then you have uncovered the first important clue to finding a solution to your colour problems According to Irene Turnbull of Turnbull Interiors the secret to understanding our likes and dislikes has more to do with how our brains function and connect us to the world of emotion and feelings than
11-15-2010 | Business, Economy, Finances, B …
Vince Stanzione-Forex-Finbets
Vince Stanzione’s "Seven Secret Keys"
Vince Stanzione’s big October 2004 seminar in London with Jim Rogers, an event billed as “Seven Secret Keys”. "If I was in the stock markets in the 60s, I would've made a lot of money. If I was in the stock market in the 70s, I would've made a lot of money" Vince was talking about the markets in 2004 and beyond and voicing his opinion that we have "never had
10-29-2007 | Fashion, Lifestyle, Trends
Secret Service
Secret Service: The Best Kept Secret in Town
10/26/2007 Los Angeles, CA - Located in a former air-raid shelter in the heart of Los Angeles’ industrial district, Secret Service is an appointment-only boutique that is challenging the rules of men’s retail. With minimal signage and no advertising, Secret Service has lived up to its name, gaining international attention from the Los Angeles Times, Anthem Magazine, which called the store “personalized and sleek” and joshspears.com which dubbed Secret Service “one
Comments about openPR
OpenPR is clearly structured and remains true to its principle of confining itself to the essential parts. OpenPR has proven to be a very good and reliable partner to our media agency: Within the shortest time the releases are online and go down well with the media representatives. The success of OpenPR is reflected in the steadily increasing number of press releases. It is good that OpenPR exists!
Ursula Koslik, Director Marketing & PR, F+W Hamburg