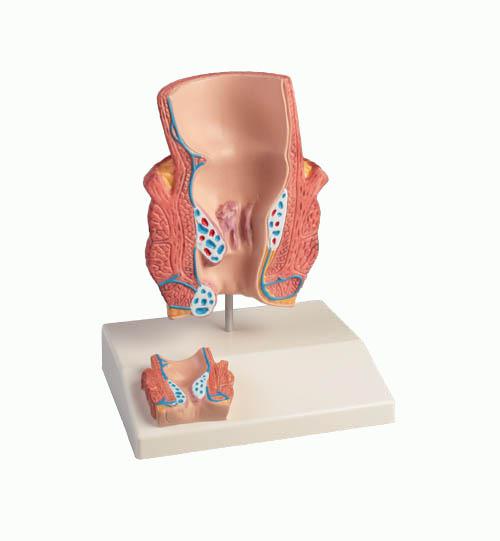 Often it starts with a burning sensation on the skin. This is not only painful but also embarrassing, because it appears in a very intimate place, namely in the rectum. Many people have inhibitions to talk about problems with hemorrhoids. Hemorrhoids itself are really only arteriovenous vascular pads at the end of the rectum and are necessary for safe closure of the anus. If the veins will dilate and bulge due to too high inner pressure, hemorrhoids will become a problem. Almost one half of all adults suffer from hemorrhoidalloids, often just called hemorrhoids in colloquial speech.

The formation of hemorrhoids can have many different reasons. These include chronic constipation, wrong alimentation, frequent use of laxatives as well as pregnancy and birth. However, long, intensive pressing and especially overweight are very common causes.
Hemorrhoids are a progressive disease, depending on how severe they are, they will be divided in four stadiums:

Stadium I: In this stadium, the hemorrhoids are only visible with an anoscope. Frequently, the swollen parts will lead to a slight burning and itching sensation.
Stadium II: The hemorrhoids will be pressed out during the defecation, but they will move back afterwards. A burning and itching sensation, exuding wounds and slight bleeding are the most frequent symptoms.
Stadium III: Now the hemorrhoids have been bulging to soft nodules, which can slip out of the rectum on walking. They will not move back itselves and can only put back with a finger. The nodules can become very sore and painful, they will burn and lead to bleedings.
Stadium IV: In this stage the whole inner parts of the rectum can be pressed out, medically one speak of a rectal prolaps. Most cases can only be treated with a surgical procedure, the pain and wound management is very complex and time-consuming.

In the first stadiums hemorrhoids can be treated well with creams, ointments and the right care of the rectum, f. ex. with disposable wash towels or shower toilet modules. Furthermore, high-fiber foods, sufficient fluid intake and sports can help to prevent hemorrhoids. It is also recommendable to avoid sitting too long on the toilet, as the shift in weight can result in “stretching” the vascular pads.

More information and models regarding hemorrhoids are available on www.erler-zimmer.de.

Erler-Zimmer GmbH & Co. KG; founded in 1949, run as a third generation, family owned enterprise. CEO Walter and Ute Probst. The company is specialized in anatomy, medical simulators and charts and has its own production site in Germany as well as highly reputed partners in Europe, USA and Asia.

09-13-2013 | Health & Medicine
Erler-Zimmer GmbH & Co. KG
Erler-Zimmer presents new skeleton model Oscar
The latest member of the skeleton model family by Erler-Zimmer was named Oscar today. The model is a reproduction of a male adult skeleton made of a durable, unbreakable plastic material; the about 200 bones of the skeleton correspond with real human bones in size and nearly in weight. Unlike other skeleton models with metal joints, Oscar has flexible rubber attachments in the shoulder, hip and knee joints that allow life-like,
08-26-2013 | Health & Medicine
Erler-Zimmer GmbH & Co. KG
First warning breast lumps: How can symptoms for breast cancer be identified?
Breast cancer or mast carcinoma is the most frequent type of cancer for women. Almost 60,000 breast cancers are reported annually in Germany. At a higher age, after the menopause, the risk is increasing significantly. An easy method to discover breast cancer in an early stage is self examination of the breast. The best time period to palpate the breasts is in the first days of menstruation, women in menopause can
08-26-2013 | Health & Medicine
Erler-Zimmer GmbH & Co. KG
A secret problem – Taboo hemorrhoids
Often it starts with a burning sensation on the skin. This is not only painful but also embarrassing, because it appears in a very intimate place, namely in the rectum. Many people have inhibitions to talk about problems with hemorrhoids. Hemorrhoids itself are really only arteriovenous vascular pads at the end of the rectum and are necessary for safe closure of the anus. If the veins will dilate and bulge
04-10-2013 | Health & Medicine
Erler-Zimmer GmbH & Co. KG
Product innovation – Erler-Zimmer introduces auscultation trainer with upgrade …
Even these days auscultation of heart and lung sounds are an essential part of every medical examination. Auscultation results are often the initial indication for further diagnosis. Learning auscultation is still one of the most challenging tasks medical students have to master, especially because learning on a real patient is almost impossible due to the sheer number of different sounds. The specialist for anatomical models and medical simulators Erler-Zimmer now presents