Bebe Runs in London on Springs 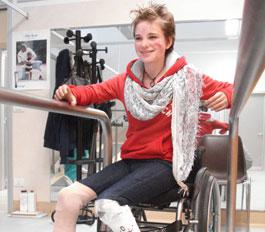 15 year old Italian girl will carry the Paralympic torch on the day of the opening ceremonyBebe is 15 and will be present in London: "Torch carrier at the Paralympic Games! I still cannot believe it. I cannot thank you enough." That was how it was written in the Corriere della Sera, which, along with other Italian newspapers, moved readers to campaign with an email to the International Paralympic Committee (IPC) for Beatrice Vio, whose nickname Bebe has stuck, first with friends and now in the media. The IPC said it was "overwhelmed" by more than 1000 mails and agreed. Bebe will carry the torch on the day of the opening ceremony on its way to the Olympic stadium. This decision made her "very happy", according to Bebe. At the torch relay she will be representing the Paralympic athletes of the future. Since winning the championship for under 17s in wheelchair fencing in 2011 she has become the Italian hope for the Paralympics. London 2012 is coming a bit too early for that. 2016 is her goal: "I want to fence in Rio, but also take part in the running competitions." In 2008, when Bebe was 11 years old, a complicated case of a meningitis disease led to both her arms and both her legs being amputated. In everyday life she uses prostheses from Ottobock; in January 2012 she tried out two sprint prostheses from the company for the first time. The prosthetists involved from Arte Ortopedica in Budrio, partners of Ottobock Italy for several years, were amazed and spoke of a sensation: very few get to grips with the carbon springs so quickly. "I was a bit anxious at first, but it is fun", said Bebe. If all goes well, she will be seen in London on these sprint prostheses during the torch relay and will win over more friends with her smile and high spirits. "I would also love to see the musical Mamma Mia, which my mother told me is great", she said on her first thoughts about her private itinerary. But the focus is on her desire to meet fantastic athletes and cheer for the Italians in the competitions. "I am sure that with me as a super-fan they will pick up loads of medals", said Bebe with a laugh, before adding: "And if not, that is also okay. I am not travelling to London to win, but to learn and to have fun." There is, however, still one condition for Bebe to be fulfilled. Her father is emphatic about flawless school work, if she wants to travel with him to London. "But if it continues as before, there won't be any problems", said Bebe, and explained further: "Let's hope that's how the teachers see it, too..."Before then there are a number of junior competitions on her itinerary, as well as working on the project "art4sport", which her parents founded to bring other youths with handicaps into sport too. Bebe's father Ruggero Vio sees it like this: "Before her illness I didn't even know that there was something like disabled sports. It is a wonderful world. And I am happy that Bebe is proud to be a part of it."Ottobock - Technology for People Otto Bock HealthCare helps people maintain or regain their freedom of movement with innovative products. Founded in Berlin back in 1919, the medical technology company has become a global market leader in the field of prosthetics. Other business units include orthotics, Mobility Solutions with wheelchairs, seating systems and child rehabilitation devices as well as, since 2006, neurostimulation. The activities of the global company with sales and service locations in 44 countries are coordinated from the head office in Duderstadt, South Lower Saxony. Professor Hans Georg Näder, the grandson of company founder Otto Bock, took over the management of the family company from his father Dr. Max Näder in 1990 and carried on as the third-generation CEO ever since. Further information: www.ottobock.comKarsten Ley Director Corporate Communication Otto Bock HealthCare GmbH, Max-Näder-Str. 15, 37115 Duderstadt Phone: +49 (0) 5527 848 3036, Fax: +49 (0)5527 848 3360 E-mail: karsten.ley@ottobock.de www.ottobock.com

09-30-2013 | Health & Medicine
Otto Bock HealthCare GmbH
World Record: 1002 Kilometres Nonstop
Manfred Putz (Ottobock Handbike Team): "Anything is possible if you just do it" Wheelchair driver and extreme athlete Manfred Putz now (since early on September 22, 2013) holds the world record: He rode a handbike 1002 kilometres since starting on Friday morning at 10 o'clock, with only two one-hour breaks to eat. To put this incredible performance into perspective, remember that a marathon of 42.195 kilometres is considered a long distance.
04-10-2013 | Health & Medicine
Otto Bock HealthCare GmbH
red dot awards for Ottobock
Awards for three product designs Ottobock impressed the 37 experts of the jury at this year's "red dot award: product design 2013" with its sport prosthesis, 1C63 Triton Low Profile prosthetic foot and Patella Pro knee orthosis. Among a total of 4,662 entries, these medical technical devices were selected both for their innovative concept and their high design quality. The award ceremony for the internationally recognised seal of quality will be
03-18-2013 | Health & Medicine
Otto Bock HealthCare GmbH
Ottobock expands its production and logistics site in Duderstadt
Investments of 35 million euros from 2013 to 2015 The family-owned business based in Duderstadt, Lower Saxony (Germany), is planning extensive expansion of its production in the areas of Prosthetic Feet and Socket Technologies and of the central logistics hub for its 49 foreign branches located throughout the world. The German global market leader for technical orthopaedics will invest 35 million euros from 2013 to 2015 in around 20,000 square metres of
03-04-2013 | Health & Medicine
Otto Bock HealthCare GmbH
Ottobock receives four awards at once
Company receives iF design awards Three Ottobock products received an iF product design award 2013, namely the knee orthosis Patella Pro, the Michelangelo Hand and the back orthosis line Soft Backs. In addition to that, the jury awarded the medical technology company an iF communication design award. Ottobock employees accepted the awards on Friday, 22 February 2013 at the BMW Welt in Munich, Germany, which is where the