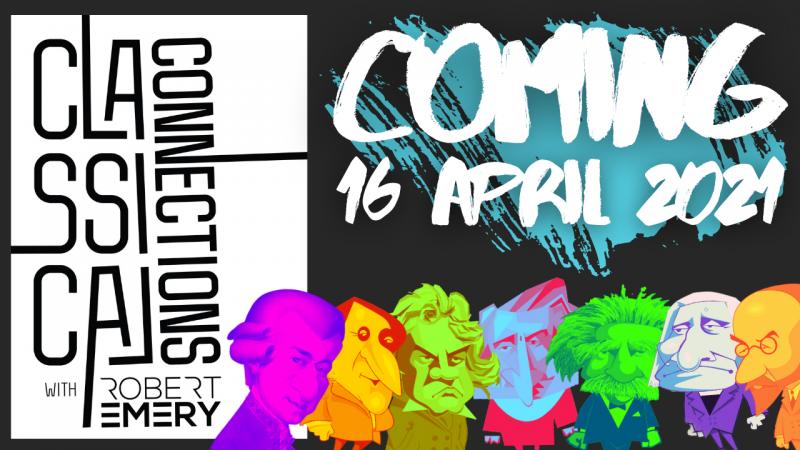 Coming 16th April 2021 - Classical Connections is a new digital TV series with a twist. Ever thought classical music is boring? Well, you thought wrong - and pianist & conductor Robert Emery will prove it.The 'Grand Master' composers have led fascinating lives. There are stories of cross-dressing, murder, sabotage, gluttony, love, hate, divorce, and much, much more. Nothing formal. Nothing stuffy. This is classical music at its most raw.These great composers are connected through the trials and tribulations of being a celebrity of their time. Robert Emery takes you on a whirlwind tour, discovering these stories in an unusual way. It's possible to connect classical music to anything... And Robert proves it by connecting two seemingly random items through the world of classical music, he is challenged to link a toothbrush to nursery rhymes through classical music. He is asked to connect a plastic frog to a drainpipe. Can he do it?Robert will show and prove that these composers not only wrote music that has stood the test of time, but their character shines through in ways you'd never imagine.To see which composers Robert Emery has included in his new series, visit the website: https://www.robertemery.com/classical-connectionsRobert Emery 85 Great Portland St First Floor London W1W 7LT­Press & PR Contact: Louise Harris PR Email: Louise@louiseharrispr.co.uk Website: www.louiseharrispr.co.ukRDCE (Robert D.C. Emery) is a conductor, pianist and serial entrepreneur.He is lucky enough to travel the world; ranging from performances in London's Royal Albert Hall, through to the Sydney Opera House, RDCE has seen them all.Besides music, RDCE is the Founder & Director of The Arts Group; one of the most diverse entertainment companies in the UK. Within the portfolio is a national music tuition agency, symphony orchestra, choir, artist agency, record label and production company. In 2021, he also setup a new venture - www.teds-list.com - aimed at helping people around the world to learn a musical instrument.Aside from that, he lives in London and Cambridge, has a wife (Mrs E), a toddler (Master T), a baby (Master A) and 4 cats.SERIES CREDITS: Director & Producer: Nick Thorogood Executive Producer & Production Manager: Jane Mote for beechtobeach Development Producer & Researcher: Alisdair Kitchen Senior Camera Operator: Josh Kershaw Camera Operator: Steve Mann Camera Assistant: Will Bolton Editor: Connor Whitfield Audio Mix: Gareth Williams Piano Technicians: Graham Ward & Jonathan Adams Hair & Makeup: Daisy Holubowicz Props, Wigs & Costumes: Annika Magnberg Location Facilitator: Jonathan AdamsSpecial thanks go to David Houlgate, Michael Maine & Richard Andrews for providing the piano & location.

10-07-2021 | Arts & Culture
Concerts of the Earth
Classical goes carbon-friendly with Concerts of the Earth
Choir of the Earth is thrilled to announce an exciting and environmentally-friendly new endeavour - Concerts of the Earth - bringing live and interactive concerts from sensational professional artists to a global at-home audience. When The Self-Isolation Choir’s Founder, Mark Strachan, announced its future-focused rebrand as Choir of the Earth in July 2021, he vowed to look to the environment for inspiration. The launch of Concerts of the Earth -
04-24-2020 | Arts & Culture
New York Kathak Festival
Classical dance festival goes online, making art accessible globally
Like so many arts organizations, the New York Kathak Festival (NYKF), a nonprofit that presents the Indian classical dance form, kathak, had to cancel its flagship event this April. Dance, music, and theater cancelations have been devastating to artists and audiences. Artists are struggling to earn a living and have their work seen, whereas audiences are starved for cultural enrichment. So NYKF decided to pivot--they shifted the entire festival online.
08-27-2018 | Arts & Culture
International Music Education Centre (IMEC) Canada
A Memorable Celebration of the Classical Piano Artistry!
The Piano Legacy concert is the pilot project of IMEC’s Professional Music Development Programs. And here at IMEC, we hope to continue this as a legacy many years down the road, just like the Olympics Torch Relay! National and International award-winning students of three of Toronto’s well-known pianists & pedagogues will be featured in concert alongside their teachers in September of 2018. For great
08-26-2013 | Business, Economy, Finances, B …
Redaktionsbüro für Bild & Text
Public Relations between Classical PR and Contemporary Online PR
The transfer of the public relations work to an experienced PR agency ensures that the public relations work for a company is handled professionally in any case Hanover, Germany, June 06, 2013 -- Normally, good public relations provide a much higher level of awareness of a company, service or brand. At the latest when a new company, a new service or a new product has been established or been put on
03-16-2011 | Arts & Culture
BookBuzz.net
A First For Classical Guitar; A First For Classical Music, Instrumental Influenc …
A First For Classical Guitar; A First For Classical Music, Instrumental Influences Is Filled With Insights And Wisdom Shared By Some Of The World's Greatest Classical Guitarists. For Immediate Release Over the centuries, the classical guitar in its various forms has inspired musicians and composers to create some of the world's most beautiful music. The elements of mastering the classical guitar have parallels in other areas of life; some parallels are
11-16-2010 | Leisure, Entertainment, Miscel …
VittekPR
Christina Marie Burke Releases Classical Crossover Debut
Memphis, TN November 11, 2010 – Blues City Music recording artist, Christina Marie Burke releases her classical crossover debut. The self-titled CD is a nine song compilation of religious, classical and pop songs demonstrating her diverse vocal range and repertoire. Recorded at Leeway Studios in Memphis, the CD is now available online at iTunes, Napster, Rhapsody, Amazon, AllMusic, IndieRhythm, CD Baby and is currently looking to establish international
Comments about openPR
Your portal is fast, simple, and easy to use. Others may have more functions but they also demand more editing time, you have to preformat the text in order to achieve a good result etc. I think openPR is really fantastic!
Andreas Knepper, wallmedien AG