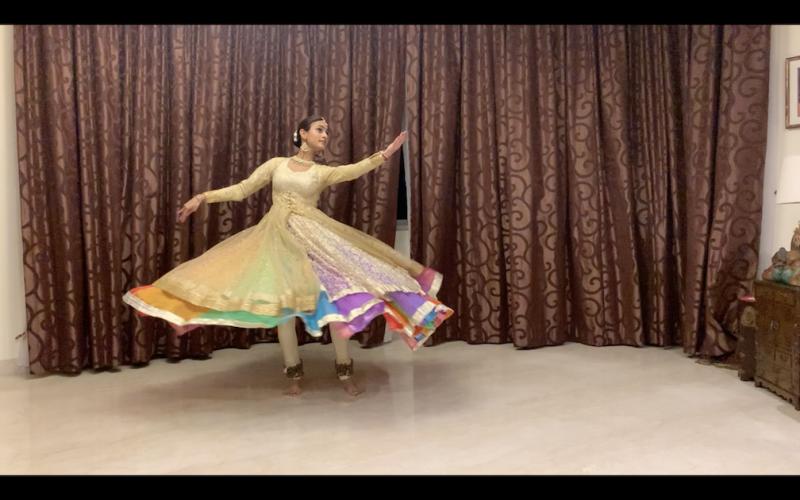 Like so many arts organizations, the New York Kathak Festival (NYKF), a nonprofit that presents the Indian classical dance form, kathak, had to cancel its flagship event this April. Dance, music, and theater cancelations have been devastating to artists and audiences. Artists are struggling to earn a living and have their work seen, whereas audiences are starved for cultural enrichment. So NYKF decided to pivot--they shifted the entire festival online. On Sunday, April 19th, the NYKF premiered an online festival, held at a time to ensure audiences from around the world could tune in together. The lineup featured 12 artists from the U.S., Canada, Singapore, Trinidad & Tobago, and the United Kingdom. Artists introduced a new level of vulnerability into their performances--sharing not only their perspectives and worldviews through their work, but also bringing the audience right into their living spaces--offering an unprecedented look into their lives, and their personas on and off stage. Kathak is a classical dance form that emphasizes storytelling, improvisation, and rhythmic exchange. Seetal Kaur, a performer from Leicester presented a traditional live solo, accompanied by her husband Kaviraj Singh on vocals and santoor, and brother-in-law Upneet Singh on tabla, showcasing the improvisation and musical exchange that are defining features of that kathak style. Singapore-based dancer Sunena Gupta's performance emphasized the storytelling aspect of the art form, as she presented her vision for what life could look like after the pandemic. The festival team looked at the shift to a fully online event as an opportunity. Minder Singh, the design lead said, "we explored multiple, ticketed platforms to host the event, but ultimately decided that a free, full length feature premiere on YouTube was the best option. It makes kathak, a high art, accessible and available to a broad audience." One YouTuber who tuned in commented: "Since I became handicapped it's not been easy to attend events like this in other cities so this online presentation was an accessibility blessing!" The move to hosting arts events online calls into question challenges around accessibility inherent within the field. Affordability is traditionally a barrier to access for audiences, and can be drawn open as events are held online. This moment also holds another opportunity to democratize the arts for artists. Anisha Muni, the programming lead for the festival said, "online concerts make it possible to present a more diverse roster of artists. The geographic distance is no longer an issue, nor are concerns around whether a dancer is emerging and unknown. It levels the playing field for artists who are looking for their audience." Online presentations are not without their challenges for dancers. Meenakshi Lala, who leads the team's sponsorship efforts, noted, "We heard from some artists that the NYKF Online presented new challenges for the performers. There's no feedback loop through applause, nor energy to be drawn from a physically present audience. Performing within limited spaces in their homes is also difficult." Despite the challenges however, the New York Kathak Festival's online event was an important effort towards fostering a sense of community. Hundreds tuned in to watch the event premiere together, and expressed their appreciation for the artists and the arts community. The event was supported by the Indian Consulate in New York. New York Kathak Festival 4265 Kissena Queens, New York Contact: Anisha Email anisha@nykathakfestival.com The New York Kathak Festival is a 501(c)(3) nonprofit organization that presents and promotes dancers, scholars, and practitioners of kathak, a classical dance tracing its origins to India. We produce a festival bringing together established and emerging artists from across the United States and beyond. The New York Kathak Festival is produced by the American kathak community to inspire creative exchange between local kathak artists and diverse New York audiences.