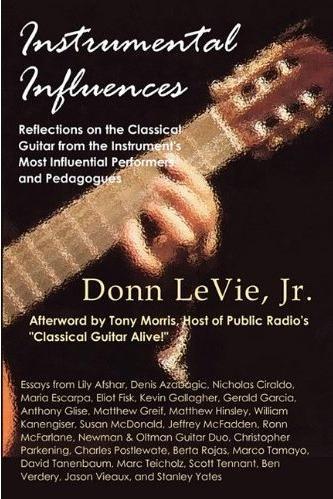 A First For Classical Guitar; A First For Classical Music, Instrumental Influences Is Filled With Insights And Wisdom Shared By Some Of The World's Greatest Classical Guitarists.For Immediate Release Over the centuries, the classical guitar in its various forms has inspired musicians and composers to create some of the world's most beautiful music. The elements of mastering the classical guitar have parallels in other areas of life; some parallels are more obvious than others and may be short-lived, while others reveal themselves over time to endure for a lifetime.Instrumental Influences from Donn LeVie Jr. is a refreshing original work that offers deeper insight into the demands of studying the classical guitar, and the rewards of that relationship that manifest themselves in other areas of the artists' lives and in the lives of anyone pursuing serious study of the instrument.In Instrumental Influences, the world's best classical guitarists reveal what lessons they have learned through the study of the classical guitar. The book also examines the parallel lessons that emerge from the study of technique, repertoire, memorization, music theory, performances/recitals, teaching, the study of music literature, and much more.Readers will discover in the 60 essays in Instrumental Influences not only the variables that classical guitar students, teachers, and virtuosos must develop over years of practice, but how such acquired, disciplined training opens up other avenues for personal growth.Instrumental Influences is the first project of its type in the history of classical guitar and classical music: Never before have so many classical music artists come together to lend their voices to a unique project that explore how teaching, studying, and performing on the classical guitar have all been "instrumental influences" in the lives of artists, teachers, and students.Essayists include six Grammy Award Winners, multiple Grammy Award nominees, and many former winners of the Guitar Foundation of America International Competition.Book Information: Instrumental Influences: Reflections on the Classical Guitar From the Instrument's Most Influential Performers and Pedagogues By Donn LeVie Jr. Publisher: Kings Crown Publishing ISBN: 978-0981485737 Pages: 312 Published: April 30, 2011About The AuthorAuthor, church musician, and classical guitarist Donn LeVie Jr. lives in Austin, Texas with his wife Jeanette. Donn writes books on sacred music and classical guitar topics, and is a sought-after presenter and speaker. Incorporating live classical guitar with nearly every speaking opportunity makes for highly a engaging and memorable experience for all audiences. His previous book is entitled, It's All About HYMN: Essays on Reclaiming Sacred and Traditional Music for Worship(Kings Crown Publishing, 2008).A native of Gloucester, Massachusetts Donn grew up in Ft. Lauderdale, Florida, where graduated with a B.S. in Geology from Florida Atlantic University. He recently completed the master's certificate program in Christian Apologetics from Biola University.Donn began his career as a research geological oceanographer for NOAA's Atlantic Oceanographic and Meteorological Labs in Miami, Florida for three years before moving to Houston to work as a geologist for Phillips Petroleum Company and pursuing an M.S. degree in Geochemistry from the University of Houston. He was also part-time adjunct faculty lecturer at the University of Houston Downtown College, Department of Natural Science and Mathematics. In addition, Donn was among the first group of qualified applicants for mission specialist positions with NASA's space shuttle program in the early 1980s.After the oil industry crash of 1986, Donn transitioned to the high-tech industry, working in marketing and technical communications positions for microprocessor leaders Motorola, Intel Corporation, and Marvell Semiconductor.Throughout his professional careers, Donn continued to perform in various bands. His return to studying and performing classical guitar in 2000 has been the most rewarding for him, through his studies with Dr. Nicholas Ciraldo, Dr. Adam Holzman, and Dr. Matthew Hinsley. Today, Donn's music focus is on performing classical guitar arrangements of sacred music, traditional hymns, and inspired classical music for houses of worship around the country as well as other organizations and conferences.Visit www.donnleviejr.com for more information on Donn's current and upcoming publications, live classical guitar performances, and speaking engagements. For more information, review copies, or interviews please contact the author at:Donn LeVie Jr. Email: info@donnleviejr.com Website: http://www.donnleviejr.comAvailable for purchase online from Amazon.com and CreateSpace. Bookstores should contact the Ingram for discounts & ordering information.Let's Create Some Buzz For Your Book!!!Our services are very simple, cost effective, yet very powerful in any marketing campaign. We don't offer a lot of services, just a few things that all authors and small publishers need when promoting their books.BookBuzz.net59 Heritage Way DriveRome, GA 30165info@bookbuzz.net

05-05-2021 | IT, New Media & Software
Valuates Reports
Development of the Worldwide Ultra-Wideband Market and Applications - Valuates R …
UWB (Ultra-wideband) was initially introduced to the market in 2000, but was soon replaced by Bluetooth and LoRa technologies. It was not until recently, when Apple adopted this technology in its iPhone 11, that UWB was back in the spotlight. The ability to achieve centimeter-level accuracy and high-precision positioning, coupled with the standardization of this technology, is expected to UWB more widely adopted in industrial, consumer, and automotive electronics applications. View
10-24-2018 | Arts & Culture
Expotrade
Fostering the Effective Convergence of Light, Space and Design
For the first time ever, Expotrade has diverted from its usual format to bring together the best minds in the lighting, interior design, and architecture fields at the inaugural 2019 Light•Space•Design summit. With plenty of technological and societal shifts rapidly impacting the lighting industry, the summit intends to start a conversation about how best to tackle the practice of architectural lighting design against the backdrop of these changes. Creating human-centric, appropriately-lit spaces
08-09-2017 | Leisure, Entertainment, Miscel …
Music Promotion Club
Donn Johnson's New Album "Paycheck 2 Paycheck" Creating Buzz
Have you heard Donn Johnson’s new album “Paycheck 2 Paycheck” in soundcloud? Well, this Atlanta based singer is creating craze with his unique musical blend. Donn Johnson wants to touch the zenith of success. Listeners and fans are impressed hearing to his new music album “Paycheck 2 Paycheck”. Songs of this album have already gathered a good number of plays count, likes and comments as well. Donn Johnson expects this
07-19-2017 | Leisure, Entertainment, Miscel …
Music Promotion Club
Donn Johnson Arrives on SoundCloud with “Paycheck 2 Paycheck”
Hip hop consists of four original elements which makes any song very attractive. Those elements contain deejaying, emceeing, break-dance and many more elements. It was celebrated among the American African working class. Rap generally means the rhyming word made by mouth. Donn Johnson is the hip hop singer who arrives on SoundCloud with his refreshing album “Paycheck 2 Paycheck”. You will love the technicality used in his music. The artists’
04-26-2011 | Tourism, Cars, Traffic
Morris County Tourism Bureau
Signs of spring invite visitors to Morris County’s lush gardens and parks.
The Morris County Park System has always been a jewel in the crown of Morris County government. Lush green spaces, rolling hills and trees and plants in flower from early spring throughout the fall mean there is much for visitors to appreciate and enjoy in their natural state. Longtime residents glow with pride when escorting visitors to some favorite sites while newcomers to the area are always intrigued by all
10-20-2009 | Business, Economy, Finances, B …
Ubisense
Ubisense and Donn Technology (Nanjing) Co., Ltd. to provide localised developmen …
Singapore, October 20 2009, Ubisense, the world Leader in Precise Real-Time Location Systems and Donn Technology (Nanjing) Co., Ltd, the leader in research and application development for positioning Systems, today announce that they have entered into a Value Added Reseller Agreement to serve customers in China. “Gathering accurate and reliable location data on people, assets, tools and equipment in indoor environments has been the biggest challenge for our customers, “states Mr.
Comments about openPR
I can't but agree to the positive statements about your portal: easy to use, clear layout, very good search function, and quick editing!
Jens O'Brien, Borgmeier Media Communication