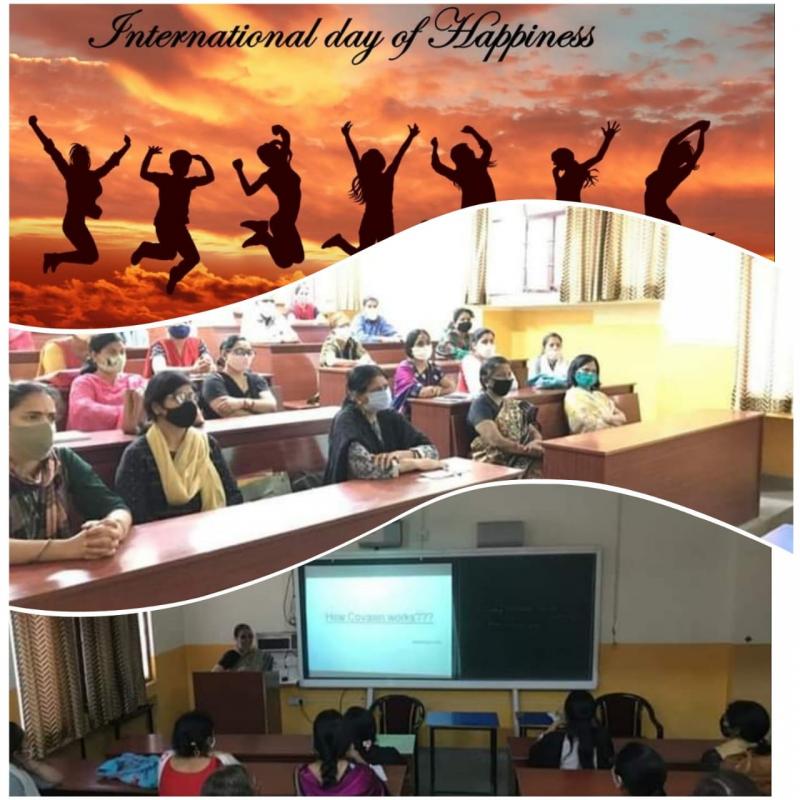 Smt. Jamuna Mishra Academy JMA established in the year 2004 is presently one of the most sought after schools at Pilani considered as Oasis in the desert state of Rajasthan. It is a matter of great pride that alumni of JMA are presently pursuing higher education in various institutions which include NAAC A++ and UGC Category-I, Banasthali Vidyapith which in Times Higher Education 'THE' is Second Best Women's University in global rankings as well as Institution of Eminence BITS Pilani.JMA Pilani has established a rich tradition of observing various days and festivals of international as well as national importance on a regular basis. Due to COVID-19, with schools closed keeping the children engaged academically and culturally has become a serious challenge for many educational institutions in India today with a few exceptions such as JMA Pilani. International Day of Happiness (March 20) is a global day to recognize the importance of happiness in the lives of people around the world.Philosophers debated the nature of happiness for thousands of years, but scientists have recently discovered that happiness means different things. Three major types of happiness are high life satisfaction, frequent positive feelings, and infrequent negative feelings. “Subjective well-being” is the label given by scientists to the various forms of happiness taken together. The five skills namely Savor, Thank, Aspire, Give and Empathize in short called S.T.A.G.E. framework are said to Increase your Happiness. In a nutshell Happiness = Letting Go + Acceptance + Gratitude.Since the first World Happiness Report by United Nations in 2012, four different countries have held the top position: Denmark in 2012, 2013 and 2016, Switzerland in 2015, Norway in 2017, and now Finland in 2018, 2019, 2020 and 2021. Out of the 149 countries surveyed in 2021, the remaining countries in the top ten are Iceland, Denmark, Switzerland, The Netherlands, Sweden, Germany, Norway, Luxembourg and New Zealand. According to the report with Pakistan at 105, Bangladesh at 101 and China at 84, India stood at 139.With all COVID protocols strictly in place, on 20 Mar 2021, JMA Pilani organized a function to celebrate the Happiness Day. Principal Mrs Booma shared the significance of the day and invited Mrs Anuradha Soni who teaches Biology as a mission with passion at JMA Pilani to deliver a talk on how the COVID 19 Vaccine works. It goes without saying that today across the world one and only thing which brings happiness to one and all is COVID 19 Vaccine. Dr Anuradha’s talk highlighted the spike proteins and its buildup, DNA inside an adenovirus, spotting the intruder, making antibodies, stopping the virus, killing infected cells, remembering the virus. mRNA vaccines may be new, but the technology is not as mRNA vaccines have been studied for influenza, Zika, and rabies. There was a loud round of applause when she mentioned that the immune system also contains special cells called memory B cells and memory T cells that might retain information about the corona virus for years or even decades.For more details about JMA Pilani see http://www.jmapilani.org/Default.aspxMrs Booma Natarajan, M.Sc., M.A., B.Ed. Principal, Jamuna Mishra Academy – JMA Near Old Pilani Post Office Pilani Rajasthan 333031 India Phone 91-1596-242314 Email booma_pilani at yahoo.co.in Website: http://www.jmapilani.org/Default.aspx FaceBook: https://www.facebook.com/JMAPilaniRajasthanRank1/About JMA Pilani: Jamuna Mishra Academy - JMA Pilani is a Co-educational English Medium School with Experienced Teachers, Spacious Classrooms and Modern Amenities designed to impart Quality Education combined with All Round Personality Development and lay the Best Foundation for the Child’s Future. While the school admits both boys and girls, the girl student enrollment has been steadily rising every year and is presently nearly 50% of the total strength. Right from its inception, JMA Pilani has embarked on a rich tradition of celebrating various days of national and international significance and festivals which makes it a cut above the rest schools in Pilani. The school has for boys and girls Scout and NCC, girls’ band which has been winning laurels every year. NCC cadets of JMA Pilani have also been selected for participation in Republic Day Camp RDC and Shivaji Trail Trek. Yoga, Karate, Painting and Music are not just part of school routine but a way of life for the students. It is a matter of great pride that JMA Pilani is referred popularly as the School with 100% Results on account of outstanding results year after year in Board of Secondary Education Rajasthan RBSE Class X and Class 12.

07-17-2017 | Science & Education
Banasthali
Banasthali PMMMNMTT National Workshop on Well Being and Happiness Concludes
According to the great western philosopher Socrates, "The secret of happiness is not found in seeking more, but in developing the capacity to enjoy less". In terms of Eastern Philosophy, according to Gautama Buddha “There is no path to happiness; happiness is the path" Banasthali Vidyapith which is a centre for Pandit Madan Mohan Malaviya National Mission on Teachers and Teaching PMMMNMTT organized a weeklong national workshop during 9 -
10-10-2016 | Associations & Organizations
FS Foundation
FS Foundation - Let’s bring happiness stories discloses the Mantra behind Happ …
“Joy is prayer; joy is strength: joy is love; joy is a net of love by which you can catch souls.” This is a beautiful quotation that you would have heard many a times. But where does the joy lies? Where is the real happiness? Is it your work increment? Is it a new smart phone gift? Is it a trip abroad? What is it? FS Foundation – Let’s bring
09-27-2016 | Associations & Organizations
FS Foundation
FS Foundation – Let’s Bring Happiness Informs How and Where to Contribute fo …
Happiness is for everyone; let’s join the mission of happiness. With this, FS Foundation – Let’s Bring Happiness comes up with an initiative to bring happiness in the life of other people. When we see around, we shall find many people who are doing great job for others smile. Such people are becoming lower to low and this is creating more and more people becoming sad and alone. In this
05-17-2016 | Leisure, Entertainment, Miscel …
Choose Art
Unusual Happiness Expert Publishes Book of Teddy Bear Philosophy
VERO BEACH, FLORIDA. The author of 2014's "oddest title in the world" has teamed up with an unusual co-author, a stuffed polar bear named Frank Lloyd Bear. Margaret Meps Schulte, who won the Bookseller Diagram Prize for Strangers Have the Best Candy, is launching The Joyful Bear: A Furry Philosophy for Overcoming Adversity and Finding Happiness on Kickstarter this week. The book is intended as a concise nightstand resource, with
09-18-2012 | Business, Economy, Finances, B …
UAE Exchange
UAE Exchange Onasowbhagyam spreads happiness among Keralites
Onasowbhagyam 2012 Mega prize winner drove home a Hyundai Sonata Car, while 21 lucky customers won a gold coin each, in the final draw held recently. Onasowbhagyam promotion reached its end, and the final draw held at the UAE Country Head Office of UAE Exchange in Dubai saw the mega prize winner, Mr. Vinesh Kumar, driving home a Hyundai Sonata Car, while 21 others won a Gold Coin each. Customers of
06-11-2012 | Sports
Omron Healthcare
Runner’s High – Neurochemical happiness on the track
Euphoria, ecstasy, adrenaline – The runner’s high suprises athletes right in the middle of a strenuous run. Giving all they have, with enormous exertion, a feeling of elation suddenly appears. Close to their physical and mental limits only moments before, runners suddenly become euphoric and forget about the pain. An exceptional neurochemical condition mobilises unexpected reserves of strength. But how do runners reach this state and what exactly happens in
Comments about openPR
OpenPR ist the nicest and most clearly laid out PR platform I have seen to this day. The press releases are displayed very nicely and clearly and without any unnecessary frills. The updates are fast and the finished release looks appealing and is clearly legible. Even with 16 years of experience one discovers new things from time to time. Congratulations!
Gabriele Ketterl, Director Marketing & PR, Menads