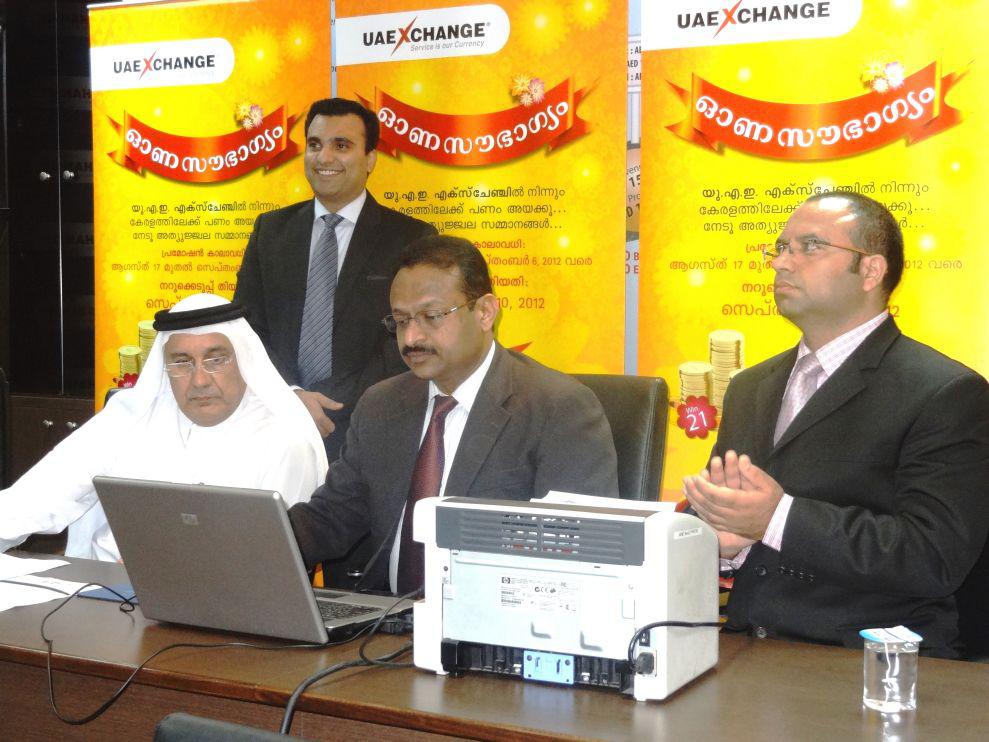 Onasowbhagyam 2012 Mega prize winner drove home a Hyundai Sonata Car, while 21 lucky customers won a gold coin each, in the final draw held recently.Onasowbhagyam promotion reached its end, and the final draw held at the UAE Country Head Office of UAE Exchange in Dubai saw the mega prize winner, Mr. Vinesh Kumar, driving home a Hyundai Sonata Car, while 21 others won a Gold Coin each. Customers of the global money transferrer, who sent money to Kerala from the UAE, during the promotion period, between 17th Aug. and 6th Sept. 2012, were qualified to participate in the draws. “Congratulations to all the winners!” said Mr. Varghese Mathew, Country Head- UAE Exchange. “India is the largest receiver of remittances, in which, the contribution of the enterprising Malayali community, from the UAE, is substantial. Since over three decades, UAE Exchange is their trusted channel to send money home. Onasowbhagyam promotion is our way of expressing gratitude to the trust they bestowed on us, to which the response was overwhelming as usual. We are also thankful to our partners for making it more exciting this time.” added Mr. Mathew.Mr. Gopakumar Bhargavan, Chief Marketing Officer, UAE Exchange said, “Onasowbhagyam is our annual offering to the Keralite community in the UAE. Malayalis are known not only for their commitment to work but also for their family-loving nature. So the prizes, offered in this promotion, would have added lot of value to the families, making their dreams come true.”Onasowbhagyam is one among the many in-branch promotions offered by the global money transferrer. The other popular promotions include Money Majlis, Filipino Fest and more. UAE Exchange runs equally exciting versions in its online social media space too. The strong online community of UAE Exchange in Facebook has 100,000 followers. This active community of customers gets to participate in various online contests like UAE Exchange Fan of the Week Contest, Money2anywhere.com Refer and Win Contest, Travel Photo Contest and more. Customers of the remittance major, thus get to enjoy value-addition from both in-branch and online promotions, which offer them exciting prizes including villas, cars, gold, electronic gadgets and more.About UAE Exchange UAE Exchange is a leading global remittance and foreign exchange brand, based in UAE, with over 600 direct offices in 30 countries across five continents. With ‎correspondent banking relationship with more than 150 global banks, and associations with ‎ leading global brands, UAE ‎Exchange provides ‎unmatched service to over 3.5 million customers, worldwide. In UAE, the ‎brand has a leading presence with a network of over 121 branches covering all the Emirates.UAE Exchange Lahcen ATERTA Manager Media Relations Al Saigh Building, Hamdan Street, PO Box 170, Abu Dhabi, UAE Telephone: +971-2-4945480 aterta.lahcen@uaeexchange.com