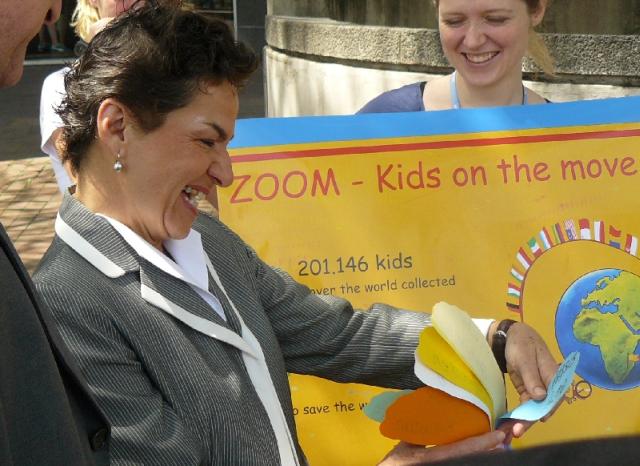 Christiana Figueres with the Green Footprints in Johannesburg

Green Footprints for a Better ClimateUN Climate Executive Secretary Christiana Figueres sends video message to ZOOM participantsGrassroots actions rather than unfruitful negotiations: “ZOOM – Kids on the Move” demonstrate to politicians and the adult public worldwide that they do not accept empty promises. They cannot be prevented them from contributing personally to climate protection. Children between four and twelve years of age may participate in the 2012 campaign actions weeks.Since 2002 young children all over Europe are participating in Climate Alliance’s climate protection activities. In 2012 they get special support by the UN Climate Executive Secretary Christiana Figueres. In a short video message she does not only thank the children for their previous success but also asks them for a further challenge: “Can you also teach your parents how important it is to transport themselves in a responsible way?”“Kids on the Move” travel climate-friendly by foot, bike, roller-skates, bus and train etc. in their daily life and collect “Green Footprints” for a better global climate. Each journey travelled by sustainable means counts as one Green Footprint. Climate Alliance will hand over the footprints collected all over Europe to the participants at the United Nations Climate Conference in the Emirate Qatar at the end of the year.Tens of thousands of children in kindergartens and schools in Austria, Czechia, Germany, Hungary, Italy, Luxembourg, Netherlands, Sweden, Switzerland and Ukraine are already ZOOMing for sustainable mobility and climate protection in a playful way. They are ready to find out how to contribute to a better climate by walking or cycling, they hear about the ways to school in other countries and they gain knowledge of the global climate situation on a symbolic, virtual trip around the world. This climate trip leads them through all continents and ends at the United Nations Climate Conference in Doha, in the Emirate Qatar. All didactic materials are ready to be downloaded at http://www.zoom-kidsforclimate.eu (They are also available from Climate Alliance’s office in Frankfurt.)The video message from Ms Figueres can be seen at http://www.zoom-kidsforclimate.eu/participants.htmlFor further information please contact: Claudia Schury, Tel. +49-69-717139-22, c.schury@climatealliance.orgClimate Alliance / Klima-Bündnis / Alianza del Clima e.V. European Secretariat Galvanistr. 28, D-60486 Frankfurt am Main Tel. +49-69-717139-0, Fax +49-69-717139-93 europe@climatealliance.org http://www.climatealliance.org and http://www.facebook.com/ClimateAllianceThe Green Footprints Campaign of Climate Alliance In 2002, the Climate Alliance started the mobility campaign for children, extending it to the whole of Europe in 2003 under the motto “ZOOM – Kids on the Move”. Since then over 1 million children from 35 countries have participated, more than 200.000 last year alone.The “Climate Alliance of European Cities with Indigenous Rainforest Peoples” is the largest city network with more than 1,600 members in Europe advocating for climate protection and the preservation of tropical rainforests. The members commit to reduce their CO2 emissions by ten per cent every five years and to halve their per-capita emissions by 2030 (base year 1990).