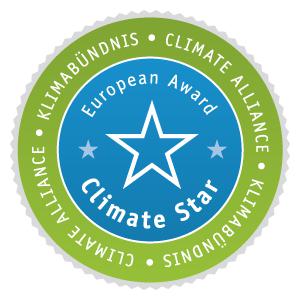 In Schloss Hof in Lower Austria 20 cities, municipalities and local authorities associations from nine European countries were awarded with a Climate Star 2012 for their commitment in climate protection yesterday. The honoured communities set themselves ambitious climate protection goals in avoiding CO2 emissions and using renewable energies. They design scenarios for the future of transport and mobility, for power supply and savings. And they have already implemented very much.According to the motto “Climate Unites” for the fifth time Climate Alliance invited European local authorities to apply with exemplary climate protection actions and measures for a Climate Star. The international award demonstrates that climate protection goes beyond borders. On the contrary: one success factor in climate protection is cooperation – local authorities with their citizens, with other cities and municipalities, with the region and with countries.The projects and the evaluation of the entire local climate protection measures from 20 cities, municipalities and associations of local authorities are so convincing and exemplary that they were highlighted in four size categories with a Climate Star. The solemn award ceremony and gala was held on invitation of the Federal State of Lower Austria in Schloss Hof on 26 April 2012.In the category of local authorities with more than 100,000 inhabitants the cities of Bolzano (IT), Leipzig (DE) and Zurich (CH) were awarded. In the category between 10,000 and 100,000 inhabitants the cities of Schwaz (AT), Neumarkt i.d.OPf. (DE), Lucerne (CH), Sanem (LU) and Veszprém (HU) received a Climate Star. Of the municipalities with less than 10,000 inhabitants Čierny Balog (SK), Gallneukirchen (AT), Großschönau (AT), Hostětín (CZ), Kötschach-Mauthen (AT), Mórahalom (HU), Seeham (AT) and Wieselburg (AT) were awarded. In the category of associations of local authorities the Province of Rome (IT), the Local Energy Agency Osona (ES), the Region Andalusia (ES) and the Model Region Bucklige Welt (AT) received a Climate Star.Please find further information about the projects of the awarded cities, municipalities and associations of local authorities at: http://www.climate-star.netThe “Climate Alliance of European Cities with the Indigenous Rainforest Peoples” is the largest city network committed to climate protection and preservation of the tropical rainforests. Since 1990, Climate Alliance has supported a total of now over 1,600 members from 19 European countries in attainment of their voluntary commitments to reduce CO2 emissions by ten percent every five years and to halve per capita emissions by 2030 at the latest (base year 1990). To preserve the tropical rainforests, Climate Alliance cooperates with Indigenous rainforest peoples.Climate Alliance / Klima-Bündnis / Alianza del Clima e.V. European Secretariat Galvanistr. 28, D-60486 Frankfurt am Main Tel. +49-69-717139-0, Fax +49-69-717139-93 europe@climatealliance.org http://www.climatealliance.org and http://www.facebook.com/ClimateAlliance