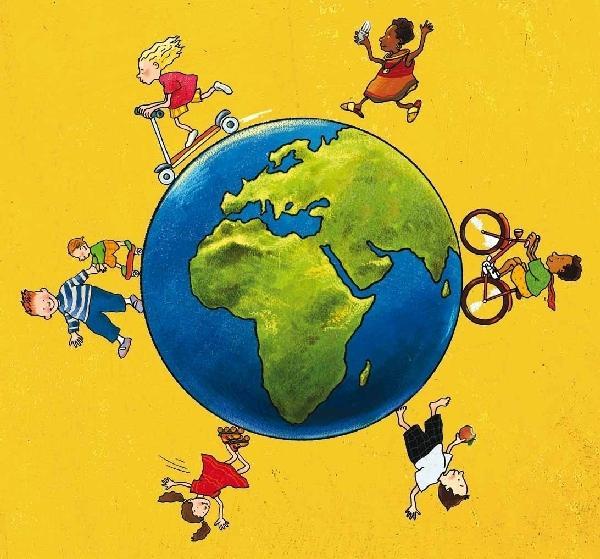 On Wednesday, 30 November, Climate Alliance handed over 2.7 Million “Green Footprints” collected by 200,000 children in 25 countries to UNFCCC Executive Secretary Christina Figueres in Durban.In 2011 Climate Alliance’s campaign “ZOOM – Kids on the Move for Climate Action” did not only run for the tenth time but also set new records: 201,146 kids from 16 European and further nine countries (Austria, Belgium, Cocos Keeling Islands, Czech Republic, Denmark, France, Germany, Hungary, India, Indonesia, Italy, La Reunion, Luxembourg, Malaysia, Malta, Mauritius, the Netherlands, Poland, Romania, Singapore, Slovakia, Sweden, Switzerland, Tanzania, Thailand and the Ukraine) ZOOMed in and together collected 2,710,340 “Green Footprints” by using sustainable means of transport for their daily journeys, by saving energy in their schools and kindergartens, and by eating regional food.The children presented these splendid results of their Climate Action to the UNFCCC Executive Secretary Christina Figueres substitutional for the participants of the UN Climate Conference and called to take concrete steps towards saving the world’s climate right now. Figueres was very impressed by the presentation of the collected miles illustrating the children’s efforts and looked over the respective results of each country. “I also would like to have Green Miles”, she said, “because I go to work by bike.” Moreover, she asked the children to convince their parents to be “Adults on the Move for Climate Action!”.The Executive Director of Climate Alliance Thomas Brose was accompanied by representatives of ZOOM participants from Austria, Germany, Luxembourg, the Netherlands as well as by the Swiss circumnavigator Dario Schwörer head of the NGO TOPtoTOP. Brose said: “The children have been on Climate Action for ten years while the adults have talked and talked without coming to a conclusion. Now, the children very much hope that the politicians in Durban are willing to actively contribute to climate protection too and will pave the way for a worth living future.”“ZOOM – Kids on the Move for Climate Action” is Climate Alliance’s annual campaign on sustainable mobility for children aged 4 to 12 years old. ZOOM is running since 2002 and aims to show that the ‘little ones’ can take steps to help protect the climate too and not just talk about climate protection like the ‘big ones’ at the UN Climate Summit.Photos and further information: Claudia Schury, Tel. +49-69-717139-22, c.schury@climatealliance.org http://www.zoom-kidsforclimate.eu/results.htmlThe “Climate Alliance of European Cities with the Indigenous Rainforest Peoples” is the largest city network committed to climate protection and preservation of the tropical rainforests. Since 1990, Climate Alliance has supported a total of now over 1,600 members from 18 European countries in attainment of their voluntary commitments to reduce CO2 emissions by ten percent every five years and to halve per capita emissions by 2030 at the latest (base year 1990). To preserve the tropical rainforests, Climate Alliance cooperates with Indigenous rainforest peoples.Climate Alliance / Klima-Bündnis / Alianza del Clima e.V. European Secretariat Galvanistr. 28, D-60486 Frankfurt am Main Tel. +49-69-717139-0, Fax +49-69-717139-93 europe@climatealliance.org http://www.climatealliance.org

You can edit or delete your press release Children in 25 countries joined forces and collected 2.7 Million “Green Footprints” for the UN Climate Summit here

05-15-2012 | Tourism, Cars, Traffic
Climate Alliance / Klima-Bündnis / Alianza del Clima e.V.
European Campaign “ZOOM – Kids on the Move” has officially been launched a …
Green Footprints for a Better Climate UN Climate Executive Secretary Christiana Figueres sends video message to ZOOM participants Grassroots actions rather than unfruitful negotiations: “ZOOM – Kids on the Move” demonstrate to politicians and the adult public worldwide that they do not accept empty promises. They cannot be prevented them from contributing personally to climate protection. Children between four and twelve years of age may participate in the 2012 campaign actions weeks. Since
04-30-2012 | Energy & Environment
Climate Alliance / Klima-Bündnis / Alianza del Clima e.V.
Climate Star 2012 – 20 Cities and municipalities awarded
In Schloss Hof in Lower Austria 20 cities, municipalities and local authorities associations from nine European countries were awarded with a Climate Star 2012 for their commitment in climate protection yesterday. The honoured communities set themselves ambitious climate protection goals in avoiding CO2 emissions and using renewable energies. They design scenarios for the future of transport and mobility, for power supply and savings. And they have already implemented very much. According
11-26-2011 | Energy & Environment
Climate Alliance / Klima-Bündnis / Alianza del Clima e.V.
Handover of “Green Footprints” to UNFCCC Executive Secretary at COP17
Date and location: Wednesday, 30 November, 9:30 Outside entrance by flags On Wednesday, 30 November, Climate Alliance will hand over “Green Footprints” collected by 200,000 children in 25 countries to UNFCCC Executive Secretary Christina Figueres in Durban. “ZOOM – Kids on the Move for Climate Action” is Climate Alliance’s annual campaign on sustainable mobility for children aged 4 to 10 years old, which aims to show that the ‘little ones’ can take steps to
11-19-2011 | Energy & Environment
Climate Alliance / Klima-Bündnis / Alianza del Clima e.V.
TURaS: 16 European cities meet in Dublin to launch EU initiative on urban resili …
Representatives of 16 European cities as well as research institutions and the city network Climate Alliance came together in Dublin to launch the TURaS (Transitioning towards Urban Resilience and Sustainability) project which aims to enable European cities and the surrounding rural areas to build resilience in the face of significant sustainability challenges. For the first time in history more than 50 percent of the world's population now live in urban areas.