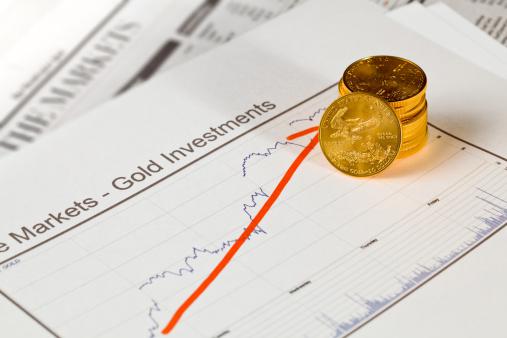 A lot of talk has been focused on gold bullion over the past few years and Sasha Cekerevac, contributor to Profit Confidential, has identified a positive technical indication that might lead to a potential breakout. Cekerevac believes that the recent pullback in gold does not invalidate the bull market in gold bullion, but he is waiting for a breakout outside the current trading range to become manifestly bullish.In the recent article, Gold Bullion Setting up for Breakout, Cekerevac notes that the fundamental stance for higher gold prices remains, including the recent economic data pointing to continued weakness and the endless money printing by governments around the world.After a long move up in gold prices, Cekerevac suggest that a period of consolidation is healthy. “Gold prices in 2012 are entering a tighter and tighter ‘wedge’ formation,” suggest Cekerevac. What will happen next for gold prices according to Cekerevac is that either the bulls or bears will want to expand their transactions for more than the market can handle, driving gold prices through one side of the current trading range.“We just witnessed one positive sign for gold prices: the low in April was a higher low than the one preceding it,” suggest Cekerevac. “This is a first in 2012 for gold prices. This indicates that buyers of gold bullion are starting to want slightly more than is available.” While Cekerevac cautions that the market for gold bullion is still not yet completely bullish on this one positive occurrence, it is a sign to watch the upside range for a breakout. “We would need to see a break above the recent trendline. Many traders and funds are watching $1,700 for gold prices as a key level,” suggest Cekerevac. “A break above that would signify that there is a large amount of demand, which would propel gold prices higher.”Profit Confidential, which has been published for over a decade now, has been widely recognized as predicting five major economic events over the past 10 years. In 2002, Profit Confidential started advising its readers to buy gold-related investments when gold traded under $300 an ounce. In 2006, it “begged” its readers to get out of the housing market...before it plunged.Profit Confidential was among the first (back in late 2006) to predict that the U.S. economy would be in a recession by late 2007. The daily e-letter correctly predicted the crash in the stock market of 2008 and early 2009. And Profit Confidential turned bullish on stocks in March of 2009 and rode the bear market rally from a Dow Jones Industrial Average of 6,440 on March 9, 2009, to 12,876 on May 2, 2011, a gain of 99%.To see the full article and to learn more about Profit Confidential, visit www.profitconfidential.com.Profit Confidential is Lombardi Publishing Corporation’s free daily investment e-letter. Written by financial gurus with over 100 years of combined investing experience, Profit Confidential analyzes and comments on the actions of the stock market, precious metals, interest rates, real estate, and the economy. Lombardi Publishing Corporation, founded in 1986, now with over one million customers in 141 countries, is one of the largest consumer information publishers in the world. For more on Lombardi, and to get the popular Profit Confidential e-letter sent to you daily, visit www.profitconfidential.com.Michael Lombardi, MBA, the lead Profit Confidential editorial contributor, has just released his most recent update of Critical Warning Number Six, a breakthrough video with Lombardi’s current predictions for the U.S. economy, stock market, U.S. dollar, euro, interest rates and inflation. To see the video, visit http://www.profitconfidential.com/critical-warning-number-six.Profit Confidential is Lombardi Publishing Corporation’s free daily investment e-letter.Profit Confidential 350 5th Avenue, 59th Floor New York, NY 10118

You can edit or delete your press release Gold Poised for a Breakout, Commodity Report by Leading Financial Newsletter Profit Confidential here