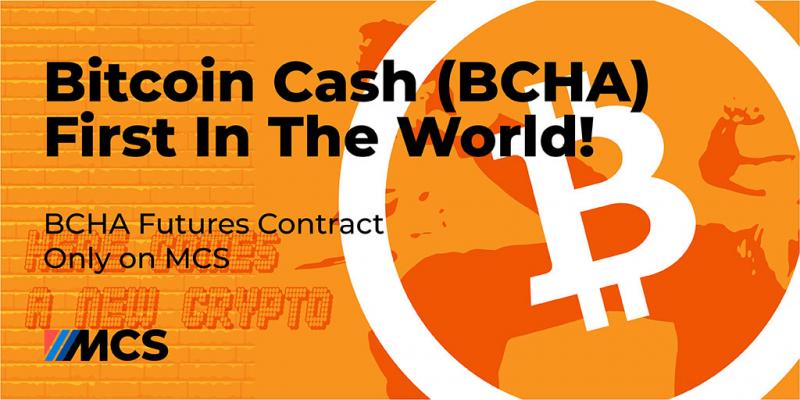 Singapore, November 19, 2020 -- MCS (MyCoinStory), a global cryptocurrency derivatives exchange headquartered in Singapore, announced on November 18 that it has launched the world’s first Bitcoin Cash ABC (BCHA) futures and The Midas Touch Gold (TMTG) futures contract products.Bitcoin Cash ABC is a cryptocurrency of a blockchain that had been hard forked at block 661648 on the Bitcoin Cash (BCH) network. Bitcoin ABC, a major development camp of the existing Bitcoin Cash (BCH), and BCHN, a miner camp, confronted over the adaptation of the 'Coinbase Rule' (a rule that compulsory allocates part of the mining rewards to the wallet designated to sponsor development funds). Both parties could not come to a consensus, resulting in a split. As a result, the BCHN camp's overwhelming share of hash rate was secured, and the existing BCH ticker was succeeded by the BCHN chain, and the BTCA chain's Bitcoin Cash ABC became the currency of the new chain. Since derivatives of Bitcoin Cash ABC has not been listed on any of the major cryptocurrency derivatives exchange such as BitMEX, Binance, and Bybit, this listing of Bitcoin Cash ABC indicates that MCS responds quickly to market trends and listens to investors.After a successful launch of its first futures in September, The Midas Touch Gold (TMTG) launched a futures product again on MCS. As TOM (Touch of Midas), a DeFi coin by TMTG, is attracting great attention from the market, more and more traders are showing great interest in TMTG, and the launch of second TMTG futures on MCS is good news for its holders since they can utilize various trading strategies to hedge price volatility. According to the official from MCS, the trading platform got many new traders thanks to the recently launched KLAY perpetual contract and the LUNA futures contract which were also the world’s first. MCS team expect a surge in the number of traders this time because Bitcoin Cash ABC became the talk of both cryptocurrency and non-cryptocurrency traders all around the world. MCS Team quoted “MCS, a derivatives trading platform that can utilize cryptocurrency volatility as an investment strategy, will continue to provide good products like Bitcoin Cash ABC and TMTG faster than others for the traders.”MCS is launching “hot” cryptocurrencies such as Bitcoin Cash (BCH), Chainlink (LINK), Klay (KLAY), LUNA (LUNA), SUN (SUN), The Midas Touch Gold (TMTG), and has the most Bitcoin-settled products after BitMEX, the industry leader. MCS is currently holding a deposit event which gives the Bitcoin bonus up to USD 1,200 and the LUNA futures trading competition with a prize pool of 60,000 LUNA.MKT Partners Ltd. Rm5, 2nd Fl, Olivier Maradan Building, Olivier Maradan St, Victoria, Mahe, Seychelles. (P.O Box 2009). josephc@mycoinstory.comMCS (MyCoinStory)MCS (mycoinstory.com) is the next-generation cryptocurrency perpetual contract trading platform created by experts from the financial and blockchain industries.Together with a team of experts, MCS is walking side by side with traders' to access financial freedom in the best way possible by creating a reliable trading environment for traders which includes enterprise-level IT systems, multilingual online customer support, and a partnership with the industry-leading digital asset custodial company, 'BitGo'. MCS is constantly improving its trading platform for traders so that traders can dream of a better future. As the slogan #Be_a_Trader shows, MCS is focused on giving every trader in the platform the authentic 'trading' experience through various features and training materials.

08-21-2020 | Business, Economy, Finances, B …
MKT Partners Ltd.
MCS Launches an “Up-to-30% Extra Bitcoin Deposit Bonus” Event
MCS (MyCoinStory), the next-generation Bitcoin perpetual contract trading platform, announced the “Jackpot Bitcoin Deposit Event” until this August 27. The event offers a bonus of up to 30% of the deposit amount, and anyone can in two ways. 10% of every deposited amount is given to the depositor as a bonus that can be used for trading during the event. Also, a bonus of up to 20% of the deposit amount
06-29-2020 | Business, Economy, Finances, B …
MKT Partners Ltd.
MCS Holds A 140%-Better Trading Fee Event, The Record-breaking Increase In The I …
MCS (MyCoinStory), a digital asset (cryptocurrency) trading platform that serves BTC/USDT perpetual contracts, will hold a special trading fee event starting June 29 for two weeks. □ 140% on Maker Rebates, the industry's largest increase From 3 am, June 29, 2020, to 3 am, July 13, 2020 (UTC), all MCS traders can receive a 0.035% maker rebate, which is 140% of the original rate. This is the largest increment in the industry. □
05-20-2020 | Business, Economy, Finances, B …
MKT Partners Ltd.
A New Cryptocurrency Derivatives Exchange Beats the Top 3 in Trading Volume
Seychelles, May 20, 2020 -- MCS (MyCoinStory.com), a new cryptocurrency derivatives exchange recently hosted a BTC/USDT perpetual contract mock trading competition and recorded trading volume higher than Bybit, one of industry's top 3 players. A total of 867 traders from 73 countries participated in fierce competition. According to the MCS BTC/USDT Mock Trading Competition Report, the total trading volume of Bitcoin perpetual contracts during the competition period counted approximately 2.7 Billion