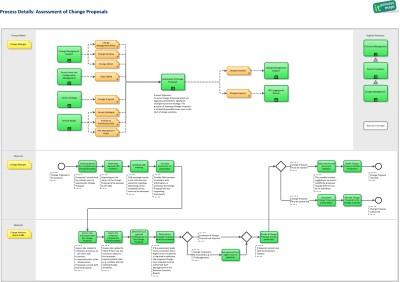 Pfronten, 13 April 2012IT Process Maps, located in Bavaria and specialized in the development of process models for the IT organization, has launched the official version of the ITIL® Process Map 2011 Edition onto the market.The ITIL® Process Map "translates" ITIL into an easily comprehensible process model which demonstrates how ITIL® functions and how the individual elements interact. It thus helps companies overcome initial difficulties when launching an ITIL initiative and to implement ITIL faster and at lower cost, with less reliance on expensive consultants.Following the publication of ITIL Edition 2011 in July 2011, the ITIL® Process Map was revised and expanded. "Although, as the authors emphasize, the concepts of ITIL 2011 are not entirely new, there are a number of substantial changes – and some of these have made extensive adaptations to the ITIL process model necessary", explains Stefan Kempter, owner-manager of IT Process Maps.After nine months the update of the ITIL® Process Map as well as the thorough examination performed by the APM Group Ltd. (http://www.apmgroupltd.com) are now completed. The ITIL® Process Map has again passed the official review by APMG successfully and been awarded the "ITIL® Licensed Product" logo.The ITIL® Process Map is available in English and German for the most widely used process management applications, like Microsoft Visio™, the ARIS Process Platform™ and iGrafx®. The ITIL process model is 100% compatible with ITIL 2011 and ISO 20000:2011, covering the complete ITIL 2011 Service Lifecycle.For further information on the ITIL® Process Map: - http://en.it-processmaps.com/products/itil-process-map.htmlThe ITIL process model for Microsoft Visio™ (ITIL 2011 Edition): - http://en.it-processmaps.com/products/itil-process-map-visio.htmlYou will find a list of the most important differences between ITIL V3 (2007) and ITIL 2011 in the IT Process Wiki under - http://wiki.de.it-processmaps.com/index.php/ITIL_2011.About IT Process Maps GbR:IT Process Maps was founded in 2006 by Stefan and Andrea Kempter as a privately held company in Bavaria, Germany. Its focus is on the provision of process know-how "out of a box" for IT organizations. The company's flagship product, the "ITIL Process Map", is a unique ITIL Reference Process Model, used by leading businesses worldwide from a broad spectrum of industries to successfully implement ITIL and ISO 20000.Until today, IT Process Maps stands out in the marketplace for its commitment to provide ITIL Process Models for the most widely used BPM platforms. Customers can either use their familiar office applications (like Microsoft Visio™) or professional BPMN platforms like ARIS™ or iGrafx® to support their ITIL and ISO 20000 initiatives.IT Process Maps customers include government agencies like Australian Defence Force, Federal Trade Commission (USA), US Navy and UK Environment Agency. A large number of international companies use the ITIL Process Map, e.g. Boeing, Nokia, AMEX, Swiss Re, BT and Bombardier Transportation.IT Process Maps forged a number of partnerships in order to be closer to its customers from different parts of the world: USA, Australia, Middle East, UK, Switzerland and Scandinavia.As part of its presence on the Internet, IT Process Maps also offers a highly frequented ITIL Wiki (http://wiki.en.it-processmaps.com) in English, German and Spanish with everything you need to know on ITIL processes, roles, and ITIL glossary terms. The ITIL Wiki also includes a complete ITIL implementation guide and a collection of ITIL document templates.More on IT Process Maps: http://en.it-processmaps.com Legal Notice: http://en.it-processmaps.com/sp/it-process-maps-impressum.htmlTrademarks: ITIL® is a Registered Trade Mark of the Cabinet Office in the United Kingdom and other countries. - "ARIS" and "ARIS Process Platform" are registered trademarks of Software AG. "iGrafx" is a registered trademark of iGrafx LLC. "Microsoft" and "Visio" are registered trademarks of Microsoft Corp.IT Process Maps GbR Am Hoernle 7 87457 Pfronten Germany Web: http://en.it-processmaps.com Contact: http://en.it-processmaps.com/contact/it-process-maps-international.html Email: info@it-processmaps.comPresscontact: Dr. Andrea Kempter Tel. +49-8363-927396 Fax +49-8363-927703

06-14-2012 | IT, New Media & Software
IT Process Maps GbR
New: ITIL 2011 and the ISO 20000:2011 Standard now Connected
Pfronten, 13 June 2012. The new version of the ITIL® - ISO 20000 Bridge helps IT organizations and IT Service Providers to develop ITIL 20000 compliant processes and serves as a guideline during the preparation for the ISO 20000:2011 certification audit. In a highly competitive market, many IT service providers take advantage of the opportunity to prove their capabilities in the field of IT Service Management by seeking an ISO 20000
04-05-2012 | IT, New Media & Software
IT Process Maps GbR
The Well-Reputed ITIL Process Model Now With Official ITIL®-2011 Licence
Pfronten, 2nd April 2012. IT Process Maps, located in Germany’s south and specialized in the development of process models for the IT organization, has again obtained the APMG accreditation: Their products have once again been awarded the "ITIL® Licensed Product" logo. A significant milestone in the update of the renowned ITIL Process Model to ITIL® 2011 and ISO/IEC 20000:2011 has been reached. As one of the final steps in the adaptation to
08-12-2011 | IT, New Media & Software
IT Process Maps GbR
The ITIL® Process Map now with official ITIL® Licence
IT Process Maps has been awarded by APMG with the ITIL® Licensed Product Logo for its ITIL® Process Map and the ITIL® - ISO 20000 Bridge. IT Process Maps, a company based in Bavaria, Germany, specializing in the provision of ITIL know-how in the form of process models, has successfully completed a thorough review of its ITIL Reference Process Model by APM Group. As a result, the ITIL® Process Map and
11-16-2010 | IT, New Media & Software
IT Process Maps GbR
The well-established ITIL Reference Model now also for Visio 2010
Pfronten, 15th November 2010. A fresh approach to implementing ITIL: IT Process Maps GbR, the provider of IT process know how in easily accesible formats, presents its new version of the ITIL Process Map V3 for Microsoft Visio(TM) 2010 with a number of substantial improvements. The ITIL® Process Map is a 'translation' of ITIL into legible, easy to read process maps in Visio and other process management platforms. This has been

12-20-2021 | IT, New Media & Software
Knowlathon IT Services Pvt. Ltd
Best ITIL certifications for 2021
At a company, the managing director had an idea: one of their products was very popular pre-covid, but sales showed otherwise through the pandemic. The idea was to create a mini version of that product and pitch it at an appropriate price point. The chief objection to the original product, during the pandemic, was that it was too bulky, required upfront storage, and people were reluctant to invest in it
07-20-2018 | Business, Economy, Finances, B …
Vinsys IT services (I) PVT LTD
ITIL Foundation Certification Training in Pune | ITIL Foundation Course | Vinsys
Vinsys, one of the leaders in imparting training for specialized IT and management level courses is ISO 9001:2015 certified. It has an impressive legacy of training aspirants and working professionals in various countries successfully, which extends over 2 decades. The corporate training provider conducts workshops and specially developed training modules pertaining to niches like IT Governance, IT Service Management, Project Management and ITes. It has trained more than 600000 professionals
06-29-2018 | Business, Economy, Finances, B …
Vinsys IT services (I) PVT LTD
ITIL Foundation Certification Training in Pune | ITIL exam in Pune | Vinsys
The IT Infrastructure Library (ITIL®) is the most widely accepted approach to IT service management in the world. ITIL Foundation is the most widely recognized entry-level Certification for IT professionals which offers a general awareness of the key elements, concepts, and terminology used in the ITIL Service Lifecycle. Vinsys IT service has announced ITIL Foundation Certification Training in Pune on 18 and 19 August 2018. The holder of ITIL Foundation Certificate
02-26-2018 | Business, Economy, Finances, B …
Vinsys IT services (I) PVT LTD
ITIL Singapore
ITIL Singapore Certification Training at Vinsys. Get ITIL Training with EXIN & PeopleCert Accredited ITIL Certification Training with IT Tactic of Business Vision ITIL Singapore. ITIL Foundation Singapore is the most widely recognized entrance-level ITIL certification for IT professionals. IT departments need qualified specialists who can carry effective IT services. This ITIL Singapore training will show you the ITIL Singapore services lifecycle, how lifecycle steps are linked, processes elaborate, and finest
07-03-2017 | IT, New Media & Software
ITIL News
ITIL Directory Update
ITILnews have updated their ITIL Vendor Directory, which is free for companies actively providing; - ITIL Consultancy - ITIL Training - ITIL Books - ITIL Software - ITIL Recruitment Companies may have a Directory entry for each country where they have a physical office location. APPROVED VENDOR entries When a directory entry is marked as an APPROVED VENDOR, this means we have communicated directly with the supplier and have collected at least five customer testimonials. PARTNER entries When a directory
04-05-2012 | IT, New Media & Software
IT Process Maps GbR
The Well-Reputed ITIL Process Model Now With Official ITIL®-2011 Licence
Pfronten, 2nd April 2012. IT Process Maps, located in Germany’s south and specialized in the development of process models for the IT organization, has again obtained the APMG accreditation: Their products have once again been awarded the "ITIL® Licensed Product" logo. A significant milestone in the update of the renowned ITIL Process Model to ITIL® 2011 and ISO/IEC 20000:2011 has been reached. As one of the final steps in the adaptation to
Comments about openPR
Your portal is fast, simple, and easy to use. Others may have more functions but they also demand more editing time, you have to preformat the text in order to achieve a good result etc. I think openPR is really fantastic!
Andreas Knepper, wallmedien AG