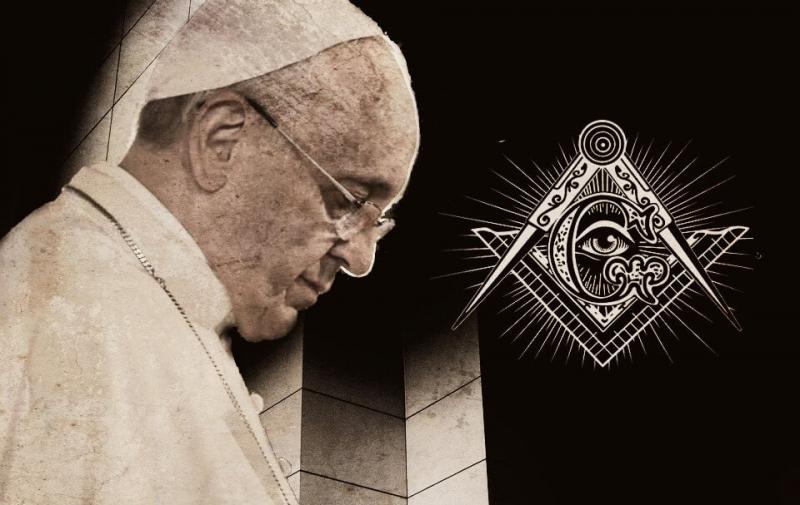 The Masonic Order has just revealed how close Pope Francis’ most recent encyclical is to the ideals of Freemasonry. These words were expressed in a report that was published by the Grand Lodge of Free Masonry in Spain, as they openly support Pope Francis’ call for a universal brotherhood. [1] The Pope’s latest encyclical called Fratelli Tutti calls on political and religious leaders to create a new universal brotherhood to help overcome our differences. [2] And the Masons are celebrating the new document.https://twitter.com/ElOrienteGLE/status/1313007157495894018?s=20The above tweet published by the Masonic Order in Spain says: “Fratelli Tutti is the last encyclical of @Pontifex_es in which it embraces the Universal Fraternity, the great principle of #Modern Masonry.”Freemasonry is saying publicly that they are in favor of the latest papal encyclical. What does this tell you? It tells us that Pope Francis is promoting Masonic teachings. The Pope’s ecumenical teachings on brotherhood are based on Masonic principles, and it should come as no surprise that Freemasons are in love with it.The Masons are working with their Master Mason, the Jesuit Pope Francis, to achieve their goal. The plan is to delegitimize the Christian faith and show that God’s revealed truth found in the Bible is not necessary. The Pope speaks of a common destiny and of the need for us to be equal in our diversity. This does not lead us to a fellowship (fraternity) with Christ, but to the kingdom of the Antichrist.“Cut yourself loose from the Free Mason lodge, and all that relates to the society. It was not safe for you to have any part with this secret order. Those who stand under the blood-stained banner of Prince Emmanuel cannot be united with the Free Masons or with any secret organization. The seal of the living God will not be placed upon any one who maintains such a connection after the light of truth has shone upon his pathway.” (Letter 21, 1893).Why would Seventh-day Adventists join the Chief Master Mason, Pope Francis? Why would we participate in the Masonic ecumenical movement in Rome? There is no justification Adventists can give for being a part of this. For years top Seventh-day Adventist Church leaders have been engaged with the modern ecumenical movement, and every day it is becoming more evident that Rome’s interfaith unity movement is promoting diabolical Masonic heresies. And those who continue to participate, promote or justify these engagements will NEVER receive the seal of God.The ecumenism of St. Francis of Assisi was the inspiration for Pope Francis’ encyclical on the universal brotherhood (Fratelli Tutti). All of this is part of the Masonic plan to establish a great temple of universal brotherhood that goes beyond doctrine, beliefs and sacred writings. This is the “unity in diversity” promoted by the Luciferian, Masonic New World Order.“And they worshipped the dragon (Satan) which gave power unto the beast: and they worshipped the beast, saying, Who is like unto the beast? who is able to make war with him?” Revelation 13:4.Sources[1] https://mailchi.mp/gle/eloriente169-938721-8m0qlkm9r6-939922[2] http://adventmessenger.org/the-new-papal-encyclical-calls-for-the-creation-of-a-new-universal-brotherhood-to-help-overcome-religious-differences/Contact: Andy Roman, Publisher Address: Advent Messenger, PO Box 96, Dover, OK 73734 Phone: (888) 299-2119 Website: www.adventmessenger.org Email: adventmessengers@gmail.comAbout: Advent Messenger provides news and commentary on current events, top stories, social trends and political and religious events. For more news visit www.adventmessenger.org

03-25-2019 | Business, Economy, Finances, B …
Market Research Future
Vitamin B Market Analysis by Global Leaders Nature's Bounty, Sanofi SA, Country …
Market Definition: B Vitamins are group of nutrients that play a vital role in human body. Vitamin B is used to prevent infections, increase metabolism, and also to help in proper nerve function. Thus, Vitamin B market is expected witness high growth in forecast period. Get a Free Sample of This Report @ https://www.marketresearchfuture.com/sample_request/7133 Market Potential and Pitfalls: Based on type, the global vitamin B market has been segmented into vitamin B1 (Thiamine), vitamin
09-14-2018 | Business, Economy, Finances, B …
WISE GUY RESEARCH CONSULTANTS PVT LTD
Hairbrush Global Market 2018: Key Players – Mason Pearson, Braun, Goody, Tangl …
Hairbrush Industry Description Wiseguyreports.Com Adds “Hairbrush -Market Demand, Growth, Opportunities and Analysis Of Top Key Player Forecast To 2023” To Its Research Database This report studies the global market size of Hairbrush in key regions like North America, Europe, Asia Pacific, Central & South America and Middle East & Africa, focuses on the consumption of Hairbrush in these regions.  This research report categorizes the global Hairbrush market by players/brands, region, type and application. This
07-26-2018 | IT, New Media & Software
HTF Market Intelligence Consulting Pvt. Ltd.
Forestry Software Market Is Thriving Worldwide with BCS Software, Baywood Techno …
A new business intelligence report released by HTF MI with title “Global Forestry Software Market Size, Status and Forecast 2025” that targets and provides comprehensive market analysis with future prospects to 2023. The analysts of the study have garnered extensive research methodologies and data sources (i.e Secondary & Primary Sources) in order to generate collective and useful information that delivers latest market undercurrents and industry trends. Request Sample Report @:
06-11-2018 | Business, Economy, Finances, B …
ARS Steels and Alloy International Pvt. Ltd
ARS Steel organized mason meet
Chennai: Tamil Nadu’s leading company ARS Steel organized Mason Meet at Kolathur, Chennai to make the masons aware of the advanced techniques and their newly launched products. During the meet, the masons, who are considered the backbone of the construction industry learned about the latest advancements and technologies booming in the infrastructure sector. Besides, they were informed about the benefits of using superior quality steel products that would lead to
06-01-2018 | Advertising, Media Consulting, …
MarketResearchReports.biz
Mason Jars Market Current Trends & Future Growth, Forecast 2017 - 2025
The report "Mason Jars Market - Global Industry Analysis, Size, Share, Growth, Trends, and Forecast 2017 - 2025 ", has been prepared based on an in-depth market analysis with inputs from industry experts. The objectives of this study are as follows: To define, describe, and forecast the "Mason Jars" market by type, application, component, delivery model, end user, and region To provide detailed information regarding major factors influencing market growth (drivers, restraints, opportunities,
04-23-2012 | Politics, Law & Society
Gardere Wynne Sewell
Gardere Litigation Chair Richard Faulk to Discuss Scientific Evidence at George …
HOUSTON – Richard O. Faulk, Chair of the Litigation Department of Gardere Wynne Sewell LLP, will be a featured luncheon speaker on “Perspectives on Daubert” during the three-day Judicial Symposium on Scientific Evidence in the Courts hosted by the George Mason University School of Law at the Mason Inn Conference Center and Hotel in Fairfax, Va. In addition to his April 24 luncheon speech, Mr. Faulk will moderate panel discussions
Comments about openPR
OpenPR ist the nicest and most clearly laid out PR platform I have seen to this day. The press releases are displayed very nicely and clearly and without any unnecessary frills. The updates are fast and the finished release looks appealing and is clearly legible. Even with 16 years of experience one discovers new things from time to time. Congratulations!
Gabriele Ketterl, Director Marketing & PR, Menads