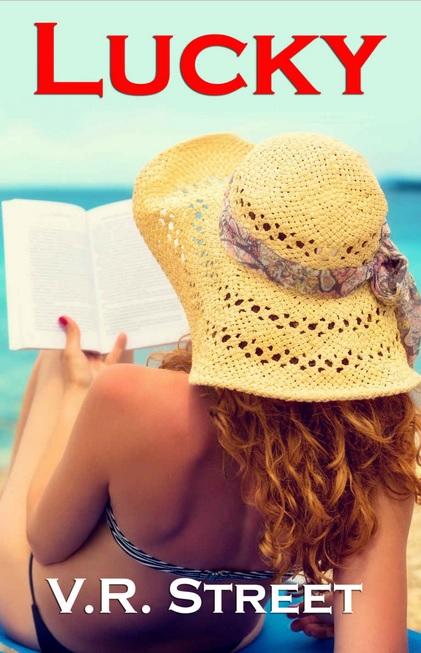 Lucky: An Addictive Chick Lit Novel By V. R. StreetAuthor V. R. Street is pleased to announce the promotion of her chick lit novel, Lucky. Dive into the book that readers are finding impossible to put down.Kat Davidson bought the ticket on a whim…she never expected to win.Will $200 million dollars ruin her life?At 34, what Kat really wants is to start a family. Her husband, Michael, only wants to be a famous actor. After winning the lottery, life seems perfect – until they get the reality TV show offer.Maria Gonzales, the ambitious TV producer of Lucky, knows the show will be her ticket to ratings gold – as long as she can amp up the drama between Kat and Michael.Drama is the last thing Kat wants.It's not easy, becoming famous. People stop them on the street. Women throw themselves at Michael. It's not the life Kat pictured when she fantasized about being rich.Winning the lottery flings Kat into a life of luxurious Manhattan mansions, exotic beaches, extravagant sports cars and fabulous clothes.But will she find the strength she needs to win the life she really wants?Lucky is available for purchase in print and ebook format. Book Details: Lucky By V. R. Street ISBN: 978-1694810281 ASIN: B07Y7JYWPF Pages: 400 Genre: Chick LitAbout the Author: V. R. Street lives in a New York City suburb with her husband, daughter, son and a cheeky cat named Bob.Lucky is her first novel, although she has published three nonfiction titles under a different name. The idea for Lucky came from fantasizing about winning the lottery and wondering what it would be like if a reality TV series was shot about lottery winners. Since writing this book, HGTV has come out with a show called My Lottery Dream Home. Sometimes life imitates fiction!When not writing, V. R. works for a sports broadcasting company. In 2017, she was the winner of an Emmy for her work on the 2016 Summer Olympics.Contact: Facebook: https://www.facebook.com/by.v.r.street Promo Link: http://bookbuzz.net/blog/chick-lit-lucky/#chicklit #vrstreet #Lucky #bookbuzzBookBuzz.net 59 Heritage Way Drive Rome, GA 30165Website: https://bookbuzz.net/blog/chick-lit-lucky/BookBuzz.net helps indie authors, hybrid authors, and small publishers promote and market their books. We also help with book reviews, publicity, and more. Let's Create Some Buzz For Your Book!!!

You can edit or delete your press release Lucky: An Addictive Chick Lit Novel By V. R. Street here

03-11-2016 | IT, New Media & Software
Ozura Firstlogix Sdn Bhd
Bello2 Lucky Price
KUALA LUMPUR, 10 March, 2015 – Bello2, Malaysia’s largest online beauty and wellness marketplace launches the anticipating bidding contest of Lucky Price today. Following the success of Mad November and All About Valentine campaigns, Bello2 aims to continue amusing online consumers with the all-new Lucky Price. The latest campaign is an exclusive bidding game for Bello2 members to participate in grabbing the opportunity to buy their chosen deals or beauty products
09-27-2011 | Business, Economy, Finances, B …
Lucky Wishbone
Lucky Wishbone Expanding with New Store in Sierra Vista
(Sierra Vista, AZ) Despite the sluggish economy, Lucky Wishbone is pleased to announce a new location opening in Sierra Vista, their first location outside of Tucson since they opened almost 60 years ago. Customers can get Lucky Wishbone’s famous steak fingers and fried chicken when they open later this year at 1287 E. Fry Blvd. This opening will be the 3rd new opening for Lucky Wishbone since 2008. “We’re really
04-20-2011 | Tourism, Cars, Traffic
Hannover Adventure Zoo
Prickly characters and lucky bags at Hannover Adventure Zoo
Barbary lion offspring and a dark secret on the banks of the Zambezi. Majestic eagles and clever coati in the Show Arena. Mini elephants taking part in mother-baby exercises in the Jungle Palace, a bag of surprises in the Outback: Hannover Adventure Zoo presents animal attractions in seven unique zoo worlds for the new season. Barbary lion offspring: royal prickly characters Prickly and stubborn, the royal offspring of the Barbary lion have
02-22-2011 | Fashion, Lifestyle, Trends
GSEA Group, Inc.
Rosa Acosta Needs a Lucky Charm to Give Back
New York, NY: February 21, 2010 – Dominican model, Rosa Acosta announced via Twitter a new contest: Who Really Has What it Takes to be Rosa Acosta’s Lucky Charm? The winner of the contest, to be picked by Rosa herself, wins a one on one date with the video vixen. To enter, contestants must “twit pic” a photo of themselves holding Rosa’s 2011 DVD or calendar along with their most
11-09-2010 | Media & Telecommunications
MMORPG
Tales of Fantasy: Lucky Shoehorses
In Tales of Fantasy, where an added edge in battle can ascertain to be the difference between life and death, it's essential to make sure your horse is equipped with a set of good horseshoes to further augment and improve their abilities! It's not as universally known nowadays, but hundreds of years ago it was common knowledge that a good horse wasn't worth much without a good set of horseshoes. Ever
10-03-2010 | Tourism, Cars, Traffic
CoinForge LLC
A lucky day for state parks.
Ten states now have the popular State Park app available in the Apple app store. With the release of the tenth state (Utah), the company is celebrating by giving away 100 free copies of their apps. Utah joins Alabama, Alaska, California, Delaware, Florida, Idaho, New Mexico, Ohio and Oregon as the current apps that are now available for sale. To celebrate the milestone, CoinForge LLC will be giving away 10 free copies
Comments about openPR
OpenPR is clearly structured and remains true to its principle of confining itself to the essential parts. OpenPR has proven to be a very good and reliable partner to our media agency: Within the shortest time the releases are online and go down well with the media representatives. The success of OpenPR is reflected in the steadily increasing number of press releases. It is good that OpenPR exists!
Ursula Koslik, Director Marketing & PR, F+W Hamburg