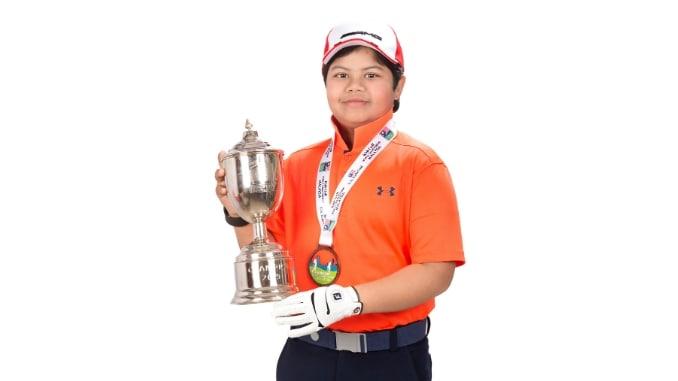 Chaitanya Pandey finds the present time most appropriate to celebrate the anniversary of his triumph at the European Championship held in Scotland last year.With the world in lockdown amid the COVID-19 pandemic, one of the casualties has been sports which had to take a back seat due to government-imposed travel restrictions and new laws on social distancing. Golf has been one of the sports most affected with courses shut up.One such golfer has been rising Indian star 8-year-old Chaitanya Pandey, whose meteoric rise to the top of his sport has been halted by the global COVID-19 pandemic. Fortunately, the boy who has been compared to a young Tiger Woods, and who been described by the Indian Minister of Sport, Kiren Rijuju, as part of India’s future and one of the world’s best young players has time on his side, and it will not be long before he is striding the fairways and the greens again on the way to yet another brilliant title win.In the meantime, celebrating his European win anniversary, it seems an appropriate time to relive some golden memories when Chaitanya travelled to Longniddry in Scotland last year and returned home triumphant with the European Championship in his possession.Chaitanya Pandey went to Scotland as one of the youngest in a glittering field of featuring competitors from Asia, Africa, South America and Europe, as well as the substantial home-based contingent.And, for many of them, the Longniddry course, which is famed for its difficulty, posed a unique set of challenges with hundreds of trees lining the course, deep bunkers and the adverse weather conditions.And Chaitanya Pandey certainly had to contend with all that the famous old course could throw at him over the three days of the tournament. Friday was the best day weather-wise and Chaitanya took full advantage scoring a superb 30, which was 6 under par for the 9-hole course, enough to earn him a share of the lead with one of his closest rivals from Thailand.On Saturday, things got tougher and Chaitanya could only score a par 36, still highly respected in the circumstances, but with Thailand rival managing a two-under-par score, Chaitanya had slipped to second in the overall standings.However, the final day Sunday was to prove decisive. Not only were the conditions difficult again, particularly playing shots into the wind and heavy rain, but pressure also began to play its part, particularly in the case of Thai rival who shot six over par to end his chances. Chaitanya meanwhile kept his nerve and composure superbly, continued to find the fairways from the tee, and made sure that his putting was up to its usual brilliant best.He shot par again, the third-best round of the day, and enough to give him a marvellous and thoroughly deserved victory by two shots from the South African Lex Foxcraft. It was the biggest success of his fledgeling career to date and made him the youngest Indian to win the European title.Typically modest after his record-breaking win, Chaitanya was quick to praise those who had helped him achieve such success at an early age, including his coach Romit Bose and Aditya Sachdeva who prompted him to play golf, the Delhi Golf Club, especially its President, Mr RS Bedi and Captain, Rohit Sabherwal, and his school K R Mangalam World School. Above all though, his gratitude was reserved for his parents without whose tireless support and devotion, none of his achievements would be possible.Since then he has won a number of major events maintaining his pole position in India in Indian golf Union merit list, US Kids Golf India and finished third in the Kids’ World Championship in Malaysia.Unfortunately, due to the Covid-19 pandemic, he will not get a chance to defend his European title this year that has had to be postponed for a year, along with many of the other major championships in the United States he was due to compete in later this year, including the IMG World, FCG Callaway, and US Kids’ World Championships, which were all scheduled to be staged in the USA.However, when play does resume, it is a certainty that Chaitanya will once again be amongst the favourites to win all the big titles.349, 1st Floor, Sector 19, Pocket B, Dwarka‘Free Voice With A Critical Edge‘ is what describes Digpu News Network best. Our journalists and writers cover diverse stories from different parts of the country and the world. Our opinions are the voice to our concerns, suggestions, critical analysis and unattended stories that deserve immediate attention.

12-21-2021 | Business, Economy, Finances, B …
Digpu News Network
Marie Claire Paris Launches its first Salon & Wellness in Lucknow
Marie Claire Paris, the exclusive French lifestyle brand that forayed into the Indian beauty and wellness sector with the launch of its Salons, Just Nails studio and Salon & Wellness centres in Bangalore, Hyderabad, Pune, Chennai, New Delhi, Vadodara, Mumbai and Patiala now launch-es its first franchised Salon & Wellness outlet in the city of Lucknow at Aashiyana. The Salon & Wellness, which is Marie Claire Paris’ first outlet in Lucknow,
11-21-2021 | Science & Education
Digpu News Network
Students enrolling at NBS take away more than just a degree
Ahmedabad-based Narayana Business School (NBS) has positioned itself as a premier MBA school that offers students much more than what they learn academically. With a vision towards ushering in an innovative learning methodology, cultivation of practical skills and an unwavering commitment to academic quality, the Ahmedabad-based Narayana Business School (NBS) is positioning itself as a premier MBA school that offers students much more than what they learn academically. Narayana Business School, which
11-16-2021 | Energy & Environment
Digpu News Network
Tiruvannamalai District in Tamil Nadu Sets World Record with 1118 Farm Ponds in …
The aim behind the initiative to create 1118 farm ponds was to ensure adequate water for agriculture purposes during the summer. District Rural Development Agency in Tiruvannamalai district has accomplished a world record in setting up 1118 farm ponds to farmers, workers covered under MGNREGS (Mahatma Gandhi National Rural Employment Guarantee Scheme) got a continuous job for over 30 days to create this farm pond and the district walked into record
10-29-2021 | Media & Telecommunications
Digpu News Network
The Bible Explained: Shincheonji Church of Jesus starts weekly global seminar
Beginning with Chairman Man Hee Lee’s audacious declaration, a round of weekly seminars titled 'Testimony on Prophecy and Fulfillment of Revelation, God's New Covenant' from October 18th to December 27th is held by Shincheonji Church of Jesus, the Temple of the Tabernacle of the Testimony. Chairman Man Hee Lee said, "The meanings of the prophecy (of Revelation) and what is fulfilled in reality according to the prophecy is what I am

05-28-2021 | Advertising, Media Consulting, …
Global Market Insights Inc.
Plant Protein Ingredients Market Trends and Industry Forecast 2026 | Top Players …
Market Overview: - The global Plant Protein Ingredients market is valued at 5.5 Billion USD in 2019 and is expected to reach 8 Billion USD by the end of 2025. Global Market Insights has recently published a study titled 'Global Plant Protein Ingredients Market Research Report'. In this report, analysts have provided a detailed evaluation of the global Plant Protein Ingredients market. The report is inclusive of a completely comprehensive study of
11-20-2018 | Advertising, Media Consulting, …
Garner Insights
Soy Sauce Powder Market 2018 Overview : Nikken Foods, Shanghai Hensin Industry, …
Industry Overview of Soy Sauce Powder Market: The fundamental purpose of this Soy Sauce Powder report is to provide a correct and strategic analysis of the Profile Projectors industry.  The report scrutinizes each segment and sub-segments presents before you a 360-degree view of the said market.It provides a deep insight into the industry parameters by accessing the market growth, the consumption volume, the upcoming market trends, and the different prices variation for the forecast year
11-12-2018 | Business, Economy, Finances, B …
Supply Demand Market Research
Sodium Hydrosulfide Market Outlook to 2025 - Leading Companies Tessenderlo Group …
Global “Sodium Hydrosulfide Market” has adopted a systematic way to evaluate the dynamics of the overall market. It provides a comprehensive study comprising of a top-to-bottom research on the market dynamics, including growth drivers, challenges, threats, and potential growth opportunities, with a key focus on not only the global market but also the regional market. In a chapter-wise format, the report evaluated the global supply and demand trends in the
04-23-2018 | Business, Economy, Finances, B …
Apex Market Reports
Global Sodium Hydrosulfide Market 2018 - Akzo Nobel, Sankyo Kasei, Nagao, Chaita …
Apex Market Reports, recently published a detailed market research study focused on the “Sodium Hydrosulfide Market” across the global, regional and country level. The report provides 360° analysis of “Sodium Hydrosulfide Market” from view of manufacturers, regions, product types and end industries. The research report analyses and provides the historical data along with current performance of the global PP Pipe industry, and estimates the future trend of Sodium Hydrosulfide on
01-05-2018 | Health & Medicine
WISE GUY RESEARCH CONSULTANTS PVT LTD
Global Soy Protein Isolate Market 2017: Key Players – DuPont, ADM, CHS, World …
Summary WiseGuyReports.com adds “Soy protein isolate Market 2017 Global Analysis, Growth, Trends and Opportunities Research Report Forecasting to 2023”reports to its database. Soy protein isolate is a dry powder food ingredient that has been separated or isolated from the other components of the soybean, making it 90 to 95 percent protein and nearly carbohydrate and fat-free.Soy protein isolate supplies a high quality of protein that contains all essential amino acids needed for growth.
11-24-2016 | Health & Medicine
QY Market Research
Global High Selenium Yeast Market 2016 - Garuda, Probiotech, Selko, Miro Chembio …
A market study based on the "High Selenium Yeast Market" across the globe, recently added to the repository of Market Research, is titled ‘Global High Selenium Yeast Market 2016’. The research report analyzes the historical as well as present performance of the global High Selenium Yeast market, and makes predictions on the future status of High Selenium Yeast market on the basis of this analysis. Global High Selenium Yeast Industry
Comments about openPR
We publish our press releases on openPR.de because we like people who are "open" - just like us.
Frank Obels, CEO, INCONET - Informationssysteme, Communication und Netzwerkberatung GmbH