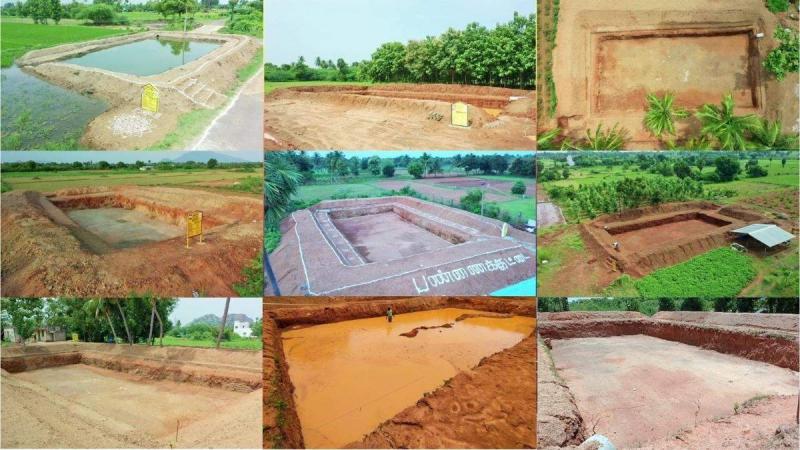 The aim behind the initiative to create 1118 farm ponds was to ensure adequate water for agriculture purposes during the summer.District Rural Development Agency in Tiruvannamalai district has accomplished a world record in setting up 1118 farm ponds to farmers, workers covered under MGNREGS (Mahatma Gandhi National Rural Employment Guarantee Scheme) got a continuous job for over 30 days to create this farm pond and the district walked into record books in the category “Most Farm Ponds Created at Multiple Locations in 30 Days”. This feat was certified as a world record by Elite World Records, Asian Records Academy, India Records Academy and Tamilian Book of Records.According to District Collector B.Murugesh, with a sincere commitment to improving the groundwater potential before the onset of Monsoons in Tamil Nadu, we decided to create 1118 Farm Ponds in 541 Village Panchayats of 18 Blocks at a Unit Cost of Rs.1.78 lakhs with a total project cost of Rs.19.96 Crore within 30 days from 12.08.2021 till 10.09.2021 under the MGNREGS (Mahatma Gandhi National Rural Employment Guarantee Act).The aim behind the initiative was to ensure adequate water for agriculture purposes during the summer and hence a brainstorming session was conducted for the DRDA Team and farmers, which led to the idea of creating farm ponds. Starting with the guidance of PWD Minister EV Velu, the scheme soon caught the attention of many as the work progressed with daily monitoring, he further pointed out.M.Prathap, Additional Collector(DRDA) added that district like Tiruvannamalai in Tamil Nadu faces severe water inadequacy for agriculture during summer every year, hence we decided to initiate a project to visualize rainwater harvesting which will ensure storage of adequate water for agriculture and also to improve groundwater potential. After a devising session, we decided that the creation of farm ponds at multiple locations in the district will give a permanent solution to this.“In this context, we had a detailed Micro Level Planning at Block Level and Village Level for Identifying the apt locations for creating the farm ponds, the sites have been strategically selected at all locations which envisage recharge of groundwater as well. Rigorous Meetings and Workshops were conducted to the entire DRDA team and all the stakeholders of the project in order to educate and impart the process of creating the farm ponds. We had a three-level internal verification process to monitor the progress and execution of farm ponds,” Mr Prathap, Additional Collector (DRDA) further pointed out.I along with 10 more adjudicators and third-party ratifying agencies physically inspected 423 farm ponds in Tiruvannamalai District, each farm ponds were minimum of 72 feet in length, 36 feet in breadth and 5 feet in depth. The District administration has adhered to all the norms and regulations set by the world record team. I am sure this project has given an everlasting lively hood for farmers and the general public in the years to come. We are pleased to certify this project as a new world record, said Dr Jawahar Karthikeyan, Ambassador and Senior Adjudicator, Elite World Records. “Catch the Rain” Project by creating Farm Ponds to envisage rainwater harvesting has given a lot of faith and confidence to farmers, said Dr.A.K.Senthil Kkumar, Ambassador and Senior Adjudicator, Asian Records Academy.This Visionary Project executed by DRDA Tiruvannamalai District will be an everlasting asset to the people, it will help the standard of living of people and farmers. These farm ponds can also be used as fish ponds which will serve as an ancillary income to farmers and ensure financial stability. We are proud to certify this as a world record, said P.Jeganathan, Associate Editor and Senior Records Manager, India Records Academy.Farm Ponds had been an integral part of Tamil life. With changes in the cultural and social milieu, they lost their importance. This project has created awareness of the importance of Farm Ponds and rainwater harvesting, said Dr B.Bala Subramanian, Senior Records Manager, Tamilan Book of Records.23478 MGNREGS Workers have put their continuous efforts for 30 days and endeavoured towards making this marathon project a successful one in such a record time, which will be an everlasting asset to the district, this project has bagged a lot of appreciation on the whole.For any feedback on the content, contact: Digpu News Network 806 Amar Neptune, Pune 411045This content is distributed by Digpu News Network

12-21-2021 | Business, Economy, Finances, B …
Digpu News Network
Marie Claire Paris Launches its first Salon & Wellness in Lucknow
Marie Claire Paris, the exclusive French lifestyle brand that forayed into the Indian beauty and wellness sector with the launch of its Salons, Just Nails studio and Salon & Wellness centres in Bangalore, Hyderabad, Pune, Chennai, New Delhi, Vadodara, Mumbai and Patiala now launch-es its first franchised Salon & Wellness outlet in the city of Lucknow at Aashiyana. The Salon & Wellness, which is Marie Claire Paris’ first outlet in Lucknow,
11-21-2021 | Science & Education
Digpu News Network
Students enrolling at NBS take away more than just a degree
Ahmedabad-based Narayana Business School (NBS) has positioned itself as a premier MBA school that offers students much more than what they learn academically. With a vision towards ushering in an innovative learning methodology, cultivation of practical skills and an unwavering commitment to academic quality, the Ahmedabad-based Narayana Business School (NBS) is positioning itself as a premier MBA school that offers students much more than what they learn academically. Narayana Business School, which
10-29-2021 | Media & Telecommunications
Digpu News Network
The Bible Explained: Shincheonji Church of Jesus starts weekly global seminar
Beginning with Chairman Man Hee Lee’s audacious declaration, a round of weekly seminars titled 'Testimony on Prophecy and Fulfillment of Revelation, God's New Covenant' from October 18th to December 27th is held by Shincheonji Church of Jesus, the Temple of the Tabernacle of the Testimony. Chairman Man Hee Lee said, "The meanings of the prophecy (of Revelation) and what is fulfilled in reality according to the prophecy is what I am
07-13-2021 | Health & Medicine
Digpu News Network
Sandeep Gupta, the Nutraceutical Man of India Believes that Health has Evaluated …
According to the premier Nutritionist of the country, the four-strong Pillars of good health- Healthy Eating, Regular Exercise, Mindfulness and Supplementation offer the roadmap to upgrading our lifestyle to more healthier ways, taking our Immunity from Good to Better, Better to Best, and from Best to Robust. While India is battling the raging COVID-19 pandemic, the country’s Nutraceutical man Mr. Sandeep Gupta wishes for everyone to celebrate the spirit of Doctor’s

03-11-2019 | Advertising, Media Consulting, …
QandQ Market Research
Asia Electronic Health Records Market
https://www.qandqmarketresearch.com/reports/7633398/electronic-health-records-market-49 This report studies the Electronic Health Records. An Electronic Health Record EHR is an electronic version of a patients medical history, that is maintained by the provider over time, and may include all of the key administrative clinical data relevant to that persons care under a particular provider, including demographics, progress notes, problems, medications, vital signs, past medical history, immunizations, laboratory data and radiology reports The EHR automates access to
08-20-2018 | Business, Economy, Finances, B …
Apex Market Research
Global Vinyl Records Market 2018 - Pallas, Rainbo Records, Z Media
Apex Market Research, recently published a detailed market research study focused on the "Vinyl Records Market" across the global, regional and country level. The report provides 360° analysis of "Vinyl Records Market" from view of manufacturers, regions, product types and end industries. The research report analyses and provides the historical data along with current performance of the global Vinyl Records industry, and estimates the future trend of Vinyl Records market
02-02-2012 | Advertising, Media Consulting, …
User Centric, Inc.
Usability & Electronic Health Records
Recent research on electronic health record (EHR) adoption has reported that among the top barriers to adoption, usability concerns equal those of security, privacy and system-integration. User Centric, a user experience research and design firm based in Chicago, is a thought leader in how to ensure EHRs are evaluated for usability. As part of a free webinar series, Managing Director Robert Schumacher, Ph.D., will present “Usability & Electronic Health Records”
03-17-2010 | Health & Medicine
Novalung GmbH
Novalung records 50% growth
The innovative therapies for lung failure from medical device company Novalung GmbH continue to gain acceptance. Additional financing will allow the Talheim (Germany) based company to accelerate the development of new products. Novalung GmbH increased sales by 50% in 2009. The positive trend continues through the first months of 2010. The increasing acceptance of the company’s innovative therapies for lung failure both in Germany and abroad is driving continuing growth. Manufacturing
07-07-2009 | Business, Economy, Finances, B …
Rödl & Partner
Rödl & Partner records further growth
Rödl & Partner, the international legal advisory and accounting firm, continues to record growth. In the 2008 business year (31st Dec., 2008) total turnover increased by 8.6 per cent to € 209.4 million. Business outside the German home market achieved a turnover of € 87.4 million and in Germany the figure reached € 122 million. In the same period, the number of staff rose to 3,000. "Rödl & Partner has successfully
01-27-2009 | Leisure, Entertainment, Miscel …
Chavis Records
Keel Sign With Chavis Records
On Monday, January 26th, Ron Keel announced on “Eddie Trunk Live” on Sirius/XM radio that the KEEL Reunion has been confirmed for a prime slot on the Rocklahoma 2009 Main Stage. KEEL – the band that gave you “The Right To Rock” – is back in action for their 25th Anniversary Reunion, performing and recording together for the first time in 20 years. Ron Keel, along with guitarists Marc Ferrari &
Comments about openPR
Your portal is fast, simple, and easy to use. Others may have more functions but they also demand more editing time, you have to preformat the text in order to achieve a good result etc. I think openPR is really fantastic!
Andreas Knepper, wallmedien AG